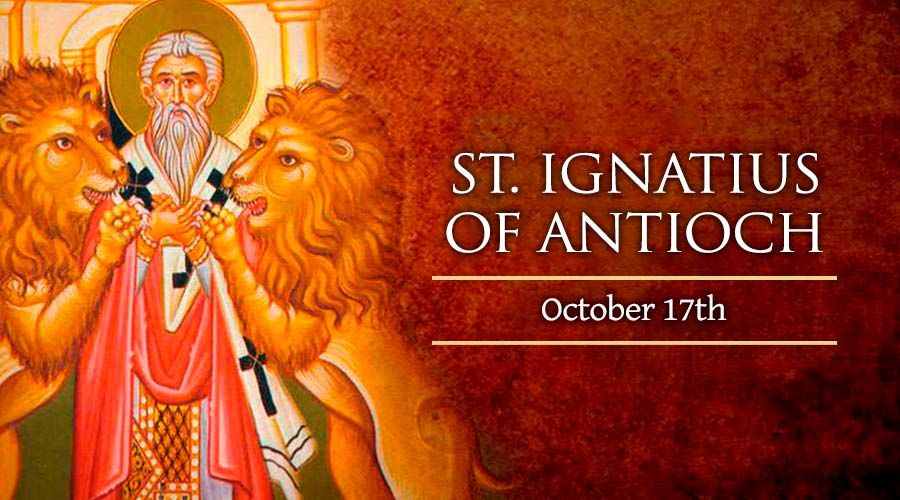 On Oct. 17, the Roman Catholic Church remembers the early Church Father, bishop, and martyr Saint Ignatius of Antioch, whose writings attest to the sacramental and hierarchical nature of the Church from its earliest days. Eastern Catholics and Eastern Orthodox Christians celebrate his memory on Dec. 20.

In a 2007 general audience on St. Ignatius of Antioch, Pope Benedict XVI observed that “no Church Father has expressed the longing for union with Christ and for life in him with the intensity of Ignatius.” In his letters, the Pope said, “one feels the freshness of the faith of the generation which had still known the Apostles. In these letters, the ardent love of a saint can also be felt.”

Born in Syria in the middle of the first century A.D., Ignatius is said to have been personally instructed – along with another future martyr, Saint Polycarp – by the Apostle Saint John. When Ignatius became the Bishop of Antioch around the year 70, he assumed leadership of a local church that was, according to tradition, first led by Saint Peter before his move to Rome.

Although St. Peter transmitted his Papal primacy to the bishops of Rome rather than Antioch, the city played an important role in the life of the early Church. Located in present-day Turkey, it was a chief city of the Roman Empire, and was also the location where the believers in Jesus' teachings and his resurrection were first called “Christians.”

Ignatius led the Christians of Antioch during the reign of the Roman Emperor Domitian, the first of the emperors to proclaim his divinity by adopting the title “Lord and God.” Subjects who would not give worship to the emperor under this title could be punished with death. As the leader of a major Catholic diocese during this period, Ignatius showed courage and worked to inspire it in others.

After Domitian's murder in the year 96, his successor Nerva reigned only briefly, and was soon followed by the Emperor Trajan. Under his rule, Christians were once again liable to death for denying the pagan state religion and refusing to participate in its rites. It was during his reign that Ignatius was convicted for his Christian testimony and sent from Syria to Rome to be put to death.

Escorted by a team of military guards, Ignatius nonetheless managed to compose seven letters: six to various local churches throughout the empire (including the Church of Rome), and one to his fellow bishop Polycarp who would give his own life for Christ several decades later.

Ignatius' letters passionately stressed the importance of Church unity, the dangers of heresy, and the surpassing importance of the Eucharist as the “medicine of immortality.” These writings contain the first surviving written description of the Church as “Catholic,” from the Greek word indicating both universality and fullness.

One of the most striking features of Ignatius' letters, is his enthusiastic embrace of martyrdom as a means to union with God and eternal life. “All the pleasures of the world, and all the kingdoms of this earth, shall profit me nothing,” he wrote to the Church of Rome. “It is better for me to die in behalf of Jesus Christ, than to reign over all the ends of the earth.”

“Now I begin to be a disciple,” the bishop declared. “Let fire and the cross; let the crowds of wild beasts; let tearings, breakings, and dislocations of bones; let cutting off of members; let shatterings of the whole body; and let all the dreadful torments of the devil come upon me: only let me attain to Jesus Christ.”

St. Ignatius of Antioch bore witness to Christ publicly for the last time in Rome's Flavian Amphitheater, where he was mauled to death by lions. “I am the wheat of the Lord,” he had declared, before facing them. “I must be ground by the teeth of these beasts to be made the pure bread of Christ.” His memory was honored, and his bones venerated, soon after his death around the year 107.