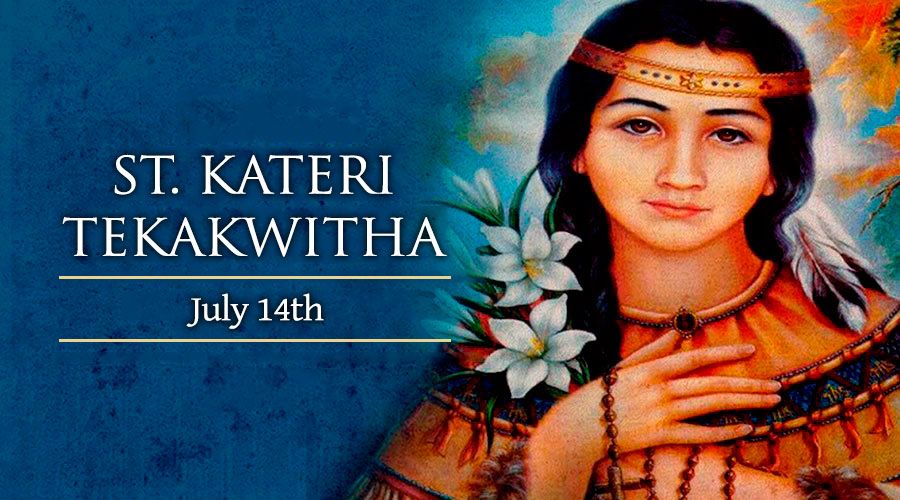 On July 14, the Church celebrates the feast day of St. Kateri Tekakwitha, the first Native American to be canonized. Known as the "Lily of the Mohawks," Kateri lived a life of holiness and virtue, despite obstacles and opposition within her tribe.

Kateri was born in Auriesville, New York, in 1656 to a Christian Algonquin woman and a pagan Mohawk chief. When she was a child, a smallpox epidemic attacked her tribe and both her parents died. She was left with permanent scars on her face and impaired eyesight. Her uncle, who had now become chief of the tribe, adopted her and her aunts began planning her marriage while she was still very young.

When three Jesuit fathers were visiting the tribe in 1667 and staying in the tent of her uncle, they spoke to her of Christ, and though she did not ask to be baptized, she believed in Jesus with an incredible intensity. She also realized that she was called into an intimate union with God as a consecrated virgin.

Kateri had to struggle to maintain her faith amidst the opposition of her tribe who ridiculed her for it and ostracized her for refusing the marriage that had been planned for her. When she was 18, Fr. Jacques de Lamberville returned to the Mohawk village, and she asked to be baptized.

The life of the Mohawk village had become violent and debauchery was commonplace. Realizing that this was proving too dangerous to her life and her call to perpetual virginity, Kateri escaped to the town of Caughnawaga in Quebec, near Montreal, where she grew in holiness and devotion to the Blessed Sacrament.

Kateri lived out the last years of her short life here, practicing austere penance and constant prayer. She was said to have reached the highest levels of mystical union with God, and many miracles were attributed to her while she was still alive.

She died on April 17, 1680 at the age of 24. Witnesses reported that within minutes of her death, the scars from smallpox completely vanished and her face shone with radiant beauty.

Devotion to Kateri began immediately after her death and her body, enshrined in Caughnawaga, is visited by many pilgrims each year. She was beatified by Pope John Paul II in 1980, and canonized by Pope Benedict XVI on October 21, 2012.