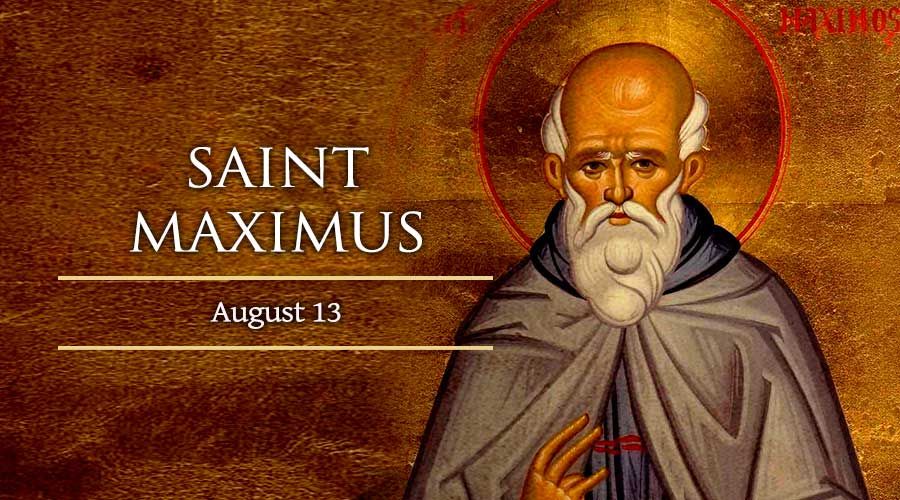 "To harbor no envy, no anger, no resentment against an offender is still not to have charity for him. It is possible, without any charity, to avoid rendering evil for evil. But to render, spontaneously, good for evil - such belongs to a perfect spiritual love." - Saint Maximus.

St. Maximus is also known as "the Theologian", and as "Maximus Confessor". He was born in Constantinople around the year 580, and died in exile August 13, 662. He worked with Pope Martin I against the Monothelist heresy, and attended the Lateran Council of 649. He was one of the chief doctors of the theology of the Incarnation and of ascetic mysticism, and remarkable as a witness to the respect for the papacy held by the Greek Church in his day.

This great man came from a noble family of Constantinople. He became first secretary to Emperor Heraclius, who greatly valued him, but despite the favor of the emperpr, Maximus resigned to the world and gave himself up to contemplation in a monastery at Chrysopolis, opposite Constantinople. He became abbot there- but seems to have left this retreat on account of its insecurity from hostile attacks.

Falsely accused of treason due to his defense of the orthodox faith, he was arrested and forcibly returned to Constantinople, where he spent several miserable years in prison, and at age 82 received his final sentence:

He was anathematized, and with him St. Martin and St. Sophronius. The prefect was ordered to beat them, to cut out their tongues and lop off their right hands, to exhibit them thus mutilated in every quarter of the city, and to send them to perpetual exile and imprisonment. A long letter of the Roman Anastasius tells us of their sufferings on the journey to Colchis where they were imprisoned in different forts. He tells us that St. Maxirmus foresaw in a vision the day of his death, and that miraculous lights appeared nightly at his tomb. The monk Anastasius had died in the preceding month; the Roman lived on until 666.

St. Maximus died for orthodoxy and obedience to Rome. He has always been considered one of the chief theological writers of the Greek Church, and has obtained the honorable title of the Theologian. He may be said to complete and close the series of patristic writings on the Incarnation, as they are summed up by St. John of Damascus.