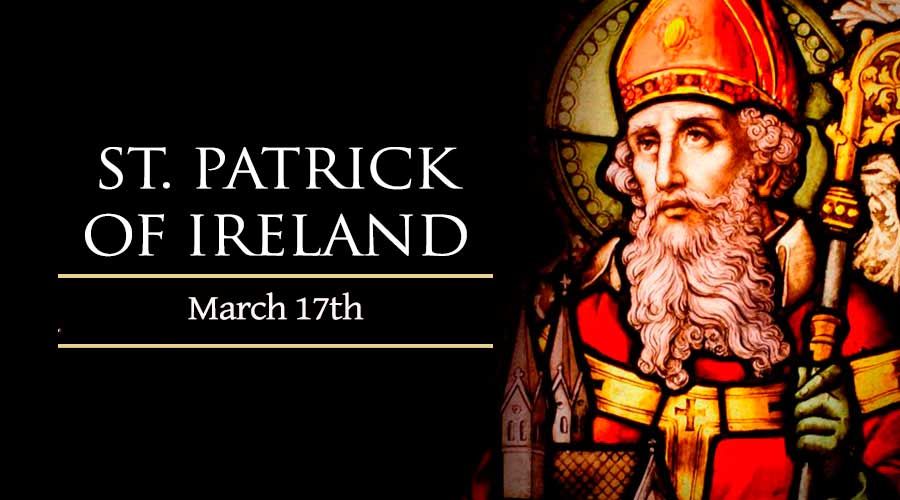 On March 17, Catholics celebrate St. Patrick, the fifth century bishop and patron of Ireland, whose life of holiness set the example for many of the Church's future saints.

St. Patrick is said to have been born around 389 AD in Britain. Captured by Irish raiders when he was about 16, St. Patrick was taken as a slave to Ireland where he lived for six years as a shepherd before escaping and returning to his home.

At home, he studied the Christian faith at monastic settlements in Italy and in what is now modern-day France. He was ordained a deacon by the Bishop of Auxerre, France around the year 418 AD and ordained a bishop in 432 AD.

It was around this time when that he was assigned to minister to the small, Christian communities in Ireland who lacked a central authority and were isolated from one another.

When St. Patrick returned to Ireland, he was able to use his knowledge of Irish culture that he gained during his years of captivity. Using the traditions and symbols of the Celtic people, he explained Christianity in a way that made sense to the Irish and was thus very successful in converting the natives.

The shamrock, which St. Patrick used to explain the Holy Trinity, is a symbol that has become synonymous with Irish Catholic culture.

Although St. Patrick's Day is widely known and celebrated every March the world over, various folklore and legend that surround the saint can make it difficult to determine fact from fiction.

Legends falsely site him as the man who drove away snakes during his ministry despite the climate and location of Ireland, which have never allowed snakes to inhabit the area.

St. Patrick is most revered not for what he drove away from Ireland, but flor what he brought, and the foundation he built for the generations of Christians who followed him.

Although not the first missionary to the country, he is widely regarded as the most successful. The life of sacrifice, prayer and fasting has laid the foundation for the many saints that the small island was home to following his missionary work.

To this day, he continues to be revered as one of the most beloved Saints of Ireland.

In March of 2011, the Irish bishops' conference marked their patron's feast by remembering him as “pioneer in an inhospitable climate.”

As the Church in Ireland faces her own recent difficulties following clerical sex abuse scandals, comfort can be found in the plight of St. Patrick, the bishops said.

They quoted The Confession of St. Patrick, which reads: “May it never befall me to be separated by my God from his people whom he has won in this most remote land. I pray God that he gives me perseverance, and that he will deign that I should be a faithful witness for his sake right up to the time of my passing.”