Father Anthony Bus, host of “Winds of Change” radio program, will air at noon Central Time on WNDZ 750 AM Portage/Chicago, along with a host of other EWTN radio programs, beginning Sept. 1. | EWTN

EWTN Global Catholic Radio has announced that nine million more listeners in the Chicagoland area and beyond will have the ability to tune into EWTN Radio's life changing programs.

EWTN Radio affiliate WFSI, which currently broadcasts on 88.5 FM/Antioch, will also begin broadcasting on WNDZ 750 AM Portage/Chicago. Starting Sept. 1, Catholics can now tune in from sunrise to sunset Monday through Friday to this new Catholic station. Coverage will include all of Chicagoland, and parts of Gary, Indiana, Southwest Michigan, and Southern Wisconsin.

EWTN programming will be broadcast along with current weekday programs created by the Archdiocese of Chicago, and "Winds of Change," hosted by Father Bus of St. Stanislaus Kostka Parish in Chicago.

Angela Tomlinson, station manager of WSFI Catholic Radio 88.5 FM/750 AM, said the "spectacular response" of listeners to EWTN's programming and the countless stories of conversions and reversions convinced the WSFI board that they needed to reach more people.

"From its inception, WSFI always wanted to continue Mother Angelica's legacy of treating listeners like family," Tomlinson said. "That's why we not only air national programs, but programs produced here in Chicagoland, programs that allow local charities to shine. Lots of people are staying home now more than ever. They need the encouragement and support that our programming provides. This programming really transforms lives. It's especially important now when the world is living in such fear."

"When it comes to Catholic media, EWTN is the best in the world, and our listeners will love their national programming, along with WSFI's local shows that originate out of [WSFI's] Libertyville studio," said WNDZ General Manager Mark Pinski.

"The growth of Catholic radio in this country really began with Mother Angelica," Warsaw said. "Mother launched the world's largest privately-owned shortwave radio facility on Dec. 28, 1992, and, in February 1996, EWTN launched a worldwide AM/FM radio service. Mother's vision was to build Catholic radio in this country, and around the world, by offering quality Catholic programming to local stations free of charge."

EWTN radio content is available on the Internet (www.ewtn.com/everywhere/radio), and on more than 350 U.S. terrestrial radio affiliates as well as numerous international affiliates. It is also available through the free EWTN app, SIRIUS/XM Satellite Radio Channel 130, iHeartRadio, and other audio streaming services. The Network's Spanish-language service EWTN Radio Católica Mundial, broadcasts around the clock in Spanish.

As EWTN Radio General Manager Jack Williams noted: "The opportunity that WSFI has in Chicago is one of the most important in the history of EWTN radio. I am thrilled that WSFI wants to grow their listening audience so that the Eternal Word, Jesus Christ, is known throughout Chicagoland."

In its 40th year, EWTN is the largest religious media network in the world. EWTN's 11 global TV channels are broadcast in multiple languages 24 hours a day, seven days a week to over 380 million television households in more than 150 countries and territories. EWTN platforms also include radio services transmitted through SIRIUS/XM, iHeart Radio, and over 500 domestic and international AM & FM radio affiliates; a worldwide shortwave radio service; one of the largest Catholic websites in the U.S.; electronic and print news services, including Catholic News Agency, the National Catholic Register newspaper, and several global news wire services; as well as EWTN Publishing, its book publishing division. 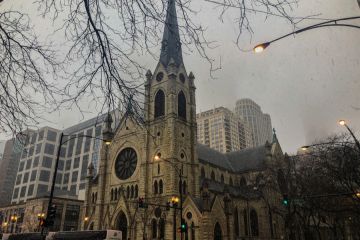 “Hispanic young people are the future of this country and seeing that many are losing their Catholic faith serves as a reminder to me of how important it is to live our baptismal call, and that we must take responsibility and initiative to do something about it,” Del Real said in comments to CNA.