Catholic nun who secretly baptized babies under communism dies at 92 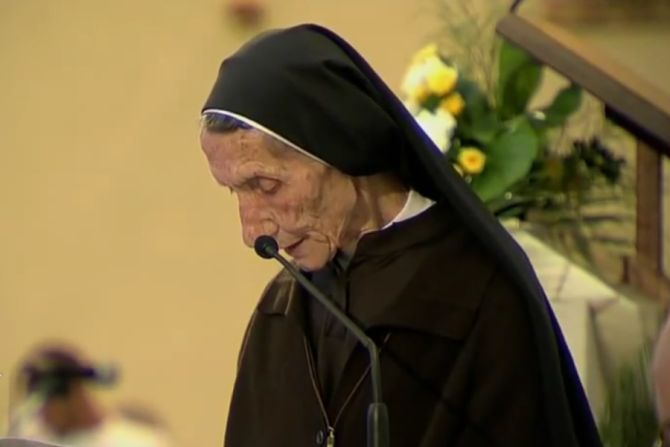 An Albanian nun who inspired Pope Francis with her courageous faith under communist persecution has died at the age of 92.

Sister Marije Kaleta risked her life to bring Holy Communion to the sick and dying under the regime of dictator Enver Hoxha, whose communist government destroyed churches and martyred Catholics in its effort to create an atheist state.

Albania is a country of 2.8 million people on southeastern Europe’s Balkan Peninsula, bordered by Montenegro, Kosovo, North Macedonia, and Greece. It was under communist rule from the 1940s to 1992.

In a meeting with Pope Francis in Albania in 2014, the Stigmatine sister shared the story of how she baptized babies in secret during this time of persecution.

Pope Francis was so moved by Kaleta’s story that he mentioned it in a homily four years later as “a beautiful example of the Church as a mother.”

“I baptized not only the children of the villages, but also all those who showed up at my door,” Kaleta told the pope in the cathedral of Tirana.

She recalled that one time when she was on her way home, she heard a voice from behind her.

“It was a woman with a baby girl in her arms who came running towards me and asked me to baptize her,” she said.

Kaleta said that she felt some fear because she knew that this woman was a communist.

“I told her I didn’t have anything to baptize her with because we were on the road, but she expressed so much desire that she told me there was a canal with water nearby,” she said.

“I told her I didn’t have anything to collect the water with, but she insisted that I baptize that child, and seeing her faith, I took off my shoe, which was made of plastic, and I filled it with water from the canal and baptized her.”

Born in Nënshat, northern Albania, on Nov. 10, 1929, Kaleta felt a call to religious life at a young age. Thanks to the help of her uncle who was a priest, she found her vocation in the Stigmatine Sisters.

She entered the convent in the 1940s, not knowing at the time that she would have to wait nearly 50 years before she would be able to make her final vows.

The communist regime forced her to leave and return home to her parents seven years after entering the convent.

Following her parents’ death, she lived alone and learned “to keep the faith alive in the hearts of the faithful, although secretly.”

“Thanks to the consent of the priests, I kept the Blessed Sacrament in a cabinet at my home and brought it to the sick and dying,” she said.

As communist rule came to an end in Albania, Kaleta was able to make her final vows in 1991.

“When I think of it, I wonder how we were able to endure such terrible sufferings, but I know the Lord gave us strength, patience and hope,” she said

“The Lord gave strength to those He called, in fact he has repaid me from all my sufferings here on earth,” she added, saying that she “had the fortune of becoming a religious.”

Kaleta died on Jan. 2 in her convent in Shkodër, northern Albania. Among the powerful moments on Pope Francis’ Sept. 21 trip to Albania was the Holy Father’s encounter with an 85 year-old Franciscan Stigmatine nun, who recalled witnessing to the faith in the midst of the Communist regime. Pope Francis only spent 11 hours in Albania when he visited the country in 2014. But for some, his trip was life-changing. During 40 years of communist rule in Albania – which in 1967 declared itself the first completely atheist country in the world – praying, making the sign of the cross, wearing a crucifix around one’s neck, or any other evidence of being a believer in God were treated as crimes.