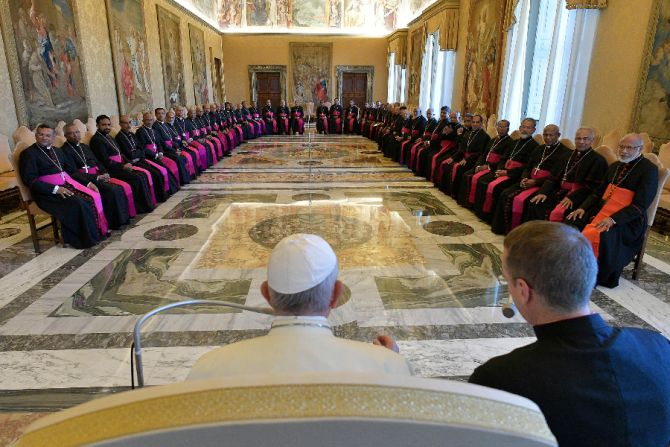 Pope Francis addresses bishops of the Syro-Malabar Catholic Church at the Vatican on Oct. 3, 2019. | Vatican Media.

Pope Francis has urged Syro-Malabar Catholics opposed to the introduction of a uniform liturgy to take the “difficult and painful step” of accepting the change.

In a three-page letter addressed to members of the Archeparchy of Ernakulam-Angamaly, the pope noted that the Synod of Bishops of the Eastern Catholic Church based in India had endorsed the move.

He said that as of Nov. 28, 2021, the date selected for the transition, 34 eparchies had decided to enact the synodal decision.

“Regrettably, this was not the case with yourselves,” he wrote in the March 25 letter. “You chose instead to continue following your particular liturgical form, albeit after careful reflection, in isolation from the rest of the Syro-Malabar Church.”

The Eucharistic liturgy of the Syro-Malabar Church, known as the Holy Qurbana, has been the subject of a decades-long dispute. The controversy is centered on a debate about which direction the priest should face when celebrating the liturgy.

Protests against the adoption of a uniform liturgy have included a hunger strike by priests and the burning of effigies of cardinals.

The authenticity of the pope’s letter was reportedly questioned in India, but Vatican News, the online news portal of the Holy See, published a summary on April 1.

In his letter, the pope said he wished to “offer a paternal exhortation to adhere promptly to the synodal decision concerning the form of celebration of the Holy Qurbana prior to Easter 2022, as determined by the Synod.”

He acknowledged that some parishes might need more time to introduce the change “in order to carry out a more ample catechesis.”

“This is understandable, as long as it does not call into question the synodal decision,” he said.

“The dispensation would be given only for a determined amount of time in accordance with the Code of Canons of the Eastern Churches.”

This is the second time that Pope Francis has intervened directly in the liturgical debate.

In July 2021, he wrote a letter exhorting “all the clergy, religious and lay faithful to proceed to a prompt implementation of the uniform mode of celebrating the Holy Qurbana, for the greater good and unity of your Church.”

In his latest letter, the pope acknowledged the sacrifices that the change would require on the part of priests and laypeople.

“I realize that I am asking you to take a difficult and painful step, but I am certain that I will find in you examples of priests and lay faithful who are ready to listen to the voice of the Lord and trust in the counsel and plea of the pope,” he said.

“This has been a distinguishing characteristic of the Syro-Malabar Church throughout the centuries. Your faithfulness has allowed you to overcome numerous historical misunderstandings and in our time has led to a flourishing of vocations and missionary zeal.”

“The Lord will not forget the sacrifice that you are making and, in the end, will open your hearts to the abundance of his blessings.”

Priests of the Archeparchy of Ernakulam-Angamaly will reportedly discuss the pope’s letter at a meeting on April 5.

More than 300 priests met on March 17 and passed a unanimous resolution urging Archbishop Antony Kariyil, the Archiepiscopal Vicar of Ernakulam-Angamaly, “not to withdraw the existing dispensation for Mass facing the people in the archdiocese.”

The archdiocese’s spokesman Father Mathew Kilukkan said that the resolution “called for an official recognition of this liturgical variant of the Holy Eucharist by the Church.”

“The withdrawal of the existing exemption will lead to major conflicts and pastoral crises in the parishes,” he said on March 17. ‘The archdiocese completely condemns such unchristian protests,’ a spokesman said.