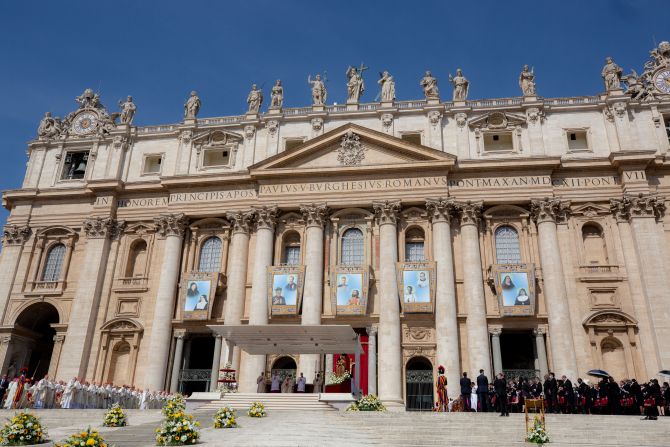 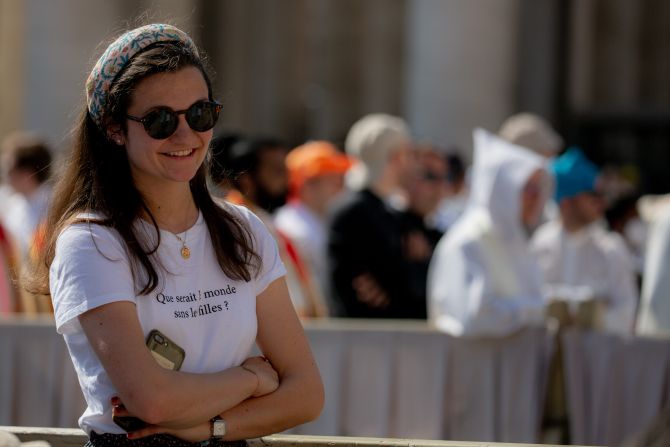 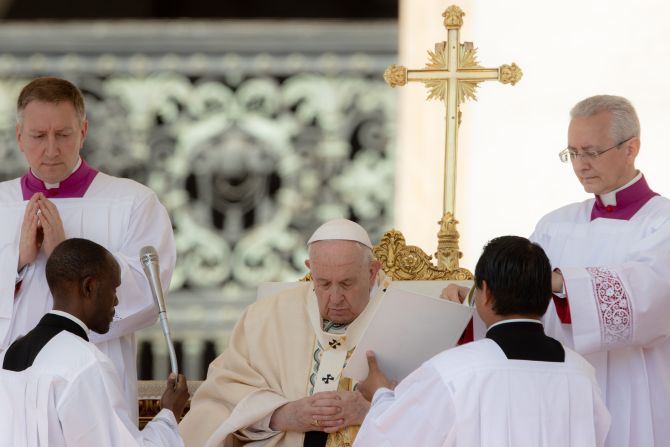 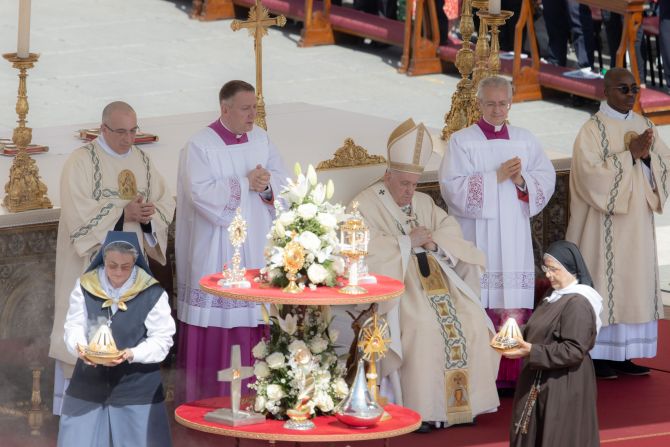 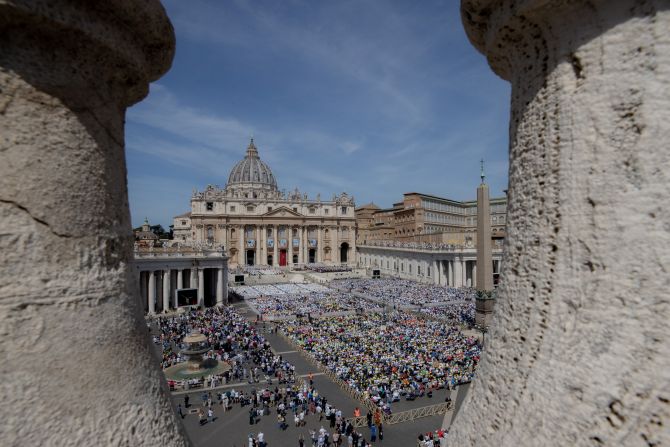 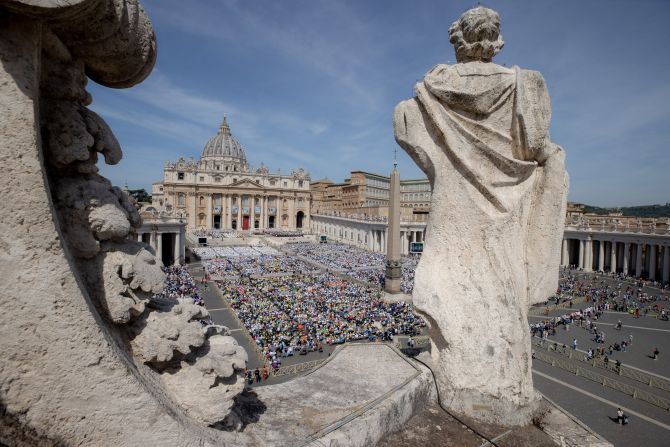 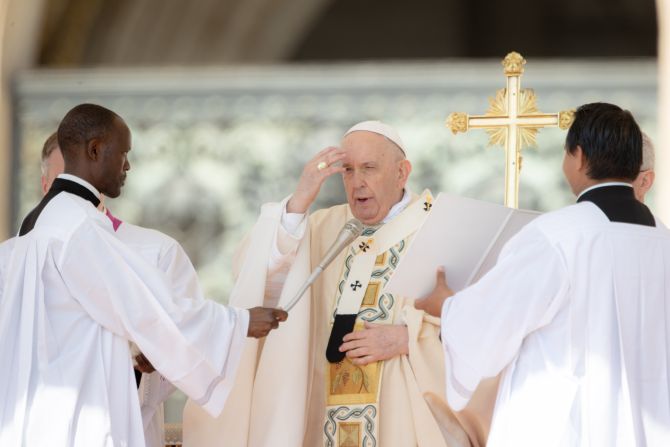 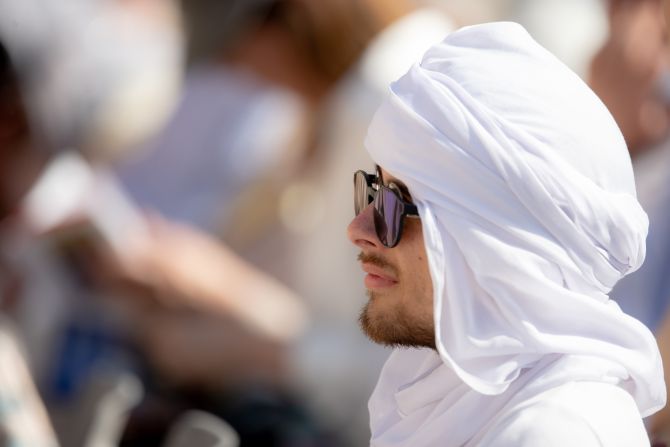 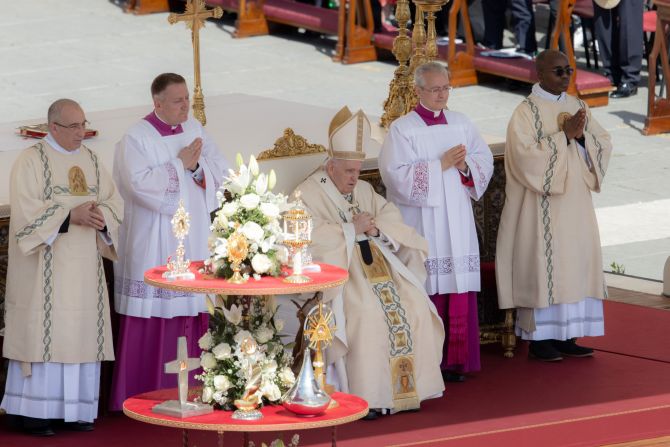 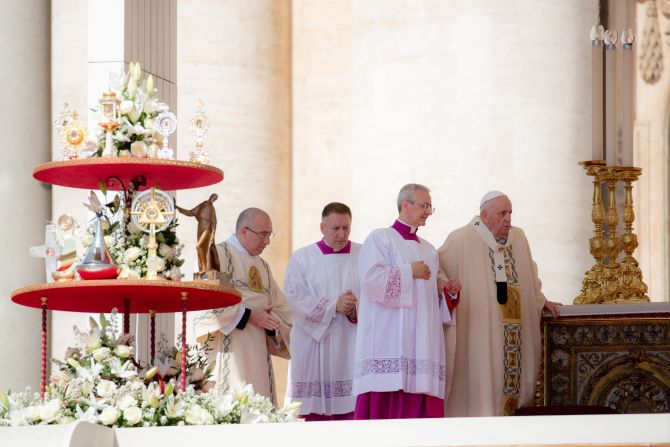 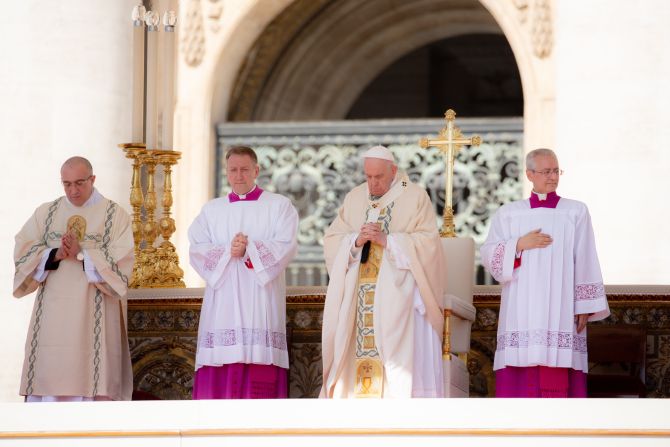 Pope Francis on Sunday recognized 10 new saints of the Catholic Church during a canonization Mass in St. Peter’s Square.

It was the Church’s first canonization since that of St. John Henry Newman and four others in October 2019.

Soon there will be 10 new saints in the Catholic Church! pic.twitter.com/acANLcQlUf

Religious men and women, priests, and a lay man are among the 10 people who are recognized to be in heaven after living lives of exemplary holiness on earth.

“Holiness does not consist of a few heroic gestures, but of many small acts of daily love,” Pope Francis said during his homily on May 15, a sunny, warm day in Rome.

Pope Francis, who has been suffering from knee pain and has used a wheelchair to avoid walking in recent days, was able to stand for a short time and walk short distances during the Mass. He had assistance and walked visibly slower than in the recent past.

The Mass began with the rite of canonization, which included the reading of short biographies of each blessed, read by Cardinal Marcello Semeraro, prefect of the Congregation for the Causes of Saints.

A litany of saints was sung before Pope Francis recited the formula of canonization.

He declared: “For the honor of the Blessed Trinity, the exaltation of the Catholic faith and the increase of the Christian life, by the authority of Our Lord Jesus Christ, and of the Holy Apostles Peter and Paul, and our own, after due deliberation and frequent prayer for divine assistance, and having sought the counsel of many of our brother bishops, we declare and define Blessed Titus Brandsma, Lazarus known as Devasahayam, César de Bus, Luigi Maria Palazzolo, Giustino Maria Russolillo, Charles de Foucauld, Marie Rivier, Maria Francesca di Gesu Rubatto, Maria di Gesù Santocanale, and Maria Domenica Mantovani to be saints and we enroll them among the saints, decreeing that they are to be venerated as such by the whole Church. In the name of the Father, and of the Son, and of the Holy Spirit.”

“To serve the Gospel and our brothers and sisters, to offer our lives without expecting anything in return, or any worldly glory: this is our calling. That was how our fellow travelers canonized today lived their holiness,” Pope Francis said.

The new saints are:

-Charles de Foucauld: A French soldier and explorer who became a Trappist monk and Catholic missionary to Muslims in Algeria. Known as Brother Charles of Jesus, he was killed in 1916 at the age of 58.

-Titus Brandsma: A Dutch priest, professor, and journalist who opposed Nazi propaganda in Catholic newspapers. He was killed by lethal injection in Dachau in 1942.

-Devasahayam Pillai: A layman from India who was tortured and martyred after converting from Hinduism to Catholicism in the 18th century.

-Marie Rivier: The founder of the Congregation of the Sisters of the Presentation. The Frenchwoman founded the order in 1796, at the age of 28, during the Reign of Terror.

-Maria Francesca of Jesus: A 19th-century missionary founder who crossed the Atlantic Ocean seven times by boat to establish an order of Capuchin sisters in Uruguay, Argentina, and Brazil.

-Maria Domenica Mantovani: The first general superior of the Institute of the Little Sisters of the Holy Family, which she co-founded to serve the poor, orphaned, and the sick in Italy in 1892.

-Maria of Jesus Santocanale: The founder of the Capuchin Sisters of Immaculate Mary of Lourdes in Sicily in 1910. She spent most of her free moments, day or night, in front of the tabernacle.

-César de Bus: A French Catholic priest who founded two religious congregations in the 16th century. He was a zealous preacher and catechist, who performed many works of charity.

-Luigi Maria Palazzolo: An Italian priest who is known for having established the Sisters of the Poor, opened an orphanage, and worked for the poor.

-Giustino Maria Russolillo: The founder of the religious congregations of the Vocationist Fathers, the Vocationist Sisters and of the Secular Institute of the Apostles of Universal Sanctification in Italy. The priest was devoted to educating young people and cultivating their vocations.

Priests heading out into the crowd to give Holy Communion to an estimated 45,000 people. pic.twitter.com/QCf3NRU4Su

The canonization Mass was attended by an estimated 45,000 people, many of whom traveled from outside Italy.

In remarks at the conclusion of Mass before the Regina Caeli prayers, the pope greeted the official delegations from several countries which had attended the canonizations. He also greeted all the faithful from all around the world who had attended the Mass.

Pope Francis encouraged Catholic Christians to imitate the example of the saints.

“It is good to see that, with their evangelical witness, these Saints have fostered the spiritual and social growth of their respective nations and also of the entire human family,” the pope said. “While sadly in the world distances grow, and tensions and wars increase, may the new saints inspire solutions of togetherness and ways of dialogue, especially in the hearts and minds of those who hold positions of great responsibility and are called upon to be agents of peace, not war.”

“And now, let us turn to the Virgin Mary, so that she may help us joyfully imitate the example of the new saints,” said Pope Francis.