Pope Francis meets Bono at the launch of the Scholas Occurrentes International Educational Movement at the Pontifical Urban University in Rome, May 19, 2022. | Vatican Media. 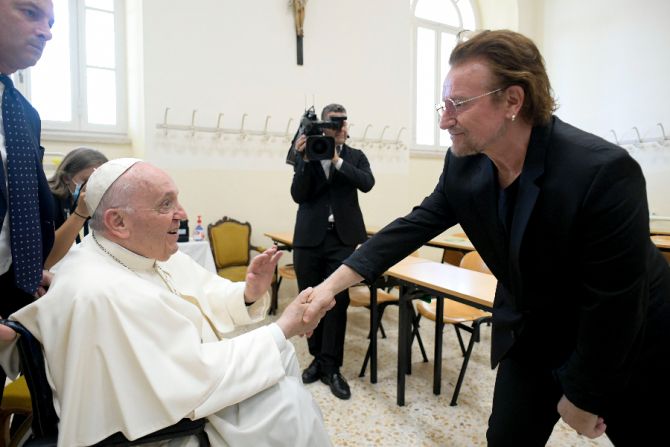 Pope Francis formally launched an international educational movement on Thursday in the presence of U2 singer Bono.

The pope inaugurated the Scholas Occurrentes International Educational Movement on May 19 during a meeting with young people at Rome’s Pontifical Urban University.

The 85-year-old pope sat in a wheelchair as he watched student presentations, before engaging in a question-and-answer session.

Bono asked Pope Francis about the role of women and girls in tackling the climate crisis. The pope replied by pointing out that people speak of “Mother Earth,” not “Father Earth,” and indicating that women played a leading role.

Scholas Occurrentes grew out of the Escuela de Vecinos (“Neighborhood School”) and Escuelas Hermanas (“Sister Schools”) programs, developed by the future Pope Francis when he was archbishop of Buenos Aires, Argentina.

The organization was established as a pontifical foundation in 2015, charged with supporting poor and underserved communities around the world through education.

The pope signed a decree known as a chirograph on March 19 establishing the pontifical foundation as a private association of the faithful of an international character.

“Taking into account that the Pontifical Foundation Scholas Occurrentes today continues to expand its beneficial action and to structure itself as a community of communities and an educational movement of international character, it requires a new juridical form in keeping with this new reality,” said the decree, released by the Vatican on May 17. The pope watched a show called ‘The faces of the pandemic.’

Charity is a necessary part of politics, Pope Francis told youth from around the world on Thursday.

The Pontifical Foundation Scholas Occurentes, which is charged with promoting education in underserved and poor communities, has received millions in donations and agreements with organizations in recent years, without having built any schools in underserved neighborhoods.