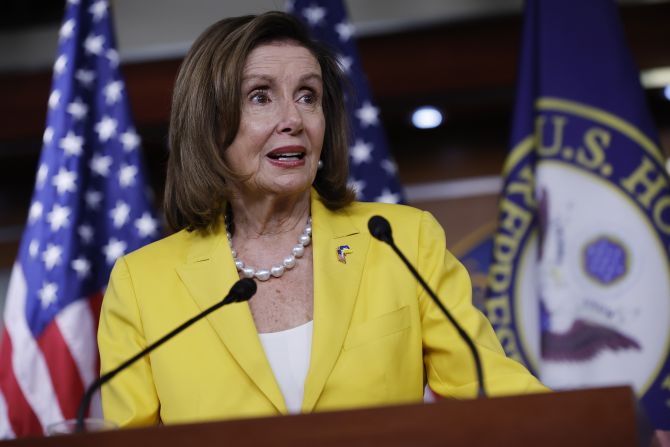 Speaker of the House Nancy Pelosi (D-CA) talks to reporters during her weekly news conference in the U.S. Capitol Visitors Center on June 16, 2022 in Washington, D.C. | Chip Somodevilla/Getty Images)

“I’m a very Catholic person and I believe in every woman’s right to make her own decisions,” the Democrat from California said during her weekly press conference on Capitol Hill.

The Catholic Church considers abortion — the destruction of a human person — a grave evil.

At the same press conference, Pelosi declined to say whether she agreed with Pope St. John Paul ll and Pope Francis that “abortion is murder.”

“What I agree on is that whatever I believe, agree with the popes on, is not necessarily what public policy should be in the United States as people make their own judgments, honor their own responsibilities, and tend to the needs of their families,” she responded.

Pelosi’s comments came after she was asked, among other things, about Republican claims that Democrats have remained silent about recent attacks by pro-abortion activists targeting churches and pro-life pregnancy centers as the Supreme Court prepares to decide a case that could overturn Roe v. Wade, which legalized abortion in 1973.

In response to the attacks, several Republican senators and congressmen have called on Department of Justice to take action. More than 100 U.S. House members supported an investigation into “these acts of domestic terrorism” in a June 15 letter to Attorney General Merrick Garland. Sixteen senators sent a June 7 letter to Garland. Sen. Josh Hawley of Missouri sent a June 14 letter and Sen. Marco Rubio of Florida sent a June 15 letter to Garland. SBA Pro-Life America and CatholicVote, along with other pro-life and political organizations, also sent Garland a letter demanding action.

In her response, Pelosi said nothing about the attacks.

“A woman has a right to choose, to live up to her responsibility,” Pelosi began. “It’s up to her, her doctor, her family, her husband, her significant other, and her god.” You can hear her remarks in the video below beginning at the 18:00 mark.

She called “talk of politicizing all of this” “something uniquely American and not right.”

Pelosi also noted that "very Catholic countries" such as Ireland, Italy, and Mexico have had legislative initiatives "to expand a woman’s right to choose."

Only On @EWTNNewsNightly @SpeakerPelosi was asked about the attacks by domestic terrorist group on #ProLife facilities taking place across the nation. The Speaker DID NOT denounce fire bombs or vandalism, instead elaborated on her pro-#abortion agenda, follow @ErikRosalesNews pic.twitter.com/jeupDtt6hk

Over the years, Pelosi has defended abortion multiple times while citing her Catholic faith. Archbishop Salvatore J. Cordileone announced on May 20 that Pelosi may no longer receive Holy Communion in the Archdiocese of San Francisco. Several other archbishops and bishops followed his lead. The House Speaker made her first public comments since being banned from receiving Communion in her home diocese because of her advocacy of legalized abortion.