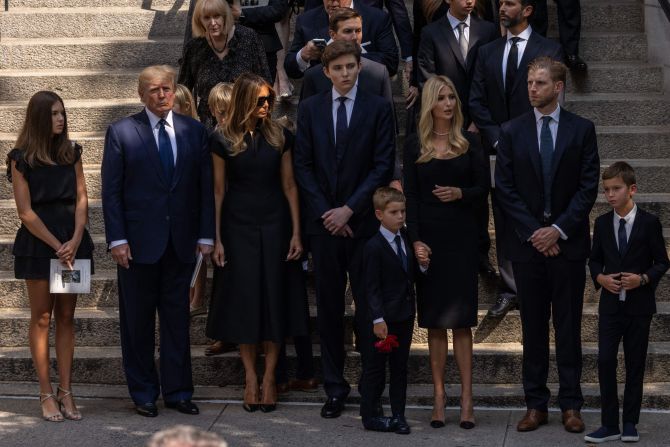 Following the funeral, the New York socialite was laid to rest at the Trump National Golf Club in Bedminster, N.J., where “ground was consecrated so Ms. Trump could have a traditional Catholic burial,” the New York Times reported.

The rose-gold coffin was lowered into a 10-plot cemetery overlooking the first hole of the golf course, the New York Post reported. Family and close friends attended the burial service held the same day as the funeral. Donald and his three children with Ivana — Donald Jr., Ivanka, and Eric — spoke.

A source told the outlet that Trump was laid to rest near the main clubhouse in a private, grassy location marked by a “very discreet piece of granite engraved with her name.”

Before the funeral, CNA confirmed with St. Vincent Ferrer Catholic Church that Trump was Catholic.

The former president attended the New York funeral with his wife, Melania, and their son, Barron. Donald Jr., Ivanka, and Eric also came.

Roughly 100 people stood outside of the church to pay respects to Trump, as well as to see the former president and his family, according to the New York Times. One person even held up a sign that read, “PRAYERS AND CONDOLENCES TRUMP FAMILY. GOD BLESS AND PROTECT YOU.”

The service reportedly lasted around two hours, with speeches from each of Trump’s three children and other loved ones. The New York Times reported that most of the speeches “focused on her indefatigable drive, shaped by growing up in Czechoslovakia behind the Iron Curtain.” Her children shared anecdotes about their childhoods with her, noting her forceful yet loving parenting style.

Former nanny of the Trump children, Dorothy Curry, said, “Ivana, we have reached out to you many, many times, but obviously we didn’t reach out far enough,” in reference to some of the more difficult times in Trump’s life.

Curry added: “We all basically let go and let God, and now you are totally in God’s hands.”

The New York Times reported that pallbearers brought Trump’s golden coffin to a Frank E. Campbell Funeral Home hearse, and her remains were then taken to her final resting place in New Jersey. Ivana Trump's funeral to be held in Catholic church Nestled in the farmland of Port Tobacco, Maryland stands the oldest Carmelite monastery in America. Founded in 1790, the Mount Carmel Monastery was the first Catholic convent for religious women in the U.S.