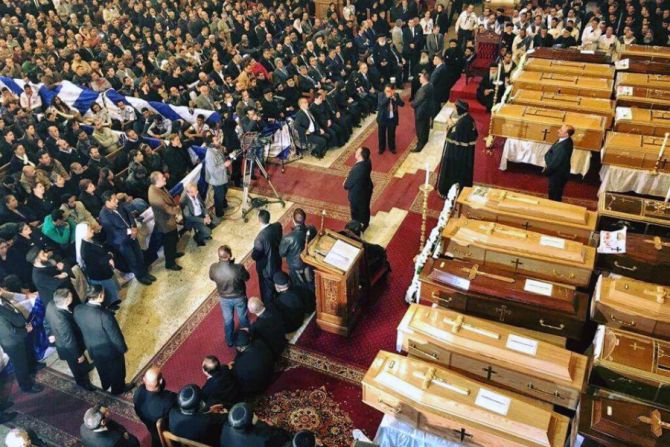 Tawadros II, Coptic Orthodox Patriarch of Alexandria, presides over a funeral liturgy for victims of the Dec. 11, 2016 bomb attack on his cathedral. | Aid to the Church in Need.

A massive fire at a Coptic Orthodox church in Egypt claimed the lives of 41 people on Sunday — a devastating blow for a Christian community long beset by persecution and hardship.

Though there is no evidence of foul play in this case, with an electrical fault so far being blamed for the fire, Egypt’s Christian minority has long been regarded as a second-class group among the Muslim majority populace, and in recent years several major terrorist attacks have targeted the Coptic Christian community.

What is the Coptic Church?

Because it rejected the Council of Chalcedon of 451, the Coptic Orthodox Church does not recognize the Catholic pope and instead has its own pope, who is the bishop of Alexandria and claims apostolic succession from St. Mark.

Its highest form of worship, akin to the Catholic Mass, is the Divine Liturgy.

Why are they persecuted?

Coptic Christians have been a frequent target of terrorism in Egypt, especially since the rise of the Islamic State. Beyond a general anti-Christian sentiment among Muslims, Egypt’s Copts have been accused by their Muslim neighbors of aiding the rise to power of the President Abdel Fattah el-Sissi, who came to rule after the Muslim Brotherhood was ousted in a 2013 military coup and who has enjoyed the public support of Coptic leaders.

In Feb. 2015, the Islamic State released a video online showing masked fighters beheading 21 men as they knelt on a Libyan beach wearing prison-style orange jumpsuits. The Egyptian government and the Coptic Orthodox Church later confirmed the video's authenticity, and the men are now honored as saints in the Coptic church.

Twenty-nine people were killed in a bombing at St. Mark's Coptic Orthodox Cathedral in Cairo in December 2016. The Islamic State took credit for the bombing and released a video threatening to target Christian "crusaders" in Egypt. And on Palm Sunday in 2017, two Islamic State suicide bombings at Coptic churches in Egypt claimed the lives of 47 people.

During the pandemic, Coptic Christian women and girls have reportedly been abducted and forcefully converted to Islam, and some Christian communities have experienced deprivation of resources.

Will it get better?

The current Egyptian government under President el-Sissi has condemned the attacks and in the past has pledged to protect embattled Christian minorities in the country, but Christians still suffer most in rural areas outside the capital of Cairo where the national government has less oversight. This sometimes occurs in the form of government regulations that target Christians. For example, Egyptian law for decades retained strict Ottoman-era rules on building or repairing churches. While many of the older restrictions were repealed in 2016, critics still say that most applications to build or repair churches are rejected, especially requests from poor or rural areas or areas where Christians are a small minority.

In a June 24, 2021 report to the Catholic charity foundation Aid to the Church in Need United States, Bishop Kyrillos William Samaan of the Coptic Eparchy of Assiut said that Christians remain underrepresented in many sectors and are sidelined in administrative positions. At least 40 people have died in a Coptic church fire in Egypt — most of them were children under the age of six, according to media reports.