A ‘supermarket of religions,’ God’s will, and the wisdom of a tweaked declaration 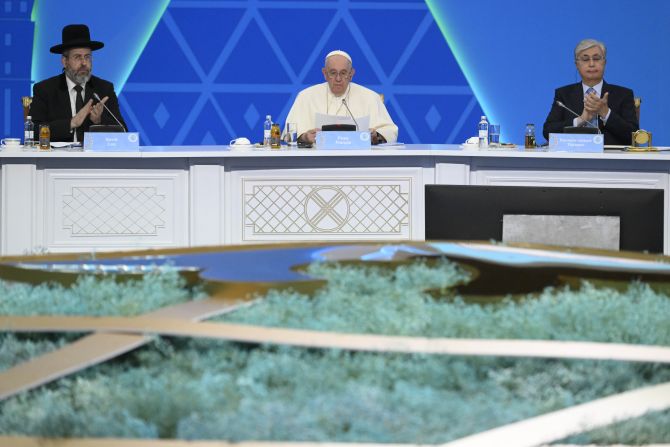 A sensitive passage in the final declaration of the congress that brought Pope Francis to Kazakhstan Sept. 13–15 appears to have been changed after it found the approval of attendants.

Initially, point 10 of the declaration said: “We note that pluralism and differences in religion, skin color, gender, race, and language are expressions of the wisdom of God’s will in creation. Thus any incident of coercion to a particular religion and religious doctrine is unacceptable.”

A changed wording — apparently made after the approval of the declaration by its participants and the subsequent publication — instead said the following:

“We note that pluralism in terms of differences in skin color, gender, race, language and culture are expressions of the wisdom of God in creation. Religious diversity is permitted by God and, therefore, any coercion to a particular religion and religious doctrine is unacceptable.”

This new wording was published by the congress website and local media on Sept. 15, apparently hours after the previous version, which was streamed by Vatican News and EWTN — and can still be found online.

The congress declaration almost verbatim drew on the Document on Human Fraternity for World Peace and Living Together, signed by Pope Francis and a prominent sheik in Abu Dhabi in February 2019, which states: “The pluralism and the diversity of religions, colour, sex, race and language are willed by God in His wisdom, through which He created human beings,” as per the version published by the Vatican.

Speaking to EWTN on Sept. 14 in Kazakhstan, Bishop Athanasius Schneider said the congress attended by Pope Francis risked giving the impression of a “supermarket of religions.”

While praising the congress for promoting “understanding, harmony, and peace,” Schneider warned, reported the National Catholic Register, “there is also a danger that we the Catholic Church should not appear simply as one of the many religions.”

“We’re not one of the many religions, we’re the only one true religion which God commanded to all people to believe,” Schneider told EWTN’s Alexey Gotovskiy. “There is no other way to salvation.”

Schneider is auxiliary bishop of the Archdiocese of Astana, Kazakhstan, and actively took part in the papal visit. He has previously raised concerns about the wording of the Abu Dhabi document that God wills a “pluralism of religions.”

In what appears to be an answer to these concerns, Pope Francis said in a general audience in April 2019: “Why does God allow many religions? God wanted to allow this: Scolastica theologians used to refer to God’s voluntas permissiva. He wanted to allow this reality: there are many religions. Some are born from culture, but they always look to heaven; they look to God.”

“But what God wants is fraternity among us and in a special way, this was the reason for the trip, with our brothers, Abraham’s children like us, the Muslims. We must not fear differences. God allowed this. We should be afraid were we to fail to work fraternally to walk together in life,” the pope added.

The Second Vatican Council, “[b]asing itself upon Sacred Scripture and Tradition,” teaches “that the Church, now sojourning on earth as an exile, is necessary for salvation.”

At the same time, “Lumen Gentium,” the dogmatic constitution on the Church, states that “the plan of salvation also includes those who acknowledge the Creator. In the first place amongst these there are the Muslims, who, professing to hold the faith of Abraham, along with us adore the one and merciful God, who on the last day will judge mankind.” The resolution, passed Sept. 15, criticized the arbitrary “arrest of Bishop Rolando Álvarez” and called “for his and others’ immediate and unconditional release.”