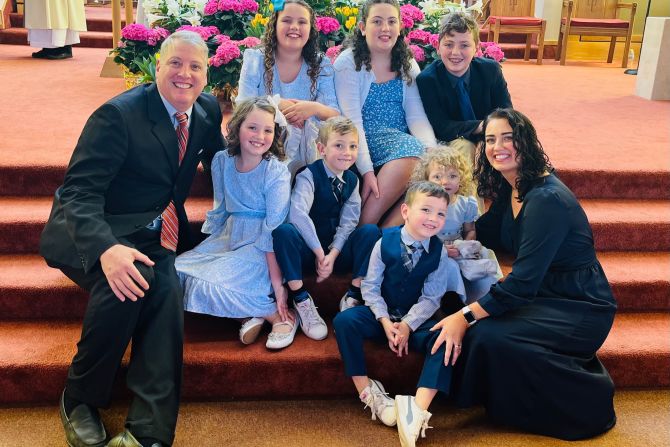 Mark and Ryan-Marie Houck with their seven children, ages 2 to 13. | Courtesy of the Houck family

The arrest of a Catholic apostolate leader and father of seven in an FBI raid last week has sparked a groundswell of support for him and his family as new information has raised serious questions about how he was taken into custody.

Mark Houck, the founder and co-president of The King’s Men, a men’s ministry, faces federal assault charges stemming from an altercation with a Planned Parenthood escort outside a Philadelphia abortion clinic nearly a year ago.

Houck, who regularly prays the rosary outside the clinic, maintains he was defending his 12-year-old son from the escort’s verbal harassment, a family spokesman, Brian Middleton, told CNA on Sunday. The man fell when Houck pushed him away, Middleton said.

The altercation was captured on a video the Houcks are in the process of locating, Middleton added. As of Sunday the family had not yet hired a lawyer but they expect to do so on Monday, he said.

Just days later, Houck received a “target letter” from the U.S. Attorney’s Office informing him that he was the focus of a federal criminal probe into the same incident, Middleton said.

Through his attorney at the time, Houck tried to contact the U.S. Attorney’s Office to discuss the case but never received a response, Middleton said.

“The next time they heard anything was Friday morning,” he said.

That day, Sept. 23, federal law enforcement officials arrived outside the Houcks’ home in Kintnersville in Bucks County, Pennsylvania, around 7 a.m.

“A SWAT team of about 25 came to my house with about 15 vehicles and started pounding on our door,” Houck’s wife, Ryan-Marie Houck, told CNA on Friday, just hours after her husband’s arrest.

“They were pointing their weapons,” Middleton said. “They came in as if they were expecting some kind of confrontation.”

11 years in prison if convicted

The FBI told CNA that Houck was arrested outside his residence Friday morning “without incident.” In a press release, the U.S. Attorney’s Office for the Eastern District of Pennsylvania said that Houck is being charged with a violation of the Freedom of Access to Clinic Entrances Act, more commonly referred to as the FACE Act.

The federal indictment says that Houck twice assaulted a 72-year-old man who was a patient escort at a Planned Parenthood clinic at 1144 Locust St. in Philadelphia on Oct. 13, 2021. Houck first shoved the escort, identified by the initials B.L., to the ground as B.L was attempting to escort two patients, the indictment says. Houck also “verbally confronted” and “forcefully shoved” B.L. to the ground in front of the clinic on the same day, the indictment says.

The indictment says that B.L. was injured and needed medical attention. Middleton, the Houck family spokesman, maintains the injury was minor, only requiring “a Band-Aid on his finger.”

If convicted, Houck could face up to 11 years in prison, three years of supervised release, and a fine of up to $350,000, according to the U.S. Attorney’s Office.

The FACE Act “prohibits violent, threatening, damaging, and obstructive conduct intended to injure, intimidate, or interfere with the right to seek, obtain or provide reproductive health services,” according to the Department of Justice (DOJ).

Middleton said Houck and his family are well-known in the Philadelphia area.

“The Houcks are incredible people. Mark’s whole life is a ministry,” he said. “This is really the family next door.”

Middleton speculated that many of those contributing to the fund believe the FBI used “unnecessary force” in arresting Houck.

He said the raid may fuel further criticism that the Biden administration’s Justice Department has a double standard where abortion politics are concerned, noting the contrast between the aggressive tactics used against Houck and the lack of any arrests by the FBI in connection with dozens of incidents of vandalism against pro-life pregnancy centers across the country in recent months. If convicted, he could face up to 11 years in prison. Five Catholic priests, a religious sister, and three lay people were kidnapped in an attack on a Catholic church in Cameroon nine days ago. An 84-year-old pro-life volunteer was shot on Sept. 20 while going door-to-door in her community to talk about a ballot measure concerning abortion in Michigan.