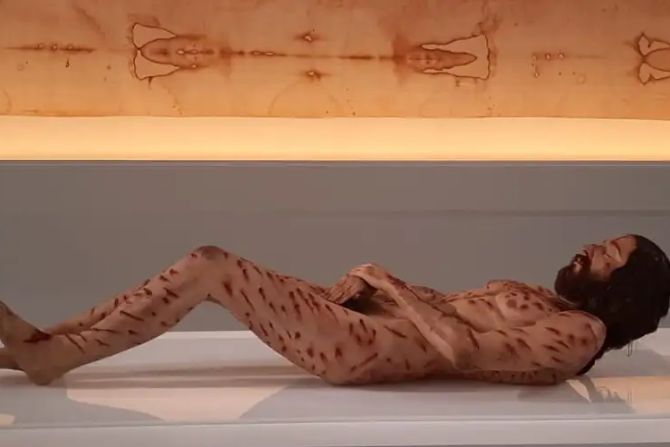 Starting today, Salamanca Cathedral is hosting the exhibition of the first hyper-realistic recreation of the body of Christ based on data obtained from the Shroud of Turin.

The sculpture, made of latex and silicone, weighs about 165 pounds.

The posture is of the deceased Christ in rigor mortis. The legs are somewhat bent, hands crossed at the level of the pubis. There is no false modesty in the figure. The entire body of the man on the Shroud is visible, nothing omitted, including circumcision.

The hair that has been used is human and can be seen all over the body, from the feet to the head with all realism, without leaving out a detail.

When one approaches the figure — with hands behind one’s back in accordance with exhibit rules for visitors — one can observe every pore of the skin, freckles, eyelashes, and eyebrows.

The back is slightly raised, making apparent the lacerations on the head caused by the crown of thorns, and there is a kind of small braid that ties the hair on the back of the head. Also seen are the bruises on the shoulders due to carrying the weight of the cross.

On the skin you can see each of the tearing wounds produced by the scourging and the traces of the nails in the hands and feet, as well as the one between the fifth and sixth ribs on the right side. The nose is broken and the right eye bruised.

Bishop Jose Luis Retana Gozalo of Salamanca said that this hyper-realistic representation does not imply a “theological conflict,” because the Mystery has become flesh. On the contrary, “it will be an aid to see the Mystery, a call towards the Mystery.”

In addition to the figure representing the crucified Christ, there is a preliminary exhibit that puts the viewer in context about the reality of the scourging and crucifixion and the research into the Holy Shroud.

🎥VIDEO | The beautiful Cathedral of Salamanca, Spain, is hosting an exhibition of the hyperrealistic and volumetric artwork entitled "The Mystery Man", which is the result of an assiduous study of the Shroud of Turin. The effort took more than 15 years 👉🏻 https://t.co/qcOg53fWFe pic.twitter.com/pQcr3gKgcG

The hyper-realistic sculpture tries to present before the viewer a “body of human quality without artistic movement,” without interpretation, made from multidisciplinary scientific data based on studies on the Holy Shroud.

The curator of the exhibition, Álvaro Blanco, who dedicated more than 15 years of research into its realization, gives a lengthy prior explanation of the historical and scientific data that culminates in the hyper-realistic body.

Blanco confessed during the presentation of the exhibition in the sacristy of the Cathedral of Salamanca that at the moment of seeing the finished body he was convinced that “he was before Jesus, he was before the image of the body of Jesus of Nazareth.”

A group of artists created the sculpture under Blanco’s direction.

“The Mystery Man,” presented by ArtiSplendore, a company specializing in cultural and artistic patrimony exhibitions and tourism, is scheduled to remain in Salamanca between four and six months.

“In the next 20 years we want to go to churches around the world,” said the company’s executive director.