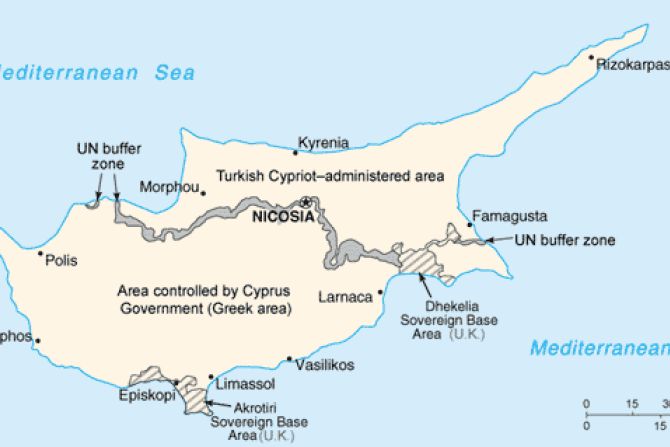 With the death of Archbishop Chrysostomos II on Monday, the Orthodox Church of Cyprus is facing an uncertain future, as is the community living with what is often called ”the last wall of Europe”: the border that splits the island between the breakaway Turkish Cypriot in the north and the internationally recognized south.

Chrysostomos II died Nov. 7 at age 81 after years of battling cancer. He had been archbishop of New Justinian and All Cyprus since 2006, and in this position, he strongly developed ecumenical relations. He was the first archbishop of Cyprus to meet a pope in a “bilateral” meeting in 2007. During his time as archbishop of Cyprus, he welcomed two popes to the island: Benedict XVI in 2010 and Pope Francis in 2021. These papal visits were the culmination of an extraordinary pastoral and ecumenical effort.

Born as Herodotus Demetriou on April 10, 1941, in Tala, on the island of Paphos, he went to live in the Avios Neophytos monastery when he was 12 after his father was killed in an accident in the construction of the monastery.

He remained in the monastery, being ordained a deacon, until he was 28. He completed his studies at the University of Athens and graduated in 1972.

Returning to the monastery, he was appointed abbot, and only six years later, he became bishop of Paphos, a position he held until 2006, when he became archbishop of Cyprus. As bishop, he earned a reputation as a managerial leader, with clear political overtones in his Christmas and Easter messages.

This public image was also the result of the island’s real circumstances: by the conditions created by the Turkish occupation of part of the island, by the need to be listened to, and to give a signal to the people. While he was relatively straightforward and kind in private, he also was called a “tough but fair” boss.

His election as archbishop of Cyprus confirmed his abilities. Traditionally, the election takes place by a combination of lay people and a college of clerics. There were three candidates to succeed Chrysostomos I. His rivals were Bishop Athanasios of Limassol and Bishop Nikiforos of Kykkos.

In the first round of voting, Demetriou only received 10% of the votes. However, one of the candidates decided to leave (some say Demetriou convinced him to go) and support him in the election. Thus Demetriou became the archbishop of Cyprus.

Chrysostomos II and the question of Turkish occupation

In 1974, Turkey invaded the northern part of Cyprus in response to the coup that had deposed the president of Cyprus, who was at the time the Greek Orthodox Archbishop Makarios III. The goal of the coup was the reunification of the Cypriot territory with the Greek motherland, and the Turks wanted to intervene to defend their linguistic minority. What is known as the Turkish invasion of Cyprus is instead called Operation for Peace in Cyprus or Operation Cyprus in Turkey.

Since 1974 there has been a Turkish Republic of Northern Cyprus, recognized only by Turkey. This makes Cyprus the last country with this kind of “wall” in Europe — though in most parts, it is more a buffer zone than an actual wall.

The Turkish occupation has been labeled as harsh, and Cyprus has repeatedly denounced the loss of Christian heritage in the island’s northern part.

Chrysostomos II always had an adamant position on this. However, in a 2018 interview, he said that he would never believe that a peace agreement to reunify the ethnically divided island was possible because Turkey wanted to establish a Turkish state in the nation.

When Pope Benedict XVI visited the island in 2010, Chrysostomos II took the floor and accused Turkey of trying to carry out “dark plans, which include annexing the land now under military occupation and then conquering the whole of Cyprus.”

Beyond political positions, Chrysostomos II argued for the need for closer relations between the Orthodox Church and the Catholic Church.

In 2022, in one of the last interviews with Cypriot state TV, he said: “I want to do a real job, not a demonstration. I arrived and will leave someday, so I want to leave something behind me for this nation. That’s what matters.”

His ecumenical initiatives were many. Acting as president of the Holy Synod of the Church of Cyprus, he participated in the funeral of Pope John Paul II and the inauguration of Pope Benedict XVI’s pontificate in 2005 in the Vatican.

As a response to the fraternal gesture, Benedict XVI sent his delegation to the ceremony of his enthronement.

The climate of mutual brotherhood between the Catholic Church and the Orthodox Church of Cyprus was then strengthened with the journey of Pope Francis to the island in December 2021.

Reform of the Cypriot Orthodox Church

Chrysostomos II was also a reformer. He promoted the change of the Cypriot Orthodox Church Charter, which has been in force since 1914 and has been revised twice. First, the charter significantly changed the electoral system, giving greater power to the faithful. In addition, the boundaries of the metropolises were altered, a synodal tribunal of five members was created, and the procedures for ecclesiastical divorce were changed.

He also promoted the expansion of the Holy Synod with the reconstitution after 800 years of old episcopies were abolished during the Frankish domination of the Latins in 1222. In this way, the autocephaly of Cyprus had a full synod — that is, with at least 13 members, which means that a Great and Supreme Synod could now be convened without asking for the participation of bishops from other Churches.

On the practical side, Chrysostomos introduced a unified payroll system for the clergy and established the Theological School of the Church of Cyprus. The latter was the dream of Patriarch Makarios III, who could not implement it following the Turkish invasion of 1974.

His death leaves a great void in the Cypriot Church and Cypriot society. Who will be able to carry on his legacy?