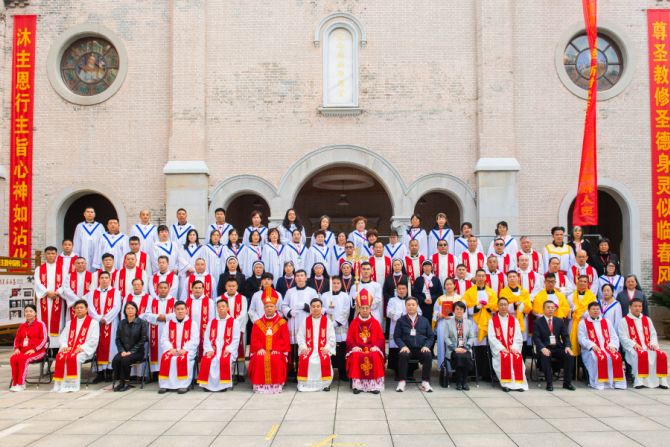 The agreement between China and the Holy See on the appointment of bishops is not at risk — for now. The Holy See’s declaration following the installation of Bishop John Peng Weizhao as auxiliary bishop of Jiangxi is a precise signal.

For the Holy See, this is not only about the diplomatic agreement. It is about a spirit of dialogue and mutual trust between the Vatican and the Chinese authorities, which Rome feels should not be betrayed.

This spirit was betrayed by the installation of Bishop Peng as bishop of Jiangxi according to the subdivision of the dioceses of the Chinese government and following what the Holy See defines as “long and heavy pressure” from local authorities.

The contents of the agreement are not known. Keeping it confidential comes precisely from the need, recognized by the Holy See, to fine-tune it.

It is not the first time the Holy See has made agreements with governments. A similar thing happened in 1956 with communist Hungary, for example.

This is the thesis put forward by those who support the Sino-Vatican agreement. The Dicastery for the Evangelization of Peoples’s agency Fides published on Nov. 23 an interview with Bishop Juan Arrieta, secretary of the Dicastery for Legislative Texts, supporting precisely this theory.

In any case, the agreement has been described as provisional and, therefore, to be improved. Cardinal Pietro Parolin, Vatican secretary of state, explained this in an interview with CNA earlier this year.

Furthermore, the Holy See had also made it clear that it was a “pastoral” agreement. In other words, the deal only concerned the appointment of bishops and not a possible resumption of diplomatic relations, a different subject to be discussed.

Some signs of relaxation

Before the renewal of the agreement, there had been signs of détente. For example, the latest negotiations between the Holy See and China took place in Tianjin from Aug. 28 to Sept. 2.

The place was symbolically important, considering it has been one of the vacant dioceses in China since 2005 without a recognized bishop. The Vatican delegation also visited the underground bishop Melchior Shi Hongzhen, 92.

In a world of symbols, with the visit the Holy See wanted to show that despite the desire to carry on a dialogue, the situation of Catholics in China had not been forgotten.

At the end of the 10th National Assembly of Chinese Catholic representatives, Archbishop Giuseppe Li Shan of Beijing was elected president of the Patriotic Association.

The association, founded in 1957, is the governmental body to which priests must be members to show goodwill and patriotism.

Even the appointment of Li Shan seemed a sign of a thaw. Li Shan was consecrated bishop in 2007 with the consent of the Holy See, according to a procedure in force before the Sino-Vatican agreement of 2018, which marked, in fact, a détente of relations outlined in the letter of Pope Benedict XVI to the Catholics of China.

With Li Shan, however, Bishop Shen Bin of Haimen was appointed to lead the Chinese Council of Bishops, the body not recognized by the Holy See that supports the Patriotic Association under the control of the Communist Party.

In his report on the Church in China, Shen presented the appointments of bishops in the last six years as a completely autonomous process led by the Patriotic Association.

Reading Bishop Shen’s report, we learn that there are 98 dioceses in China, which can count on 4,202 churches and another 2,238 “active sites.”

The bishop of Haimen spoke of the presence of 66 bishops, thus confirming that at least a third of the dioceses are uncovered, and added that in the last six years, 289 new priests had been ordained and 161 new nuns have completed their religious profession. In addition, there have been nearly 110,000 new baptisms.

The position of the Holy See

The reason is simple: neither the bishops nor the administrative division of the dioceses can be delegated to the state. They are internal questions of the Church. They are not concerned with the place’s geography — nor give new administrative boundaries of a political nature.

In the Catholic Church, the pope chooses the bishops, and the Holy See decides how to distribute the bishops. All this, of course, while respecting the state’s autonomy, too, keeping a clear separation between the two powers.

For China’s communist rulers, this is simply unacceptable. The state controls everything, even the organization and teaching of the Church.

A good example of this is the oath that Bishop Peng had to take at the installation as auxiliary bishop of Jiangxi, as reported by the site Chinacatholic.cn:

“I swear to keep the commandments of God, fulfill the pastoral duties of the auxiliary bishop, preach the Gospel faithfully, guide the priests and faithful of the Diocese of Jiangxi, abide by the national constitution, safeguard homeland unity and social harmony, love the country and religion, and persist in the principle of independent and self-managed churches, adhere to the leadership of the Catholicism of my country in China, actively guide Catholicism to adapt to socialist society and contribute to the realization of the Chinese dream of the great rejuvenation of the Chinese nation.”

The story of Bishop Peng

John Peng Weizhao, 56, was ordained a priest in 1989. He was secretly ordained the bishop of Yujiang as an underground bishop on April 10, 2014. Peng was called to succeed Bishop Thomas Zeng Jingmu, who had spent 23 years in prison and died in 2016. Bishop Peng was arrested a few days after his ordination as bishop and was only released several months later, in November 2014.

Erected in 1885, the Diocese of Yujiang is located in the province of Jiangxi and is a suffragan, together with four other dioceses, of the Archdiocese of Nanchang. The Chinese government wants the five ecclesiastical provinces to be merged under the single Diocese of Shaanxi.

Thus, Peng left his post as bishop of Yujiang to “regularize himself,” agreeing to become the auxiliary bishop of Li Suguang, who has been the official, state-accredited bishop of Nanchang since 2010 — for what is called the Diocese of Jiangxi.

However, the Vatican communiqué explained that the Holy See does not recognize this diocese.

Why the Chinese move?

The reason for the move by the Chinese is unclear and somewhat surprising, given there had been several signs of détente before the agreement was renewed.

At the latest Communist Party congress, President Xi Jinping strengthened the program of “Sinicization” of religions and increased pressure on Catholics to join the Patriotic Association.

But some sources say that authorities may be reacting to the fact that the Holy See rejected a candidate for the episcopate proposed by Beijing. This detail is not officially confirmed, but it could have particular weight.

More than a year has passed since the most recent appointment of a bishop in China — Archbishop Cui Qingqi, ordained in Wuhan-Hankou on Sept. 8, 2021.

Since the agreement entered into force, only six bishops have been appointed, and for two of them, the nomination procedure was already in an advanced state before the signing of the agreement.

In short, despite the deal, there are many vacant dioceses — a sign of many challenges despite the alleged goodwill.

One of these challenges is the Communist Party’s constant pressure on priests to “register” with the Patriotic Association since 2018. On this question, Cardinal Fernando Filoni, then prefect of Propaganda Fide, gave an interview published in the Vatican’s official newspaper on Feb. 4, 2019.

Beijing has continued its attempt at forced assimilation of Catholics and the Church in China to Chinese Communist Party doctrine. Beijing has also attempted to force the Vatican to recognize its subdivision of dioceses. This move was — presumably — not part of the agreement, although it impacted the appointment of bishops.

The public response of the Holy See clearly said the Diocese of Jiangxi “is not recognized by the Holy See” and that what happened “did not take place in accordance with the spirit of dialogue existing between the Vatican and the Chinese parties and what was stipulated in the Provisional Agreement on the appointment of bishops, on Sept. 22, 2018.”

“We are talking about the spirit of the agreement, not about the deal itself. But it is a spirit that speaks of mutual trust and dialogue, which for the Holy See was broken by Beijing with its unilateral decision.”

In the end, the Holy See wanted to reaffirm its position. As explained by a Vatican source involved in the China dossier, who asked for anonymity, “in every dialogue, we highlight the question of religious freedom, and we address, in the ways we can, the question of bishops who are prevented from carrying out their ministry.”

From this view, the Holy See does not take a public position on human rights such as religious freedom, precisely in the “spirit of dialogue” with the Communist Party that it does not want to undermine.

With the declaration, the Holy See issued a warning that Beijing has broken the trust climate, which must be restored. But, at the same time, it did not close the way to dialogue.

The Nov. 26 statement reads that “the Holy See hopes that similar episodes will not be repeated, awaits appropriate communications on the matter from the authorities, and reaffirms its full willingness to continue the respectful dialogue concerning all matters of common interest.”

For now, the Holy See’s doors remain open. The question is: until when?