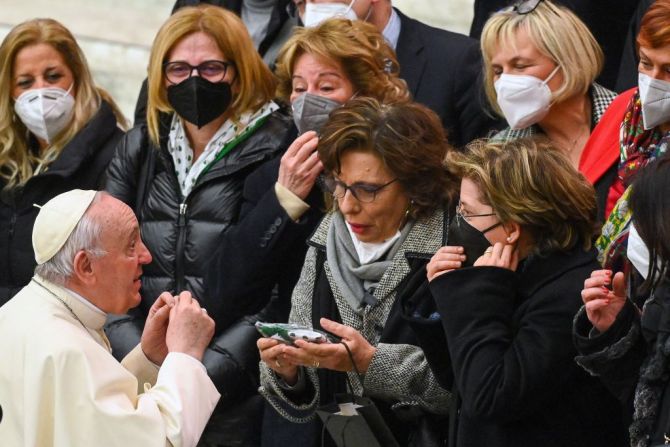 Pope Francis meets a group of women at the end of his weekly general audience at the Paul VI hall in the Vatican on March 2, 2022. | Photo by VINCENZO PINTO/AFP via Getty Images

In an interview published in America Magazine today, Pope Francis unequivocally stated that women cannot be ordained as priests but emphasized the important role they have to play in the life of the Church.

“Many women feel pain because they cannot be ordained priests. What would you say to a woman who is already serving in the life of the Church but who still feels called to be a priest?” asked Kerry Webber, executive editor of the monthly magazine published by the Jesuits of the United States.

The Holy Father was unequivocal on the question of the ordination of women priests:

“And why can a woman not enter ordained ministry? It is because the Petrine principle has no place for that,” the pope said.

“The ministerial dimension, we can say, is that of the Petrine church. I am using a category of theologians. The Petrine principle is that of ministry,” the Holy Father said.

A theology of the ‘Marian principle’

The pope explained that there is another “theological” way in which women play a vital role in Church life.

The dignity of women, he said, reflected the spousal nature of the Church, which he called the “Marian principle.”

“The way is not only [ordained] ministry. The Church is woman. The Church is a spouse. We have not developed a theology of women that reflects this,” Pope Francis said.

“The Petrine principle is that of ministry. But there is another principle that is still more important, about which we do not speak, that is the Marian principle, which is the principle of femininity (femineidad) in the Church, of the woman in the Church, where the Church sees a mirror of herself because she is a woman and a spouse.

“A church with only the Petrine principle would be a church that one would think is reduced to its ministerial dimension, nothing else. But the Church is more than a ministry. It is the whole people of God. The Church is woman. The Church is a spouse. Therefore, the dignity of women is mirrored in this way,” the pope said.

Pope Francis noted that a theology of the Marian principle needs to be developed further.

“This is an abbreviated explanation, but I wanted to highlight the two theological principles: the Petrine principle and the Marian principle that make up the Church. Therefore, that the woman does not enter into the ministerial life is not a deprivation. No. Your place is that which is much more important and which we have yet to develop, the catechesis about women in the way of the Marian principle,” he said.

A third way: the administrative way

Pope Francis said that in addition to the Petrine and the Marian principles, there is another function of the Body of Christ that is particularly suited to women: the “administrative way.”

The Holy Father then pointed to the women he has appointed, noting that women generally do a “better” job managing things.

“Here in the Vatican, the places where we have put women are functioning better. For example, in the Council for the Economy, where there are six cardinals and six laypersons. Two years ago, I appointed five women among the six laypersons, and that was a revolution. The deputy governor of the Vatican is a woman. When a woman enters politics or manages things, generally she does better. Many economists are women, and they are renewing the economy in a constructive way,” he said.

He then shared two anecdotes about what he called the “nose” (olfato) of women, who have shown themselves to be keen judges of character in evaluating candidates for the priesthood.

“The woman is a mother and sees the mystery of the Church more clearly than we men. For this reason, the advice of a woman is very important, and the decision of a woman is better,” he said.

Ordination of women and the Synod on Synodality

Ahead of next year’s Synod on Synodality, participants in the German Catholic Church’s Synodal Way voted to approve text calling for the ordination of women priests. The document, titled “Women in Ministries and Offices in the Church,” said: “It is not the participation of women in all Church ministries and offices that requires justification, but the exclusion of women from sacramental office.”

Pope Francis has on several occasions made public his concerns about the German Synodal Way, and his clear enunciation of the Church’s position on the ordination of women follows his Nov. 17 ad limina meeting with German bishops over their controversial synodal process.

Following that meeting, the German Bishops’ Conference president, Bishop Georg Bätzing, told journalists that there was no departure from Catholicism intended. Instead, he said, supporters of the Synodal Way wanted to remain Catholic, “but we want to be Catholic in a different way.”

In a statement released Thursday, the Vatican published concerns raised by two leading cardinals who met with the German bishops.

The main concern is one of union with the Church, explained Cardinal Marc Ouellet, prefect of the Dicastery of Bishops.

“Several authoritative critics of the current orientation of the Synodal Way in Germany speak openly of a latent schism that the proposal of your texts threatens to entrench in its present form,” he wrote.

The Synodal Way — which is not a synod — risked being not about achieving pastoral innovations but attempting a “transformation of the Church,” Ouellet warned in his statement, published in German by CNA Deutsch.

Ouellet said the Synodal Way’s suggestions “hurt the communion of the Church,” sowing “doubt and confusion among the people of God.”

Cardinal Luis Ladaria Ferrer, prefect of the Congregation for the Doctrine of the Faith, raised five concerns with the German bishops, including the Synodal Way’s approach to sexuality, power and structure in the Church, and the ordination of women to the priesthood. Pope Francis on Wednesday named three women to the Dicastery of Bishops, the Vatican office responsible for evaluating new members of the Catholic Church’s hierarchy.