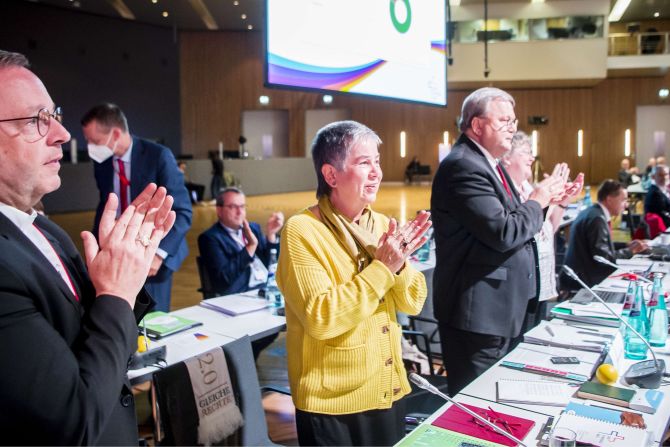 With votes supporting changes to the Church’s teaching on issues including homosexuality and the ordination of women, the German Synodal Way concluded its assembly in Frankfurt on Saturday under a cloud.

Auxiliary Bishop Florian Wörner of Augsburg told CNA Deutsch he wondered “whether we mean the same thing when we talk about synodality. I continue to perceive an alarming gap between what Pope Francis says about it and what we experienced in Frankfurt. Too often, instead of factual arguments, emotions came into play to create moods and achieve certain goals.”

Wörner warned: “Before taking decisions with far-reaching consequences for the life of the Church in Germany, we should work out how synodality truly works.”

After bishops blocked a pro-LGBT document in a secret ballot on the first day, some disappointed participants protested loudly. Organizers sharply criticized the outcome and implemented changes, including an end to secret ballots. Bishops raising concerns were decried as “whiny” by Irme Stetter-Karp, one of the presidents of the process.

One day later, only eight bishops voted against a document calling for a “re-evaluation of homosexuality.” Another eight bishops abstained from voting, while 40 of the 56 bishops present — more than 83% — supported the document.

More than a vote for ordaining women

On Friday, the Synodal Way adopted a text on the role of women in the Church. The document calls for “fundamental equality of all believers.” It adds this “means placing the question of women’s access to sacramental ministry in the context of the fundamental renewal of the theology of ministry.”

The 32-page-text makes a case for introducing female deacons and proposes bringing to the Vatican the fundamental question of ordaining women.

When it came to the vote, the result was a clear majority: Some 92% of participants of the Synodal Way voted to adopt the text, reported CNA Deutsch. Among the bishops, almost 82% (45 bishops) were in favor of the text, while about 18% voted “no” (10 bishops). Five of the 60 bishops present abstained.

With this being a matter determined for the Catholic Church, Bishop Franz-Josef Bode acknowledged “that would be a very high-level decision and a binding one; but even the highest decisions of [Ecumenical] Councils are historical decisions of the Church.”

The German bishop told journalists that council decisions, too, “are always made at a point in time in history and there, too, tradition remains alive and we will still have to give the work of the Holy Spirit the space for something to develop. But that’s a question that then, I think, can be addressed by the development of dogma — there is that, there is also dogma history, that’s what people talk about in theology — I would be happy first of all if it were addressed at all in such a broad way. And then we’ll see.”

Gender, ‘non-heterosexual priests,’ and other votes

On Saturday afternoon, three further documents were approved at their first reading: one making a case for normalizing the “situation of non-heterosexual priests,” one about “dealing with gender diversity,” and one dealing with the “proclamation of the Gospel by women in word and sacrament.”

All texts will be considered in second reading at the next (and so far final) synodal assembly in spring of 2023 and could then be officially adopted.

Whether any of the votes of the German process, which is not a synod, will be adopted as Catholic practice, though, is an entirely different question. From its outset, the Synodal Way — also known as the Synodal Path — has come under intense scrutiny and criticism.

This has not dissuaded organizers from moving toward creating a permanent process: On Saturday, participants voted to create a Synodal Council that would permanently oversee the Church in Germany.

At the Frankfurt meeting on Sept. 10, the suggestion won almost 93% of all votes. Only five bishops rejected the document, CNA Deutsch reported.

Having passed its second reading, the call for a Synodal Council is now considered an official resolution of the Synodal Way.