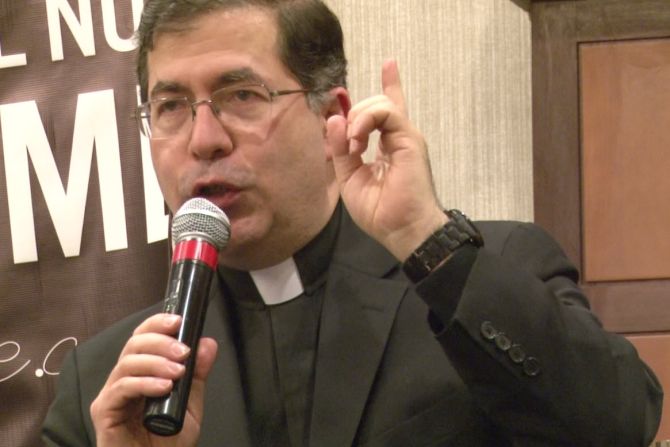 Father Frank Pavone, a well-known pro-life activist and national director of the organization Priests for Life, has been dismissed from the clerical state for “blasphemous communications on social media” and “persistent disobedience of the lawful instructions of his diocesan bishop,” CNA has learned.

In a Dec. 13 letter to U.S. bishops obtained by CNA and confirmed by multiple sources as authentic, Archbishop Christophe Pierre, the apostolic nuncio to the United States, wrote that the prefect of the Dicastery for the Clergy issued the decision on Nov. 9, adding that there was “no possibility of appeal.”

“Father Pavone was given ample opportunity to defend himself in the canonical proceedings, and he was also given multiple opportunities to submit himself to the authority of his diocesan bishop,” explains a separate statement attached to Pierre’s letter. “It was determined that Father Pavone had no reasonable justification for his actions.”

Pavone, however, told CNA Saturday that he had not been notified about the Vatican’s judgment.

The communication from Pierre does not specify the actions that led to Pavone’s dismissal or name the bishop he disobeyed.

The statement refers to Pavone as “Mr. Pavone” and calls him “a lay person,” underscoring the dramatic and immediate nature of the Vatican’s action.

“Since Priests for Life, Inc. is not a Catholic organization, Mr. Pavone’s continuing role in it as a lay person would be entirely up to the leadership of that organization,” the statement says.

Pavone is still saying Masses, including one streamed online Saturday. The Priests for Life website states that Pavone “is a Catholic priest in good standing, and exercises his ministry in full communion with the Catholic Church.”

In an email to CNA on Saturday, Pavone said that he was not aware of the Vatican’s action.

“How did CNA learn about this before I did?” he asked. In a subsequent email he added that CNA’s inquiry was “the very first communication that came to me about this.”

It is not clear in what diocese Pavone, 63, is incardinated as a priest. On the Priests for Life website, it says he received permission from the Vatican in 2019 to transfer from the Diocese of Amarillo, Texas, where he was incardinated in 2005, to another, unnamed diocese.

Pavone hosted the show “Defending Life” on EWTN for many years until the bishop of Amarillo, Texas, revoked Pavone’s permission to appear on the Network. EWTN is the parent organization of CNA.

A history of clashes with hierarchy

Originally based in Staten Island, New York, Priests for Life is now headquartered in Titusville, Florida, within the Diocese of Orlando. That diocese, also, did not respond to CNA’s request for comment Saturday.

Pavone has served as the pro-life organization’s national director since 1993.

In that role he has a long history of conflicts with bishops, beginning more than 20 years ago with the late Cardinal Edward Egan of the Archdiocese of New York. Egan succeeded the late Cardinal John J. O’Connor, who ordained Pavone in 1988 and encouraged his pro-life work.

In his email, Pavone directed CNA to a document posted on his personal website titled “Summary of How Fr. Frank and Priests for Life Have Been Treated by Some in the Hierarchy.”

“We all expect that the pro-abortion groups, like Planned Parenthood, will target, harass and try to intimidate us. And they do try,” he wrote.

“But when such treatment comes from bishops and other Church authorities — which it increasingly does — it’s particularly deplorable,” he added. “Instead of supporting and encouraging the pro-life work of the Church, some of these men try to obstruct and hinder it, and abuse their authority to try to intimidate priests and laity who make ending abortion the top priority of our lives.”

Pavone has been at odds with Bishop Patrick J. Zurek in Amarillo since the latter became bishop there in 2008. In 2011, Zurek publicly suspended Pavone, though Pavone later had the suspension overruled by the Vatican. The Amarillo Diocese did not respond to CNA’s requests for comment prior to publication.

Pavone’s political activism played a role in his problems in Amarillo.

An outspoken supporter of former president Donald Trump, Pavone served on official Trump campaign outreach positions in 2016 and was originally a co-chair of Trump’s 2020 pro-life coalition, as well as an advisory board member of Catholics for Trump. Canon law forbids clerics from having an active role in political parties unless they receive the permission of their bishop.

In November 2016, Pavone filmed a video at the Priests for Life headquarters, urging support for Trump. The video was staged with the body of an aborted baby laid before Pavone on what appeared to be an altar.

Zurek said soon after the video’s release that he would open an investigation into the incident, calling it “against the dignity of human life” and “a desecration of the altar,” adding that “the action and presentation of Father Pavone in this video is not consistent with the beliefs of the Catholic Church.”

On his website, Pavone details his version of what happened in the video. He also has posted a transcript of what he said on the video.

“Much of the criticism revolved around my having placed the baby on an ‘altar’ and some started getting into technical complaints about what should or should not be done with an altar. But to the extent that they want to get technical, so can I, and I pointed out that this was a table in our office, not a consecrated altar in a chapel,” he wrote.

“That table, sometimes used for Mass, was also the place where all my videos in this educational series of election broadcasts were made,” he continued. “In retrospect, I should have made the baby video in a different location so as to avoid any confusion to begin with.”

Pavone wrote in his account that the baby’s remains were given to him so he conduct a proper burial, which he said he did after making the video.

Pavone stepped down from the two positions with Trump’s reelection campaign in 2020 at the request of what he called “the competent ecclesiastical authority.” But he continued to use his social media platforms to advocate for Trump and denounce the Democratic Party.

Those posts led to another confrontation with Zurek shortly before the 2020 election.

In tweets that were subsequently deleted, Pavone reportedly called then Democratic presidential nominee Joe Biden a “[expletive] loser” and said the Democratic Party was “God-hating” and “America-hating” and that Biden’s supporters “can’t say a [expletive] thing in support of their loser candidate without using the word Trump.”

“What the hell do you have to say for yourselves, losers?” Pavone asked.

Pavone also reportedly tweeted that he would hear the confession of a Catholic who votes Democrat, “but we are trained that in the absence of repentance, absolution has to be withheld.”

In response, the Amarillo Diocese issued a statement disavowing Pavone’s comments, saying he used “scandalous words not becoming of a Catholic priest.”

“These postings are not consistent with Catholic Church teachings,” the diocese said in its statement. “Please disregard them and pray for Father Pavone.”

The Diocese of Amarillo has spoken out about election-related comments from Fr. Frank Pavone, the national director of the pro-life group Priests for Life, and asked prayers for the priest.

Priests for Life national director Fr. Frank Pavone has resigned from advisory positions in the reelection campaign of President Donald Trump. The priest resigned at the direction of Church authorities, he told CNA Friday.