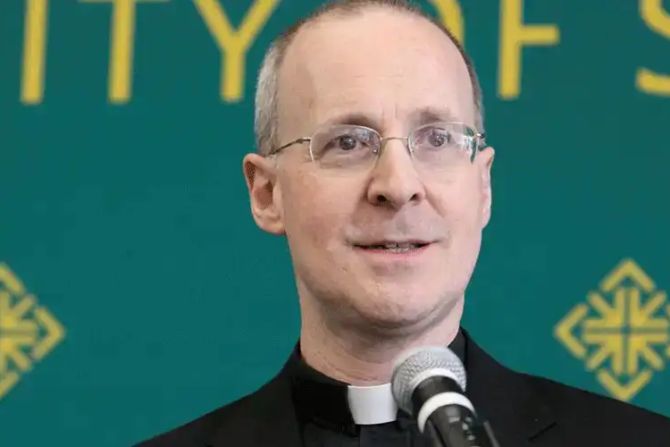 Father Francisco José Delgado, a priest of the Archdiocese of Toledo in Spain and host of “The Sacristy of the Vendée” program on YouTube, criticized Jesuit Father James Martin for a controversial post on Twitter about the gay “marriage” of U.S. Secretary of Transportation Pete Buttigieg.

The controversy began with the accusation that Buttigieg’s travel expenses as secretary were excessive. The official responded that he “traveled with his ‘husband’ as other senior officials travel with their wives,” Delgado explained.

Martin tweeted “Pete Buttigieg is married,” commenting on a tweet from the Catholic League, which read that “it is true that Peter Buttigieg is legally married, but that is a legal fiction.”

On Jan. 22, Martin posted: “Surprised this got so much attention. Like it or not, Pete Buttigieg is legally married.”

“You may disagree with same-sex marriage (or not). But @SecretaryPete is married in the eyes of the state, and his church, as much as anyone else is. To claim otherwise is to ignore reality,” wrote the Jesuit priest, who is also a consultant to the Vatican’s Dicastery for Communications.

Responding to the evolving controversy, Delgado tweeted in response to Martin’s post. “You can go to his ‘church’ and stop sullying that of Christ, prophet of Satan,” he wrote.

Martin’s tweet sparked a wave of other criticism on social media. Cardinal Wilfrid Napier, archbishop emeritus of Durban, South Africa, pointed out that just because the state sanctions something doesn’t make it right:

“He’s not married in the eyes of God. To claim otherwise is to ignore reality,” tweeted Sean K. Davis in response to Martin’s assertion regarding Buttigieg’s relationship.

Adele Scalia, daughter-in-law of the late Supreme Court Justice Antonin Scalia, countered: “You are, in fact, not surprised this got so much attention. You tweeted it for the attention you knew it would get.”

Delgado said in a statement to ACI Prensa, CNA’s Spanish-language sister news agency, that “Father James Martin, an American Jesuit, has the habit of speaking out on social media in a scandalous way against the Catholic faith.”

“His favorite theme is the acceptance of everything that has to do with homosexuality, not only the tendency or the acts, but even the recognition of homosexual unions as true marriages,” the Spanish priest remarked.

Martin’s first comment in support of Buttigieg, the Spanish priest said, was that “‘Pete Buttigieg is married.’ Faced with such an outrageous statement, many Catholics have reminded him that it is against Church teaching, and have even asked him if he would be consistent and confer the sacrament of marriage (although Buttigieg is not Catholic, but is currently an Episcopalian),” Delgado continued.

The Spanish priest noted: “James Martin has insisted that the politician ‘is married in the eyes of the state and his church, as much as anyone else is.’ This, said by any Catholic, would be excusable if it is due to ignorance and, simply, it would be necessary to proceed to explain to that person what the doctrine of the Church is.”

However, the Spanish priest pointed out, “Martin is not only a Jesuit priest but also holds a position at the service of the Holy See as a consultant to the Dicastery for Communications. Therefore, with regard to him there is not only room for a correction that, on the other hand, many other Catholics have already tried to make to him.”

In reality, “what we Catholics and especially priests feel is terrible indignation at the attitude of this priest openly contrary to the teaching that he should defend and communicate.”

“By doing so, he causes serious damage to the Church and to the simpler faithful who, considering his priestly status, think that what he says corresponds to the official position of the Church,” the priest lamented.

Delgado then recalled what the Catholic Church teaches, specifically what is established in the document “Considerations regarding proposals to give legal recognition of unions between homosexual persons” issued by the Congregation for the Doctrine of the Faith.

“In those situations where homosexual unions have been legally recognized or have been given the legal status and rights belonging to marriage, clear and emphatic opposition is a duty,” the Vatican document states in Section 5.

In conclusion, the Spanish priest invited “the priest James Martin, if he is not willing to stop sullying the face of Mother Church with his poisoned doctrine, to leave as soon as possible, since it doesn’t seem that those who have authority over him want to do anything about it.” Pope Francis received Jesuit Father James Martin in a private audience in the apostolic palace inside the Vatican on Friday. Father James Martin, SJ, said he was sorry Tuesday for not having been clearer about the “sins and crimes” of Archbishop Rembert Weakland, in an earlier tweet noting the death of the Benedictine and retired prelate.