Canada's next cardinal, a missionary against secularism 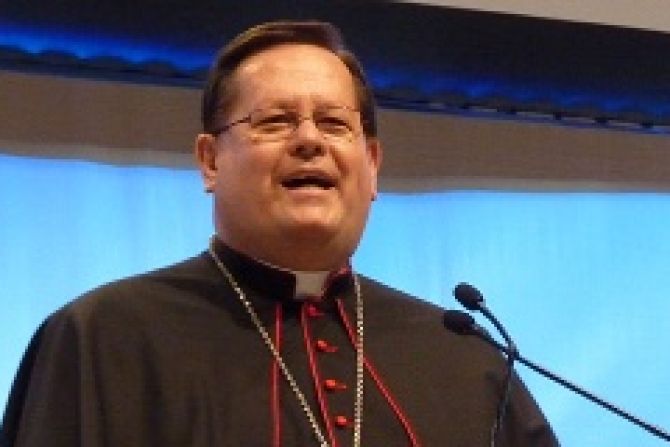 Archbishop Gerald Lacroix of Quebec, who will be made a cardinal at the Feb. 22 consistory, is a missionary for the new evangelization in Canada, after having been for 10 years a missionary in Colombia.

At 56, Archbishop Lacroix will be the third youngest member of the College of Cardinals. He was born in 1957 on a dairy farm 190 miles east of Montreal. When his parents were unable to make ends meet, they moved to New Hampshire when Gerald was eight, which borders Quebec province, in search of a better life.

While a senior at Trinity High School in Manchester, N.H., Archbishop Lacroix became a member of the Pius X Secular Institute, according to the New Hampshire Union Leader. The institute is a form of consecrated life, in which secular members live the evangelical counsels of poverty, chastity, and obedience through their lives in the world.

Archbishop Lacroix returned to Quebec when he was 19, and worked at a print shop and in restaurants. He studied theology at Laval University in Quebec City while pursuing his vocation to consecrated life.

The Union Leader reports that he became a missionary in Colombia in 1981, where he worked in a health clinic for the poor, returning to Quebec to study for the priesthood.

Archbishop Lacroix was ordained a priest in the Pius X Secular Institute in 1998, and then returned to his mission work in Latin America.

He was then consecrated as an auxiliary bishop of the Archdiocese of Quebec in 2009, a post he held until 2011. The previous year, the Archbishop of Quebec, Cardinal Marc Ouellet, had been appointed prefect of the Congregation for Bishops, and Lacroix succeeded him as head of the Quebec archdiocese.

Archbishop Lacroix' time in Quebec City, the provincial capital, has been marked by an increasing "closed secularism" in which the government actively secularizes society and pushes religion "out of the public square altogether," according to a Quebecois Catholic school administrator.

While 83 percent of Quebecois are Catholics,  in a "quiet revolution" many have "turned their backs on their Catholic roots, according to the Toronto daily The Globe and Mail.

Archbishop Lacroix has called it a "tsunami of secularization," and has made it his mission to evangelize the Quebecois.

His efforts at the new evangelization in Quebec have included defending parents' roles as their children's first educators, attending a 20,000 person pro-life walk in Ottawa, and opposing the Quebec Charter of Values – a bill that would restrict expressions of faith and religious belief in the public square.

Archbishop Lacroix becomes the fourth cardinal to hail from Canada. In addition to Cardinal Ouellet, 69, who is now based in Rome, he joins Cardinal Thomas Collins, Archbishop of Toronto, who is 67, and Cardinal Jean-Claude Turcotte, 77, Archbishop Emeritus of Montreal.

Archbishop Lacroix is among 19 men who will be given the red hat of a cardinal at the Vatican later this month, and is the sole representative from North America.