For terminally-ill seminarian, a life with suffering is not void of dignity 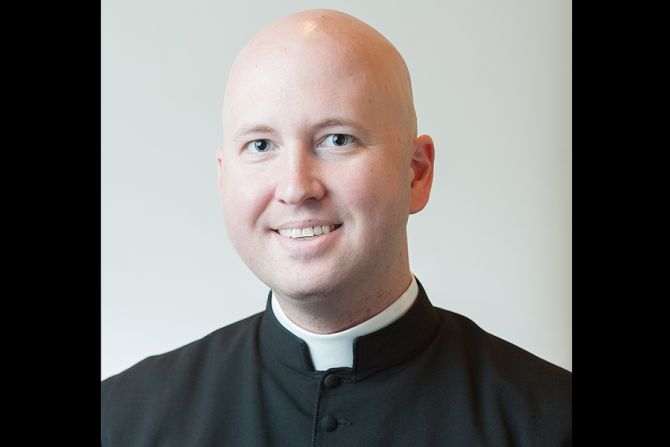 A seminarian is looking forward to his ordination to the diaconate this spring and the priesthood a year later, even though he was given roughly a year and a half to live back in 2008.

Philip Johnson, who is now 30, was diagnosed with a Grade III brain cancer known as anaplastic astrocytoma six years ago when he was serving as a naval officer in the Persian Gulf.

"I remember the moment I saw the computer images of the brain scans – I went to the Catholic chapel on base and fell to the floor in tears.  I asked God, 'why me?'" Johnson wrote in an Oct. 22 column, "Dear Brittany: Our Lives Are Worth Living, Even With Brain Cancer," for the Diocese of Raleigh website.

He was sent home to the U.S. for radiation and chemotherapy and then discharged from the Navy before entering formation for the priesthood, a calling he said he was aware of since he was 19.

Even with aggressive treatment, most research shows that the average survival time for this type of cancer is 18 months, he said.

Quoting the 29-year-old woman who has documented her decision to die by physician-assisted suicide in an online video, Brittany Maynard, Johnson said that "being told you have that kind of timeline still feels like you're going to die tomorrow."

After consulting with his doctors, Johnson learned that he will "gradually lose control of my bodily functions at a young age, from paralysis to incontinence, and it is very likely that my mental faculties will also disappear and lead to confusion and hallucinations before my death."

Much like this terminally-ill woman, he does not want to die or "suffer the likely outcome of this disease."

"I do not think anyone wants to die in this way."

However, Johnson believes that such suffering does not diminish his worth as a person.
"My life means something to me, to God, and to my family and friends, and barring a miraculous recovery, it will continue to mean something long after I am paralyzed in a hospice bed."

"My family and friends love me for who I am, not just for the personality traits that will slowly slip away if this tumor progresses and takes my life."

Johnson recognizes Maynard's temptation to end her life "on her own terms." He admitted that at times he wished that the cancer would take his life quickly to end the suffering and that he hoped for a miracle to be cured of the cancer.

Having been given this long to live has now proved to be a miracle in itself, Johnson said. In fact, he has "experienced countless miracles" throughout his illness.

In his preparation for the priesthood, he has been able to serve other terminally ill people and learned that "suffering and heartache that is part of the human condition does not have to be wasted and cut short out of fear or seeking control in a seemingly uncontrollable situation."

"Perhaps this is the most important miracle for me."

Avoiding suffering at all costs – even at the expense of one's life – is a way to try to gain control "in the midst of turmoil," but it ignores the redemptive value of suffering.

"We do not seek pain for its own sake, but our suffering can have great meaning if we try to join it to the Passion of Christ and offer it for the conversion or intentions of others."

Johnson said that by ending her life prematurely, Maynard will be missing out on the "most intimate moments of her life" in return for a faster option "that focuses more on herself than anyone else."

In his own experience, the seminarian has endured sadness, but has also experienced periods of "great joy."

"I still get sad. I still cry. I still beg God to show me His will through all of this suffering and to allow me to be His priest if it be His will, but I know that I am not alone in my suffering," he said, pointing to the support of his family, friends, and the Church.

Johnson said he will keep praying for Maynard in her illness, that she will "understand the love we all have for her before she takes her own life."

If she decides against her suicide and chooses to fight the disease, she would be "an incredible example and inspiration to countless others in her situation."

"She would certainly be an inspiration to me as I continue to fight my own cancer."