Count on it: Mother Angelica will always be with EWTN, says CEO 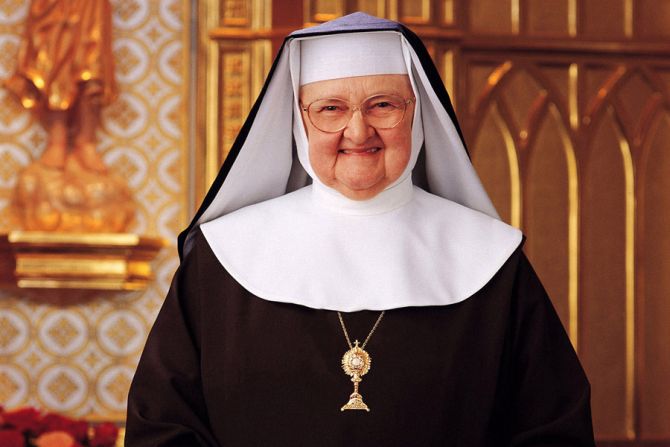 Fans of Mother Angelica should know that her influence will not wane at EWTN, where she will always have a place, said the network's CEO during the Family Talk at the 2017 EWTN Family Celebration in Worcester, Mass, Sept. 9-10.

"Her message really resonates with everyone universally… that's an incredible, incredible thing," said Michael P. Warsaw, Chairman of the Board and Chief Executive Officer at EWTN Global Catholic Network.

"One of the remarkable things we've commented about this: how fresh and how evergreen Mother Angelica's shows are," he said. "Many of these shows are 30 years old, and yet they seem as if they were just recorded today. Her message is really timeless in that respect."

Mother Mary Angelica of the Annunciation, a Poor Clare nun, founded EWTN in 1981. She passed away on Easter Sunday 2016, after a long period out of the public eye following a severe stroke in 2001. In addition to running a network that became the largest religious media network in the world, she hosted a popular call-in show, "Mother Angelica Live," in which she catechized, conducted interviews, and answered viewer questions.

Warsaw said that these shows still have global influence.

"One of the things that has really impacted me as I have traveled and we have expanded internationally is that Mother Angelica really does translate across any language group," Warsaw said Sept. 9 at the EWTN Family Celebration in Worcester, Mass.

Warsaw, together with several other EWTN leaders, spoke to a crowd of hundreds at Worcester's DCU Center on Saturday afternoon in a Family Talk. The talk is a way for EWTN viewers to engage with the network, asking questions and making suggestions.

One viewer, Maria from Somerset, Mass., wanted to be certain that EWTN would continue to broadcast Mother Angelica's shows.

"I think you can count on the fact that Mother Angelica will always be a part of the on-air programming," Warsaw replied.

Among stories recounted at the Family Talk was an Australian archbishop's encounter with a woman who was in a rehabilitation center.

"And she said: 'Shh! I'm praying the rosary with EWTN. You should sit down and wait'."

"And so, he dutifully pulled his rosary out of his pocket and prayed his rosary along with her, and made his visit afterward," Warsaw said.

A recurring concern among attendees was the situation of family members and friends who were no longer practicing Catholics.

Zachary, a 14-year-old high school freshman, mentioned a friend who had drifted away from the faith and asked how to help her return to the practice of the faith.

Father Mark Mary Cristina, MFVA, responded: "Certainly encourage her to pray. If she's not going to Mass, invite her to go to Mass with you."

"Sometimes I think when we are in grief or struggling, practicing our faith can help increase our faith," the priest said. "Certainly be a good listener, pray for her, try to encourage her to pray."

"And we'll pray for you," Warsaw added.

"I believe that there are people walking this earth that are alive today because of EWTN's pro-life programming," he said.

For his part, Warsaw cited letters from women who had considered abortions at one point in their lives. Some had written in saying: "My baby was born because at that moment when I needed EWTN, you were there."

He cited the launch of the news show EWTN Pro-Life Weekly and its focus on key issues in the pro-life cause at all stages of life.

"We're really trying to motivate people to get involved in the pro-life movement, whatever state they are in," said Warsaw. "There's really no other outlet that has done as much in terms of the pro-life message, the pro-life cause, as the network has done over these years."

"I think it comes back to the importance of prayer. The centrality of that is certainly Mother Angelica's mission," he said.

EWTN Global Catholic Network, in its 37th year, is the largest religious media network in the world. EWTN's 11 TV channels are broadcast in multiple languages 24 hours a day, seven days a week to over 268 million television households in more than 145 countries and territories. EWTN services also include radio channels transmitted through SIRIUS/XM, iHeart Radio, and over 500 domestic and international AM & FM radio affiliates; a worldwide shortwave radio service; the largest Catholic website in the U.S.; electronic and print news services, including "The National Catholic Register" newspaper, and several global wire services; as well as a publishing arm. CNA is part of the EWTN family.