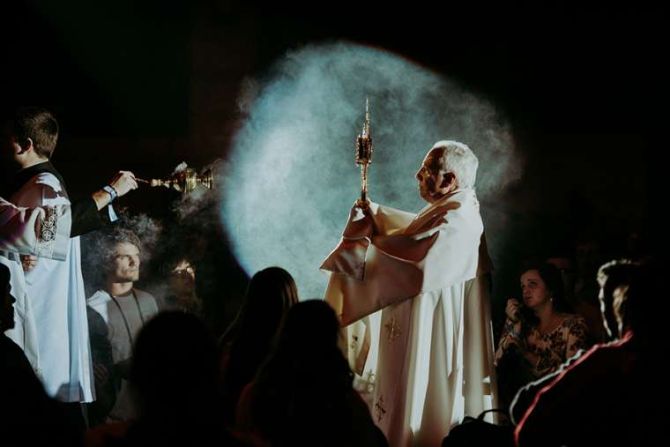 Eucharistic adoration at the SLS18 conference in Chicago. | FOCUS.

Two Eastern European bishops asked the Synod of Bishops in Rome for a greater focus on the importance of the Eucharist, the liturgy and fatherhood in the final Synod document during their interventions this week.

These issues were raised by Archbishop Tadeusz Kondrusiewicz of Minsk Belarus and Archbishop Zbignevs Stankevics of Riga, Latvia at the synod of bishops on young people, the faith, and vocational discernment being held at the Vatican Oct. 3-28. Synod fathers periodically have the opportunity to give interventions lasting 3-5 minutes.

In his prepared intervention on Oct. 10, Archbishop Kondrusiewicz asked the Synod fathers to emphasize the importance and centrality of the Eucharist in the final document.

Referencing the the Instrumentum Laboris (working document) of the Synod of Bishops, Archbishop Kondrusiewicz noted that though the document has "great pastoral value," it mentions the Eucharist only twice and the sacraments only eight times.

Archbishop Kondrusiewicz said that Eucharist is fundamental to the Catholic faith, and gave an example of how the Eucharist has drawn Belarusian youth deeper into their faith.

Because Belarus borders the Baltic States, Belarusan youth traveled to Lithuania and Latvia to take part in the recent Papal visit on Sept. 22-25.

The Archbishop recalled that 2,000 Belarusian faithful, half of them young people, traveled to Pope Francis' Mass in Kaunas Sep. 23, while only 500 took part to the meeting with the youth scheduled in Vilnius Sep. 22.

Archbishop Kondrusiewicz said that those young people recognized the importance of the Mass, as well as of meeting the Holy Father.

He added that the Church needs not just "horizontal efforts...we need vertical efforts," meaning that the Church must not only be "a comfortable place for everyone, it must above all be a place of strong spiritual formation."

Archbishop Kondrusiewicz also remarked on the need to give more value to spiritual things in the final document, and backed those who raised the issue of the importance of liturgy.

"We should always remember that liturgy is source and climax of Christian life, and at the same time we must recognize that we lost this truth, and celebrations of Eucharist are turned into theater," he said.

Archbishop Kondrusiewicz underscored that "our duty, as shepherds, is to revive the true spirit and beauty of liturgy," and voiced his support for the proposal that the Congregation for the Divine Worship and Discipline of Sacraments draft a new document on the importance of adherence to liturgical norms.

"Young people admire good liturgy, and our duty is to fulfil their wish," he said.

Fatherhood was the center of Archbishop Zbignevs Stankevics' intervention during the first week of the Synod. Though his intervention received much consensus, the issue was not included in the minor circles reports.

Archbishop Stankevics noted that fathers are crucial for the transmission of the faith, as "data show that when a father is seriously involved in faith issue, there is a 75 percent probability that (his) children will follow him, while when only the mother is involved in the faith, there is just a 15 percent chance that (her) children will follow."

Archbishop Stankevics said that Catholics must look past the "stereotype that education to faith must be entrusted to mother," as "in God's plan, man defends (his family) not only from concrete dangers, but also from spiritual and ideological dangers."

Therefore, he said, "it is the father's task to care for his family's relationship with God and encourage (his) wife and children in practicing the faith.