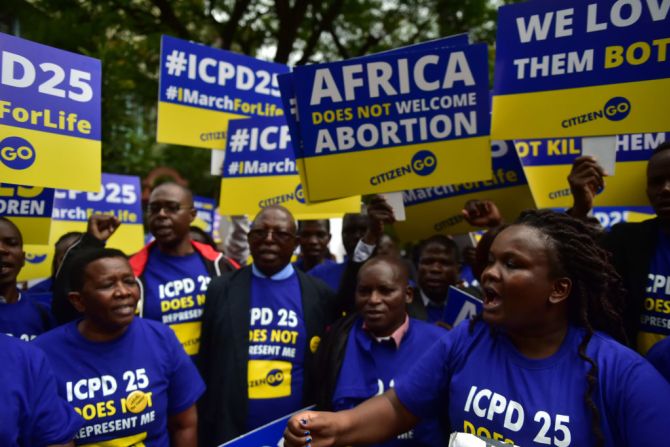 Kenya's pro family activists deliver over 68,000 signatures to the President of Kenya to remove support for the ICPD25 in Nairobi, Nov. 11, 2019. | Simon Maina/AFP via Getty Images.

On the sidelines of the Nairobi Summit, the US and 10 other nations delivered a joint statement Thursday indicating their commitment to women's health, and their concern over the summit's process and content.

The statement echoes concerns that the international gathering is too focused on "reproductive rights".

"We are … concerned about the content of some of the key priorities of this Summit," read the Nov. 14 joint statement from the US, Brazil, Belarus, Egypt, Haiti, Hungary, Libya, Poland, Senegal, St. Lucia, and Uganda.

"We do not support references in international documents to ambiguous terms and expressions, such as sexual and reproductive health and rights (SRHR), which do not enjoy international consensus … In addition, the use of the term SRHR may be used to actively promote practices like abortion."

The Nov. 12-14 Nairobi Summit is sponsored by the UN Population Fund and the governments of Kenya and Denmark, and it marks the 25th anniversary of the International Conference on Population and Development, which was held in Cairo.

The 11 nations opposed to the summit's abortion focus recalled that the 1994 Cairo Conference "had as its stated objectives and actions to collectively address the critical challenges and interrelationships between population and sustained economic growth in the context of sustainable development."

In the past 25 years "many countries have made substantial progress in reducing death rates and increasing education and income levels, including by improving the educational and economic status of women. It is noteworthy that, as opposed to the population growth predictions included in the ICPD Program of Action, these predictions have not come to pass," the joint statement noted.

"Indeed, in most regions of the world today, fertility is below population replacement rates. As a result, family planning should focus both on the voluntary achievement of pregnancy as well as the prevention of unwanted pregnancy."

The 11 countries affirmed the "key foundational principles" of the Cairo Conference, saying, "We strongly support the holistic pursuit of the highest attainable outcomes of health, life, dignity, and well-being … this includes but is not limited to: reproductive concerns; maternal health; primary health care; voluntary and informed family planning; family strengthening; equal educational and economic opportunities for women and men."

"We wish to emphasize that the agreement reached at Cairo remains a solid foundation for addressing new challenges within a consensus-driven process that gives each government equal opportunity to negotiate a broadly accepted document within the UN, reaffirming that health is a precondition for and an outcome and indicator of the realization of ICPD," read the joint statement.

The nations said the Cairo Conference's action program was "approved by consensus" because, in part, it "made clear that the conference did not create any new international human rights."

The joint statement noted, "There is no international right to abortion; in fact, international law clearly states that '[e]veryone has the right to life'" and that the Cairo Conference said "that countries should 'take appropriate steps to help women avoid abortion, which in no case should be promoted as a method of family planning' (ICPD 7.24) and to 'reduce the recourse to abortion'."

The 11 countries added that they "cannot support a sex education that fails to adequately engage parents and which promotes abortion as a method of family planning."

They indicated that "we would have appreciated more transparency and inclusiveness in the preparation of the Conference, including regarding criteria for civil society participation. While the Cairo ICPD Program of Action was negotiated and implemented with and by the entire UN General Assembly membership, only a small handful of governments were consulted on the planning and modalities of the 2019 Nairobi Summit. Therefore, outcomes from this summit are not intergovernmentally negotiated, nor are they the result of a consensus process. As a result, they should not be considered normative."

The countries said the Nairobi Summit "is centered on only certain aspects of the ICPD Program of Action and does not fully reflect all views and positions of the Member States … unless negotiated and adopted by consensus of all Member States, within the process and structure of an international body such as the UN General Assembly, no ICPD follow-on document has consensual weight or standing amongst governments."

"We call upon Member States to maintain the original and legitimate 1994 ICPD principles … that explicitly retain important government statements and reservations that permitted consensus, to reiterate their reservations to the ICPD Program of Action as reflected in the conference's report, and to focus our efforts, resources, and determination to fulfill the unfinished work of attaining sustainable development for every nation so as to promote the dignity of the human person and human flourishing."

The objections of the 11 countries represented by the joint statement echoed concerns from the Holy See and from bishops in Kenya.

The Holy See is not partipating in the summit, saying that the organizers chose "to focus the conference on a few controversial and divisive issues that do not enjoy international consensus and that do not reflect accurately the broader population and development agenda outlined by the ICPD."

"The ICPD and its encompassing Programme of Action within the international community's broad development agenda should not be reduced to so-called 'sexual and reproductive health and rights' and 'comprehensive sexuality education,'", the Holy See stated.

Bishop Alfred Rotich, Bishop Emeritus of the Military Ordinariate of Kenya and chair of the Kenyan bishops' family life office, told ACI Africa: "We find such a conference not good for us, (and) destroying the agenda for life."

Archbishop Martin Kivuva of Mombasa described the summit's agenda as "unacceptable according to our teaching of the Catholic Church."

The US delivered a commitment statement at the summit Nov. 13, saying it is committed "to empowering women and girls to thrive, but this statement is only intended for the purposes of this reading and is not to be used as an endorsement of the commitments of this summit."

The commitment statement added that the US "has been, and will be a prime advocate and will continue to invest in programs which empower women and girls to realize their full potential, reinforce their inherent dignity, promote and advance their equality, protect their inalienable rights, and support optimal health outcomes across their lifespans. Families, positive male figures, (including caring fathers), communities, and civil society, (including faith based organizations), play an important role in supporting women and girls to thrive."

Dr. Frederick Wamalma, regional president of Pax Romana International Catholic Movement for Intellectual and Cultural Affairs, told ACI Africa that the desire of many participants in the Nairobi Summit to have a decreasing rate of population growth in Africa is a fallacy.

"Africa needs to focus on population growth because we need to grow the population of working people, which is very important for us," he said.

"If you go to some of the European countries, they don't have the working age population. So, they have this larger population of old people who are no longer working. We don't want to be caught up with what we're seeing there," Wamalma stated.

He added: "From a developing country point of view, population shouldn't be a problem. What we need to be stressed with is being able to give these young people who are coming, joining the labour market the right skills to be able to be productive in the labour market."

Rep. Chris Smith, a congressman from New Jersey, wrote in a Nov. 11 opinion piece at the Wall Street Journal that through the Nairobi Summit, "the governments of Kenya and Denmark and the United Nations Population Fund are attempting to hijack the U.N.'s global population and development work to support an extreme pro-abortion agenda."

Smith, who attended the Cairo Conference, said the "conveners of the Nairobi Summit have blocked attendance by conservative organizations and excluded countries and stakeholders that disagree with their agenda from offering input on the substance and planning of the conference," including the US.

He lamented that "key elements of the Cairo program are missing from the Nairobi Summit agenda," noting that the ICPD recognized sex-selective abortion as a harmful practice.

"The Nairobi Summit isn't a true reflection of ICPD but a gathering of like-minded individuals and organizations departing from the Cairo consensus as they promote a pro-abortion agenda while attempting to exploit Cairo's name and reputation," the congressman concluded.

To counter the agenda of the Nairobi Summit, the Kenya Christian Professionals Forum, with the backing of Kenya's bishops, has organized a parallel convention to be held Nov. 11-14.

Magdalene Kahiu contributed to this report. 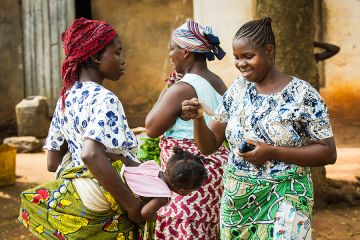 The Holy See will not participate in next week's Nairobi Summit, its mission to the UN announced Friday, saying next week's international gathering is too focused on “reproductive rights”. Bishops in Africa have raised concerns about the agenda of the Nairobi Summit, a United Nations gathering being held next week, saying the meeting will be destructive to humanity and the values around human life.