Our Lady of FatimaFeast day: May 13 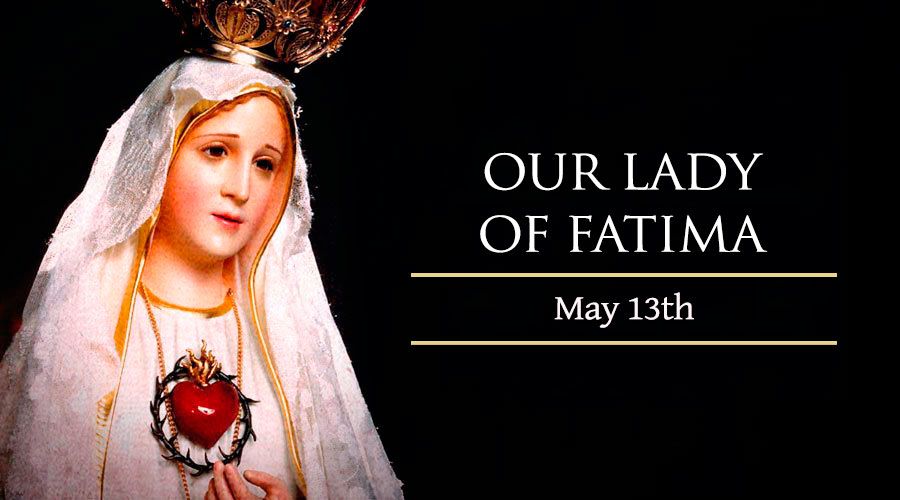 May 13 is the anniversary of the apparition of Our Lady to three shepherd children in the small village of Fatima in Portugal in 1917.  She appeared six times to Lucia, 9, and her cousins Francisco, 8, and his sister Jacinta, 6, between May 13, 1917 and October 13, 1917.

The story of Fatima begins in 1916, when, against the backdrop of the First World War which had introduced Europe to the most horrific and powerful forms of warfare yet seen, and a year before the Communist revolution would plunge Russia and later Eastern Europe into six decades of oppression under militant atheistic governments, a resplendent figure appeared to the three children who were in the field tending the family sheep. “I am the Angel of Peace,” said the figure, who appeared to them two more times that year exhorting them to accept the sufferings that the Lord allowed them to undergo as an act of reparation for the sins which offend Him, and to pray constantly for the conversion of sinners.

Then, on the 13th day of the month of Our Lady, May 1917, an apparition of ‘a woman all in white, more brilliant than the sun’ presented itself to the three children saying “Please don’t be afraid of me, I’m not going to harm you.” Lucia asked her where she came from and she responded,  “I come from Heaven.”  The woman wore a white mantle edged with gold and held a rosary in her hand. The woman asked them to pray and devote themselves to the Holy Trinity and to “say the Rosary every day, to bring peace to the world and an end to the war.”

She also revealed that the children would suffer, especially from the unbelief of their friends and families, and that the two younger children, Francisco and Jacinta would be taken to Heaven very soon but Lucia would live longer in order to spread her message and devotion to the Immaculate Heart.

In the last apparition the woman revealed her name in response to Lucia’s question:   “I am the Lady of the Rosary.”

That same day, 70,000 people had turned out to witness the apparition, following a promise by the woman that she would show the people that the apparitions were true. They saw the sun make three circles and move around the sky in an incredible zigzag movement in a manner which left no doubt in their minds about the veracity of the apparitions.  By 1930 the Bishop had approved of the apparitions and they have been approved by the Church as authentic.

The messages Our Lady imparted during the apparitions to the children concerned the violent trials that would afflict the world by means of war, starvation, and the persecution of the Church and the Holy Father in the twentieth century if the world did not make reparation for sins. She exhorted the Church to pray and offer sacrifices to God in order that peace may come upon the world, and that the trials may be averted.

Our Lady of Fatima revealed three prophetic “secrets,” the first two of which were revealed earlier and refer to the vision of hell and the souls languishing there, the request for an ardent devotion to the Immaculate Heart of Mary, the prediction of the Second World War, and finally the prediction of the immense damage that Russia would do to humanity by abandoning the Christian faith and embracing Communist totalitarianism.  The third “secret” was not revealed until the year 2000, and referred to the persecutions that humanity would undergo in the last century: “The good will be martyred; the Holy Father will have much to suffer; various nations will be annihilated'”.  The suffering of the popes of the 20th century has been interpreted to include the assassination attempt on Pope John Paul II in 1981, which took place on May 13, the 64th anniversary of the apparitions. The Holy Father attributed his escape from certain death to the intervention of Our Lady: “... it was a mother's hand that guided the bullet's path and in his throes the Pope halted at the threshold of death.”

What is the central meaning of the message of Fatima? Nothing different from what the Church has always taught: it is, as Cardinal Ratzinger, now Pope Benedict the XVI,  has put it, “the exhortation to prayer as the path of “salvation for souls” and, likewise, the summons to penance and conversion.”

Perhaps the most well known utterance of the apparition of Our Lady at Fatima was her confident decalaration that  “My Immaculate Heart will triumph”. Cardinal Ratzinger has interpreted this utterance as follows: “The Heart open to God, purified by contemplation of God, is stronger than guns and weapons of every kind. The fiat of Mary, the word of her heart, has changed the history of the world, because it brought the Saviour into the world—because, thanks to her Yes, God could become man in our world and remains so for all time. The Evil One has power in this world, as we see and experience continually; he has power because our freedom continually lets itself be led away from God. But since God himself took a human heart and has thus steered human freedom towards what is good, the freedom to choose evil no longer has the last word. From that time forth, the word that prevails is this: “In the world you will have tribulation, but take heart; I have overcome the world” (Jn 16:33). The message of Fatima invites us to trust in this promise.