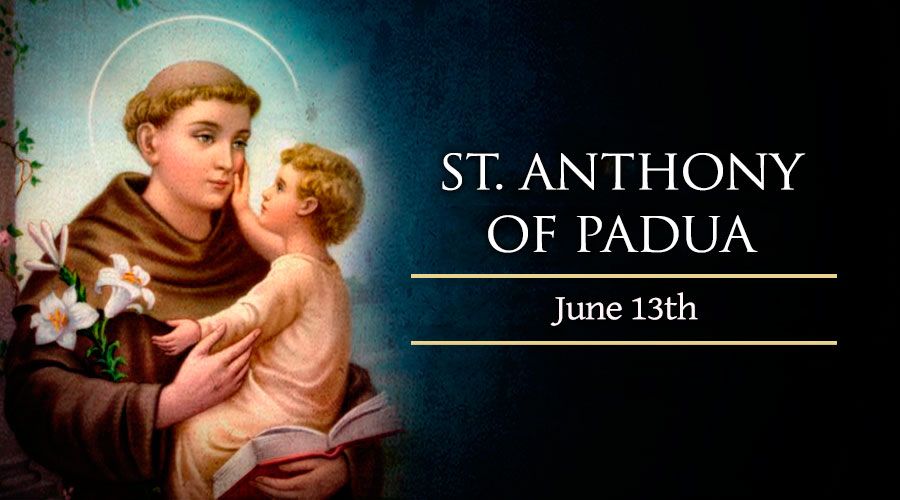 On June 13, Catholics honor the memory of the Franciscan priest St. Anthony of Padua. Although he is popularly invoked today by those who have trouble finding lost objects, he was known in his own day as the “Hammer of Heretics” due to the powerful witness of his life and preaching.

The saint known to the Church as Anthony of Padua was not born in the Italian city of Padua, nor was he originally named Anthony. He was born as Ferdinand in Lisbon, Portugal during 1195, the son of an army officer named Martin and a virtuous woman named Mary. They had Ferdinand educated by a group of priests, and the young man made his own decision to enter religious life at age 15.

Ferdinand initially lived in a monastery of the Augustinian order outside of Lisbon. But he disliked the distraction of constant visits from his friends, and moved to a more remote house of the same order. There, he concentrated on reading the Bible and the Church Fathers, while living a life of asceticism and heartfelt devotion to God.

Eight years later, in 1220, Ferdinand learned the news about five Franciscan friars who had recently died for their faith in Morocco. When their bodies were brought to Portugal for veneration, Ferdinand developed a passionate desire to imitate their commitment to the Gospel. When a group of Franciscans visited his monastery, Ferdinand told them he wanted to adopt their poor and humble way of life.

Some of the Augustinian monks criticized and mocked Ferdinand's interest in the Franciscans, which had been established only recently, in 1209. But prayer confirmed his desire to follow the example of St. Francis, who was still living at the time.

He eventually obtained permission to leave the Augustinians and join a small Franciscan monastery in 1221. At that time he took the name Anthony, after the fourth-century desert monk St. Anthony of Egypt.

Anthony wanted to imitate the Franciscan martyrs who had died trying to convert the Muslims of Morocco. He traveled on a ship to Africa for this purpose, but became seriously ill and could not carry out his intention. The ship that was supposed to take him to Spain for treatment was blown off course, and ended up in Italy.

Through this series of mishaps, Anthony ended up near Assisi, where St. Francis was holding a major meeting for the members of his order. Despite his poor health, Anthony resolved to stay in Italy in order to be closer to St. Francis himself. He deliberately concealed his deep knowledge of theology and Scripture, and offered to serve in the kitchen among the brothers.

At the time, no one realized that the future “Hammer of Heretics” was anything other than a kitchen assistant and obedient Franciscan priest. Around 1224, however, Anthony was forced to deliver an improvised speech before an assembly of Dominicans and Franciscans, none of whom had prepared any remarks.

His eloquence stunned the crowd, and St. Francis himself soon learned what kind of man the dishwashing priest really was. In 1224 he gave Anthony permission to teach theology in the Franciscan order –  “provided, however, that as the Rule prescribes, the spirit of prayer and devotion may not be extinguished.”

Anthony taught theology in several French and Italian cities, while strictly following his Franciscan vows and preaching regularly to the people. Later, he dedicated himself entirely to the work of preaching as a missionary in France, Italy and Spain, teaching an authentic love for God to many people – whether peasants or princes – who had fallen away from Catholic faith and morality.

Known for his bold preaching and austere lifestyle, Anthony also had a reputation as a worker of miracles, which often came about in the course of his disputes with heretics.

His biographers mention a horse, which refused to eat for three days, and accepted food only after it had placed itself in adoration before the Eucharist that Anthony brought in his hands. Another miracle involved a poisoned meal, which Anthony ate without any harm after making the sign of the Cross over it. And a final often recounted miracle of St. Anthony’s involved a group of fish, who rose out of the sea to hear his preaching when heretical residents of a city refused to listen.

After Lent in 1231, Anthony's health was in decline. Following the example of his patron – the earlier St. Anthony, who had lived as a hermit – he retreated to a remote location, taking two companions to help him. When his worsening health forced him to be carried back to the Franciscan monastery in Padua, crowds of people converged on the group in hopes of paying their homage to the holy priest.

The commotion surrounding his transport forced his attendants to stop short of their destination. After receiving the last rites, Anthony prayed the Church's seven traditional penitential psalms, sung a hymn to the Virgin Mary, and died on June 13 at the age of 36.

St. Anthony's well-established holiness, combined with the many miracles he had worked during his lifetime, moved Pope Gregory IX – who knew the saint personally – to canonize him one year after his death.

“St. Anthony, residing now in heaven, is honored on earth by many miracles daily seen at his tomb, of which we are certified by authentic writings,” proclaimed the 13th-century Pope.