St. Augustine of CanterburyFeast day: May 27 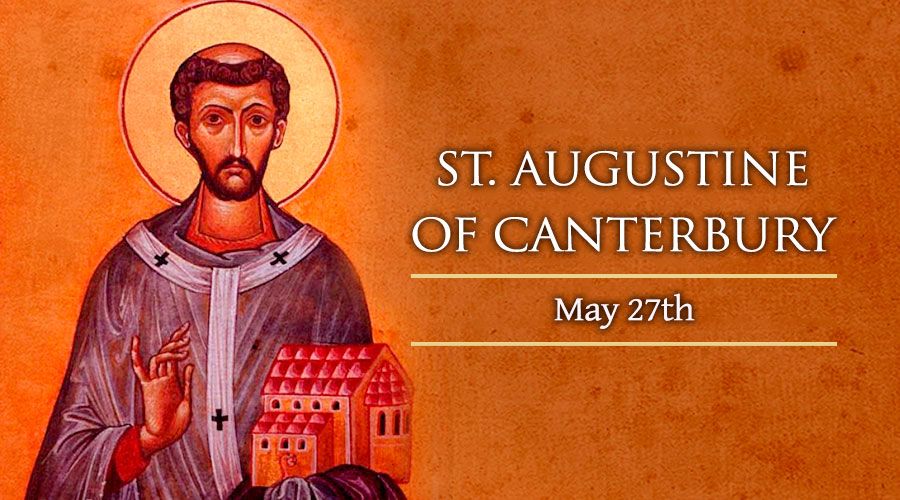 An Italian Benedictine monk who became the “Apostle of the English,” Saint Augustine of Canterbury is honored by the Catholic Church on May 27.

Under the direction of Pope Saint Gregory the Great, Augustine founded the famous See of Canterbury and preached the Catholic faith to the country's Anglo-Saxon pagans during the late sixth and early seventh centuries.

He is not be confused with the earlier St. Augustine of Hippo, the famous author of the “Confessions” and “City of God.”

Augustine's date of birth cannot be established, nor are any details of his early life known. Most likely born in Rome to a noble family, he entered monastic life as a young man. The community he joined had been recently founded by a Benedictine monk named Gregory, who would go on to become Pope and eventually be known as St. Gregory the Great. The friendship between Gregory and Augustine had great historical consequences, as it was the Pope who would eventually send his fellow monk to evangelize England.

Around 595, five years into his 14-year pontificate, Pope Gregory set to work on a plan for the conversion of the English people. The Catholic faith had already been preached and accepted among England's original Celtic inhabitants in earlier times, but from the mid-fifth century onward, the country was dominated by Anglo-Saxon invaders who did not accept Christianity, and were not converted by the small number of isolated Celtic Christian holdouts. Thus, England largely had to be evangelized anew.

For this task the Pope chose a group of around forty monks – including Augustine, who was to represent the delegation and communicate on its behalf. Though he was not explicitly chosen as its leader at that time, that was the role he ended up taking on with Gregory’s support. The group left for England in June 596, but some of the missionaries lost their nerve after hearing fearsome reports about the Anglo-Saxons. Augustine ended up returning to Rome, where he got further advice and support from the Pope.

Persuaded to continue on their way, the missionary-monks reached their port of departure and set sail for England in spring of 597. After arriving they gained an audience with King Ethelbert of Kent, a pagan ruler whose Frankish wife Queen Bertha was a Christian. Speaking with the king through an interpreter, Augustine gave a powerful and straightforward presentation of the Gospel message, speaking of Christ’s redemption of the world and his offer of eternal life.

Ethelbert would later convert, and eventually even be canonized as a Saint. But his initial response to Augustine’s preaching was only mildly positive: he would receive the missionaries with hospitality, and permit them to evangelize without any restriction. Despite his early ambivalence, however, the king became a generous patron of the monks. They made their home in Canterbury, after dramatically entering the city in procession with the Cross and an image of Christ.

The Canterbury community lived according to the Rule of St. Benedict, as they had in Italy, but they also preached in the surrounding area in accordance with their mission. Augustine and his companions succeeded in converting King Ethelbert himself, while Queen Bertha also became more zealous in her practice of the faith after her husband’s baptism. Augustine traveled to Gaul, where he was consecrated as a bishop for the English Church. By Christmas of 597, over ten thousand people were actively seeking baptism from the missionaries.

Through his written correspondence, Pope Gregory continued to guide the work of Augustine – the first Archbishop of Canterbury – and the other Catholic missionaries. The great Pope, and the “Apostle of England,” would both die during the same year, 604.

Though Augustine had not managed to sort out some disagreements with the native Celtic bishops, he had given the faith a firm foothold among the Anglo-Saxons. Canterbury would continue on for centuries as the ranking see of English Catholicism, until its fall into schism during the 16th century.

Human rights activist to China: Don’t wait till 2025 to lift all birth restrictions