St. Bede the VenerableFeast day: May 25 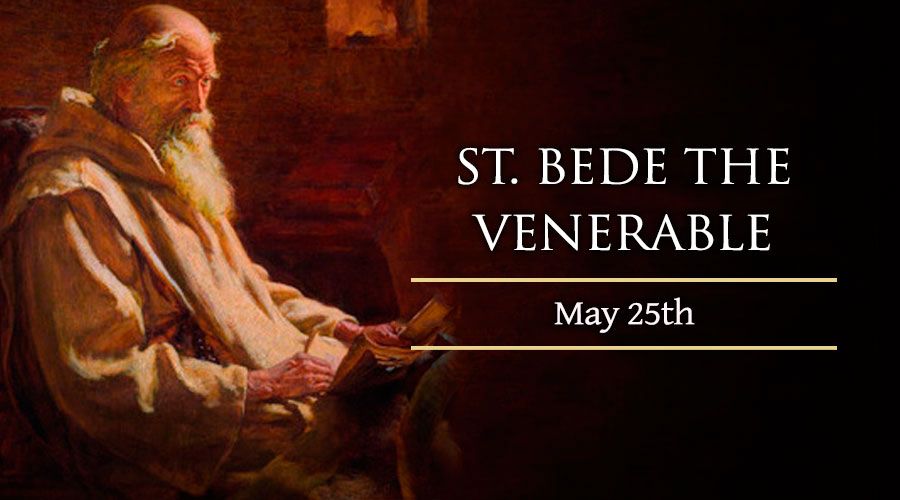 The Catholic Church will celebrate the feast of St. Bede on May 25. The English priest, monk, and scholar is sometimes known as “the Venerable Bede” for his combination of personal holiness and intellectual brilliance.

Bede was born during 673 near the English town of Jarrow. His parents sent him at a young age to study at a monastery founded by a Benedictine abbot who would later be canonized in his own right as St. Benedict Biscop. The abbot's extensive library may have sparked an early curiosity in the boy, who would grow up to be a voracious reader and prolific writer.

Later, Bede returned to Jarrow and continued his studies with an abbot named Ceolfrid, who was a companion of St. Benedict Biscop. The abbot and a group of other monks instructed Bede not only in scripture and theology, but also in sacred music, poetry and the Greek language.

Bede's tutors could see that his life demonstrated a remarkable devotion to prayer and study, and Ceolfrid made the decision to have him ordained a deacon when he was 19. Another Benedictine monk and future saint, the bishop John of Beverley, ordained Bede in 691.

He studied for 11 more years before entering the priesthood at the age of 30, around the beginning of the eighth century. Afterward, Bede took on the responsibility of celebrating daily Mass for the members of his Benedictine community, while also working on farming, baking, and other works of the monastery.

As a monk, Bede gave absolute priority to prayer, fasting and charitable hospitality. He regarded all other works as valueless without the love of God and one's neighbor. However, Bede also possessed astounding intellectual gifts, which he used to survey and master a wide range of subjects according to an all-encompassing vision of Christian scholarship.

Bede declined a request to become abbot of his monastery. Instead, he concentrated on writing, and produced more than 45 books –  primarily about theology and the Bible, but also on science, literature, and history. He also taught hundreds of students at the monastery and its school, which became renowned throughout Britain.

During Bede's own lifetime, his spiritual and intellectual gifts garnered wide recognition. His writings on scripture were considered so authoritative that a Church council ordered them to be publicly read in English churches. Some of the most illustrious members of English society made pilgrimages to his monastery to seek his guidance, and he was personally invited to Rome by Pope Sergius.

Bede, however, was unfazed by these honors. Perhaps inspired by the Benedictine monastic ethos, which emphasizes one's absolute commitment to the monastic community, he chose not to visit Rome, or to travel any significant distance beyond the Monastery of Sts. Peter and Paul in Jarrow, during his entire adult life.

Instead, the world came to him – through the visitors he received, according to the Benedictine tradition of hospitality, and through his voluminous reading. And Bede, in turn, reached the world without leaving his monastery, writing books that were copied with reverence for centuries and still read today. He is one of the last Western Christian writers to be numbered among the Church Fathers.

But Bede understood that love, rather than learning, was his life's purpose. “It is better,” he famously said, “to be a stupid and uneducated brother who, working at the good things he knows, merits life in heaven, than to be one who –  though being distinguished for his learning in the Scriptures, or even holding the place of a teacher – lacks the bread of love."

Bede died on the vigil of the feast of the Ascension of Christ in 735, shortly after finishing an Anglo-Saxon translation of the Gospel of John. Pope Leo XIII declared him a Doctor of the Church in 1899.