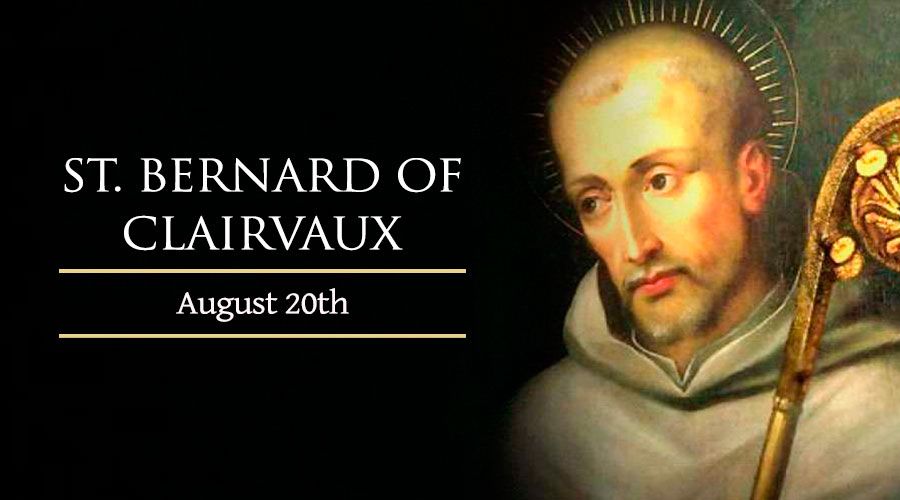 On August 20 the Church celebrates the feast day of St. Bernard of Clairvaux, a Doctor of the Church thanks to his writings and sermons which greatly influenced Europe during the 12th century, and his numerous efforts which helped to avoid a schism in the Church in 1130.

Born in 1090, Bernard spent his early years near Dijon, France before leaving to joining the Cistercians at the age of 22. He was well educated and so passionate about his faith that he convinced his brothers, his uncle, and many of his friends to join him at the abbey.

Bernard first entered the abbey at Citeaux, but only three years later was sent with 12 other monks to establish another monastery in the Diocese of Champagne. The monastery came to be known Clairvaux (Valley of Light). He led the other monks there as the abbot for the rest of his life.

St. Bernard knew how to harmonize the contemplative life with important missionary work, as the Pope noted in 2006. However, the saint’s strict observance of silence and contemplation did not impede him from living a very intense apostolic life. His humility and his commitment to tame his impetuous temperament were exemplary, he said.

The Pope also highlighted the saint’s focus on the truth that God, who is love, created mankind out of love and that man’s salvation consists of adhering firmly to Divine love, revealed through the crucified and risen Christ.

“The richness of St. Bernard’s preaching and his theology were not in pursuing new paths,” the Pope said, “but in succeeding to propose the truth of the faith in a clear and incisive way so as to fascinate the listener and lead the person to prayer.”

St. Bernard is also well-known for his Marian devotion, especially in using and promoting the "Memorare" prayer.

He became widely known throughout Europe and was consulted by Popes and political leaders. He died in 1153 and was canonized less than three decades later in 1174.

In August 2008, Pope Benedict spoke of the saint during his weekly general audience.  He recalled that Pope Pius VIII labeled the “Honey-Sweet Doctor” for his eloquence and that he traveled throughout Europe defending the Christian faith.

Benedict XVI added, “He was also remembered as a Doctor of Mariology, not because he wrote extensively on Our Lady, but because he understood her essential role in the Church, presenting her as the perfect model of the monastic life and of every other form of the Christian life.”