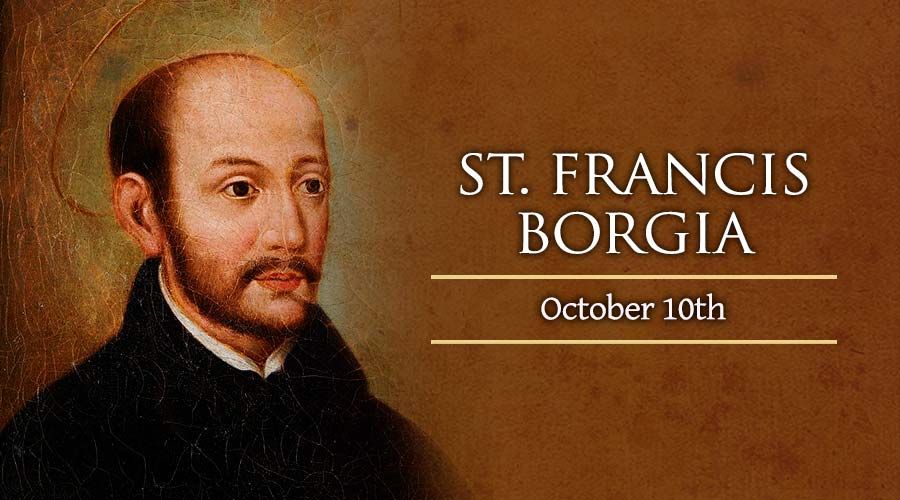 Francis’ grandmother joined her daughther in a convent of Poor Clares after the death of her husband and held a pious influence in the court of the Borgia, to which Francis is indebted. It was with these two women that holiness penetrated into the scandalous lineage of the Borgia family.

Francis grew to be a pious young man, posessed of many natural gifts and a favorite at the court of Charles V.  It is recounted that one day Francis passed through Alcalá, followed by his escort, and exchanged an emotional glance with a poor man being escorted to prison by the Inquisition. This man was Ignatius of Loyola, and at this moment Francis could not have had any idea what an important role this man would play in his destiny.

In 1539 Francis was appointed Viceroy of Catalonia, and four years later, upon the death of his father, the Duke of Gandia. He built a university there, received the degree of Doctor in Theology, and invited the Jesuits to his duchy.

His wife died in 1546, and Francis entered the Society of Jesus in 1548, but was ordered by the Pope to remain in the world until he had fulfilled his obligations to his ten children and his duchy.

Two years later he left Gandia, never to return, and joined the Jesuits in Rome. He immediately set about initiating grand projects – he convinced Ignatius to found the Roman College, and a year later he left for Spain, where his preaching and example sparked a renewal of religious fervour in the country, drawing pilgrims from far and wide to hear him preach.

In 1556 he was placed in charge of all the missions of the Society, and his energetic work transformed them. He also initiated the missions to Peru, New Spain and Brazil.

He was elected as general on July 2, 1565, and although in poor health for his last years, he executed the governance and initiated projects of the Society with great energy. He introduced so many reforms to the society of Jesus that he was considered in some ways to be its second founder. Francis was a man of contemplation and action in the fullest sense, and clearly drew much strength from the silence of his prayer.

He died in Rome on September 30, 1572, in Ferrara, Spain, two days after returning from an apostolic journey to Spain.

Saint Francis Borgia is one of the great saints of the Catholic Reformation, and was cannonized by Pope Clement X in 1670.