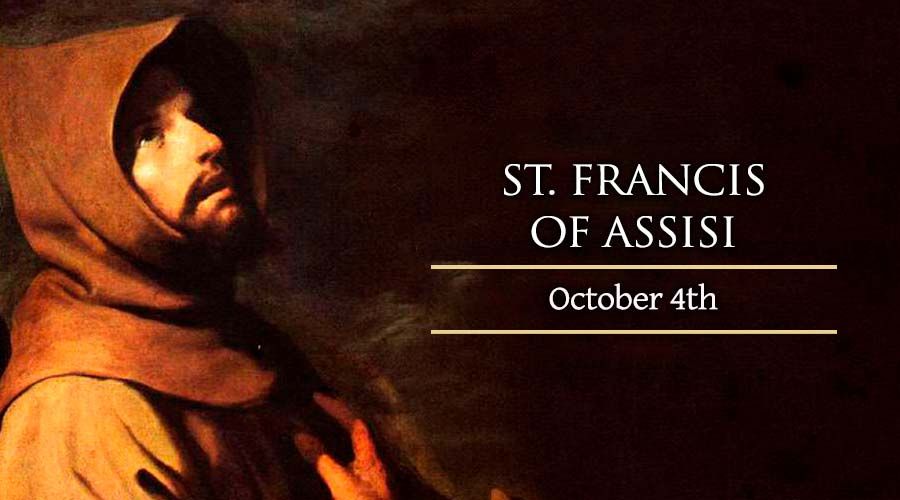 On Oct. 4, Roman Catholics celebrate the feast of St. Francis of Assisi, the Italian deacon who brought renewal to the Church through his decision to follow Jesus' words as literally as possible.

In a January 2010 general audience, Pope Benedict XVI recalled this “giant of holiness” as a “great saint and a joyful man,” who taught the Church that “the secret of true happiness” is “to become saints, close to God.”

The future Saint Francis was born on an uncertain date in the early 1180s, one of the several children born to the wealthy merchant Pietro Bernardone and his wife Pica. He originally received the name Giovanni (or John), but became known as Francesco (or Francis) by his father's choice.

Unlike many medieval saints, St. Francis was neither studious nor pious in his youth. His father's wealth gave him access to a lively social life among the upper classes, where he was known for his flashy clothes and his readiness to burst into song. Later a patron of peacemakers, he aspired to great military feats in his youth and fought in a war with a rival Italian city-state.

A period of imprisonment during that conflict turned his mind toward more serious thoughts, as did a recurring dream that suggested his true “army” was not of this world. He returned to Assisi due to illness in 1205, and there began consider a life of voluntary poverty.

Three major incidents confirmed Francis in this path. In Assisi, he overcame his fear of disease to kiss the hand of a leper. Afterward, he made a pilgrimage to Rome, where he deposited his money at Saint Peter's tomb and exchanged clothes with a beggar. Soon after he returned home, Francis heard Christ tell him in a vision: “Go, Francis, and repair my house, which as you see is falling into ruin.”

Francis began to use his father's wealth to restore churches. This led to a public quarrel in which the cloth-merchant's son removed his clothing and declared that he had no father except God. He regarded himself as the husband of “Lady Poverty,” and resolved to serve Christ as “a herald of the Great King.”

During the year 1208, the “herald” received the inspiration that would give rise to the Franciscan movement. At Mass one morning, he heard the Gospel reading in which Christ instructed the apostles to go forth without money, shoes, or extra clothing. This way of life soon became a papally-approved rule, which would attract huge number of followers within Francis' own lifetime.

Through his imitation of Christ, Francis also shared in the Lord's sufferings. He miraculously received Christ's wounds, the stigmata, in his own flesh during September of 1224. His health collapsed over the next two years, a “living sacrifice” made during two decades of missionary preaching and penance.