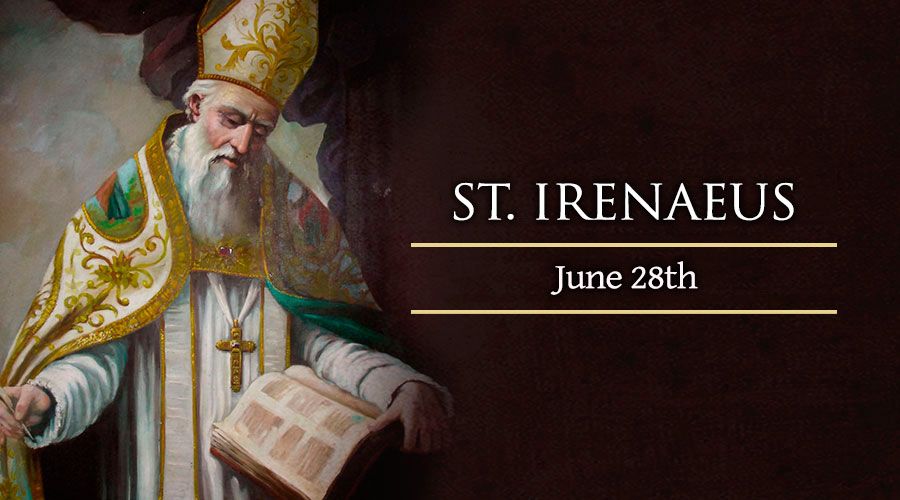 Celebrated by the Roman Catholic Church on June 28, and by Eastern Catholics of the Byzantine tradition on August 23, Saint Irenaeus of Lyons was a second-century bishop and writer in present-day France.

He is best known for defending Christian orthodoxy, especially the reality of Christ’s human incarnation, against the set of heresies known as Gnosticism.

Pope Benedict XVI spoke admiringly of St. Irenaeus in a 2007 general audience, recalling how this early Church Father “refuted the Gnostic dualism and pessimism which debased corporeal realities. He decisively claimed the original holiness of matter, of the body, of the flesh no less than of the spirit.”

“But his work went far beyond the confutation of heresy: in fact, one can say that he emerges as the first great Church theologian who created systematic theology; he himself speaks of the system of theology, that is, of the internal coherence of all faith.”

While some of St. Irenaeus’ most important writings have survived, the details of his life are not as well-preserved. He was born in the Eastern half of the Roman Empire, likely in the Aegean coastal city of Smyrna, probably around the year 140. As a young man he heard the preaching of the early bishop (and eventual martyr) Saint Polycarp, who had been personally instructed by the Apostle John.

Irenaeus eventually became a priest, and served in the Church of Lyons (in the region of Gaul) during a difficult period in the late 170s. During this time of state persecution and doctrinal controversy, Irenaeus was sent to Rome to provide Pope St. Eleutherius with a letter about the heretical movement known as Montanism. After returning to Lyons, Irenaeus became the city’s second bishop, following the martyrdom of his predecessor Saint Pothinus.

In the course of his work as a pastor and evangelist, the second Bishop of Lyon came up against various heretical doctrines and movements, many of which sounded a common note in their insistence that the material world was evil and not part of God’s original plan. The proponents of these ideas often claimed to be more deeply “enlightened” or “spiritual” than ordinary Christians, on account of their supposed secret knowledge (or “gnosis”).

Irenaeus recognized this movement, in all its forms, as a direct attack on the Catholic faith. The Gnostics’ disdain for the physical world was irreconcilable with the Biblical doctrine of creation, which stated that God had made all things according to his good purpose. Gnostics, by contrast, saw the material world as the work of an evil power, crediting God only with the creation of a higher and purely spiritual realm.

In keeping with its false view of creation, Gnosticism also distorted the concept of redemption. The Church knew Christ as the savior of the world: redeeming believers’ bodies and souls, and investing creation with a sacramental holiness. Gnostics, meanwhile, saw Jesus merely as saving souls from the physical world in which they were trapped. Gnostic “redemption” was not liberation from sin, but a supposed promise of release from the material world.

Irenaeus refuted the Gnostic errors in his lengthy book “Against Heresies,” which is still studied today for its historical value and theological insights. A shorter work, the “Proof of the Apostolic Preaching,” contains Irenaeus’ presentation of the Gospel message, with a focus on Jesus Christ’s fulfillment of Old Testament prophecies. Several of his other works are now lost, though a collection of fragments from them has been compiled and translated.

St. Irenaeus’ earthly life ended around 202 – possibly through martyrdom, though this is not definitively known.