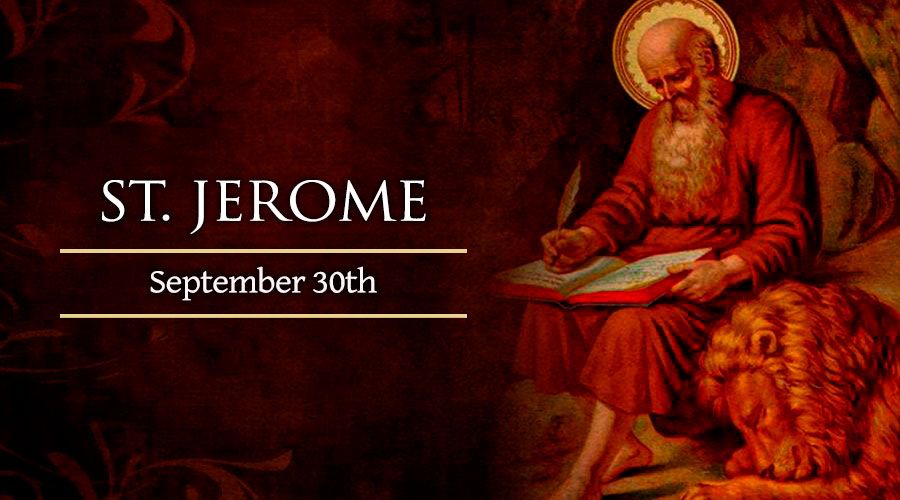 Saint Jerome, the priest, monk and Doctor of the Church renowned for his extraordinary depth of learning and translations of the Bible into Latin in the Vulgate, is celebrated by the Church with his memorial today, September 30.

Besides his contributions as a Church Father and patronage of subsequent Catholic scholarship, Jerome is also regarded as a patron of people with difficult personalities—owing to the sometimes extreme approach which he took in articulating his scholarly opinions and the teaching of the Church. He is also notable for his devotion to the ascetic life, and for his insistence on the importance of Hebrew scholarship for Christians.

Born around 340 as Eusebius Hieronymous Sophronius in present-day Croatia, Jerome received Christian instruction from his father, who sent him to Rome for instruction in rhetoric and classical literature. His youth was thus dominated by a struggle between worldly pursuits --which brought him into many types of temptation-- and the inclination to a life of faith, a feeling evoked by regular trips to the Roman catacombs with his friends in the city.

Baptized in 360 by Pope Liberius, Jerome traveled widely among the monastic and intellectual centers of the newly Christian empire. Upon returning to the city of his birth, following the end of a local crisis caused by the Arian heresy, he studied theology in the famous schools of Trier and worked closely with two other future saints, Chromatius and Heliodorus, who were outstanding teachers of orthodox theology.

Seeking a life more akin to the first generation of “desert fathers,” Jerome left the Adriatic and traveled east to Syria, visiting several Greek cities of civil and ecclesiastical importance on the way to his real destination: “a wild and stony desert ... to which, through fear or hell, I had voluntarily condemned myself, with no other company but scorpions and wild beasts.”

Jerome's letters vividly chronicle the temptations and trials he endured during several years as a desert hermit. Nevertheless, after his ordination by the bishop of Antioch, followed by periods of study in Constantinople and service at Rome to Pope Damasus I, Jerome opted permanently for a solitary and ascetic life in the city of Bethlehem from the mid-380s.

Jerome remained engaged both as an arbitrator and disputant of controversies in the Church, and served as a spiritual father to a group of nuns who had become his disciples in Rome. Monks and pilgrims from a wide array of nations and cultures also found their way to his monastery, where he commented that “as many different choirs chant the psalms as there are nations.”

Rejecting pagan literature as a distraction, Jerome undertook to learn Hebrew from a Christian monk who had converted from Judaism. Somewhat unusually for a fourth-century Christian priest, he also studied with Jewish rabbis, striving to maintain the connection between Hebrew language and culture, and the emerging world of Greek and Latin-speaking Christianity. He became a secretary of Pope Damasus, who commissioned the Vulgate from him. Prepared by these ventures, Jerome spent 15 years translating most of the Hebrew Bible into its authoritative Latin version. His harsh temperament and biting criticisms of his intellectual opponents made him many enemies in the Church and in Rome and he was forced to leave the city.

Jerome went to Bethlehem, established a monastery, and lived the rest of his years in study, prayer, and ascetcism.

After living through both Barbarian invasions of the Roman empire, and a resurgence of riots sparked by doctrinal disputes in the Church, Jerome died in his Bethlehem monastery in 420.

Pro-life groups must 'wake up' in support of pro-life Democrats, former congressman says