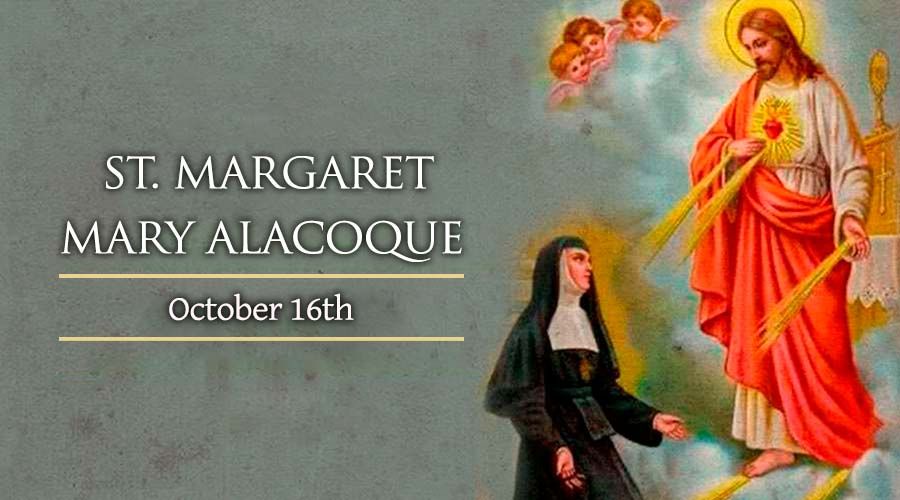 On Oct. 16, Roman Catholics celebrate the life of St. Margaret Mary Alacoque, the French nun whose visions of Christ helped to spread devotion to the Sacred Heart throughout the Western Church.

Margaret Mary Alacoque was born in July of 1647. Her parents Claude and Philiberte lived modest but virtuous lives, while Margaret proved to be a serious child with a great focus on God. Claude died when Margaret was eight, and from age 9-13 she suffered a paralyzing illness. In addition to her father's death as well as her illenss, a struggle over her family's property made life difficult for Margaret and her mother for several years.

During her illness, Margaret made a vow to enter religious life. During adolescence, however, she changed her mind. For a period of time she lived a relatively ordinary life, enjoying the ordinary social functions of her day and considering the possibility of marriage.

However, her life changed in response to a vision she saw one night while returning from a dance, in which she saw Christ being scourged. Margaret believed she had betrayed Jesus, by pursuing the pleasures of the world rather than her religious vocation, and a the at the age of 22, she decided to enter a convent.

Two days after Christmas of 1673, Margaret experienced Christ's presence in an extraordinary way while in prayer. She heard Christ explain that he desired to show his love for the human race in a special way, by encouraging devotion to “the heart that so loved mankind.”

She experienced a subsequent series of private revelations regarding the gratitude due to Jesus on the part of humanity, and the means of responding through public and private devotion, but the superior of the convent dismissed this as a delusion.

This dismissal was a crushing disappointment, affecting the nun's health so seriously that she nearly died. In 1674, however, the Jesuit priest Father Claude de la Colombiere became Margaret's spiritual director. He believed her testimony, and chronicled it in writing.

Fr. de la Colombiere – later canonized as a saint – left the monastery to serve as a missionary in England. By the time he returned and died in 1681, Margaret had made peace with the apparent rejection of her experiences. Through St. Claude's direction, she had reached a point of inner peace, no longer concerned with the hostility of others in her community.

In time, however, many who doubted her would become convinced as they pondered what St. Claude had written about the Sacred Heart. Eventually, her own writings and the accounts of her would face a rigorous examination by Church officials.

By the time that occurred, however, St. Margaret Mary Alacoque had already gained what she desired: “To lose myself in the heart of Jesus.” She faced her last illness with courage, frequently praying the words of Psalm 73: “What have I in heaven, and what do I desire on earth, but Thee alone, O my God?”