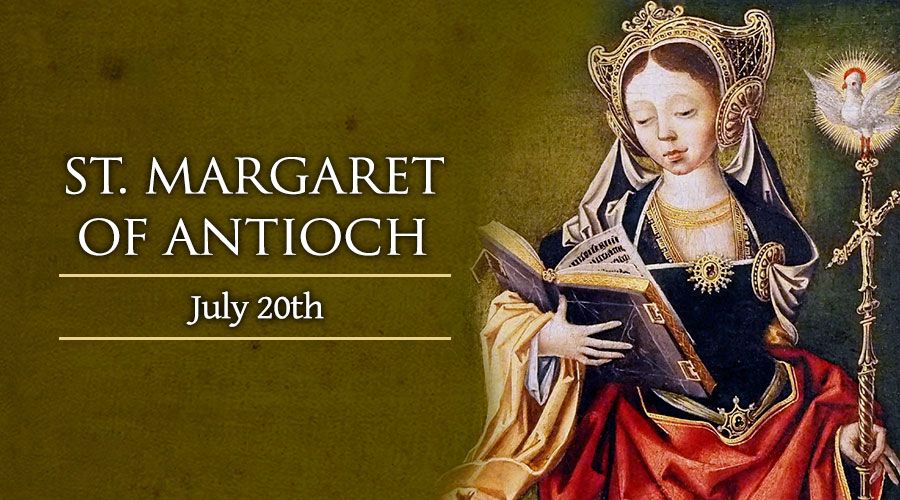 Saint Margaret, whose feast is celebrated on July 20, is a virgin and martyr. She is also called "Marina". Margaret belonged to Pisidian Antioch in Asia Minor, where her father was a pagan priest. Her mother died soon after Margaret's birth, so she was nursed by a pious woman who lived about five or six leagues from Antioch. Having embraced Christianity and consecrated her virginity to God, she was disowned by her father and adopted by her nurse.

One day, while she was engaged in watching the flocks of her mistress, a lustful Roman prefect named Olybrius caught sight of her, and attracted by her great beauty sought to make her his concubine or wife. When neither cajolery nor threats of punishment could succeed in moving her to yield to his desires, he had her brought before him in public trial at Antioch. Threatened with death unless she renounced the Christian faith, the holy virgin refused to adore the gods of the empire. An attempt was made to burn her, but the flames, we are told in her Acts, left her unharmed. She was then bound hand and foot and thrown into a cauldron of boiling water, but at her prayer her bonds were broken and she stood up uninjured. Finally the prefect ordered her to be beheaded.

The Greek Church honors her under the name Marine on July13, and the Latin, as Margaret on July 20. Her Acts place her death in the persecution of Diocletian (A.D. 303-5), but in fact even the century to which she belonged is uncertain. St. Margaret is represented in art sometimes as a shepherdess, or as leading a chained dragon, again carrying a little cross or a girdle in her hand, or standing by a large vessel which recalls the cauldron into which she was plunged. Relics said to belong to the saint are venerated in very many parts of Europe; at Rome, Montefiascone, Brusels, Bruges, Paris, Froidmont, Troyes, and various other places. Curiously enough this virgin has been widely venerated for many centuries as a special patron of women who are pregnant.