St. Rita of CasciaFeast day: May 22 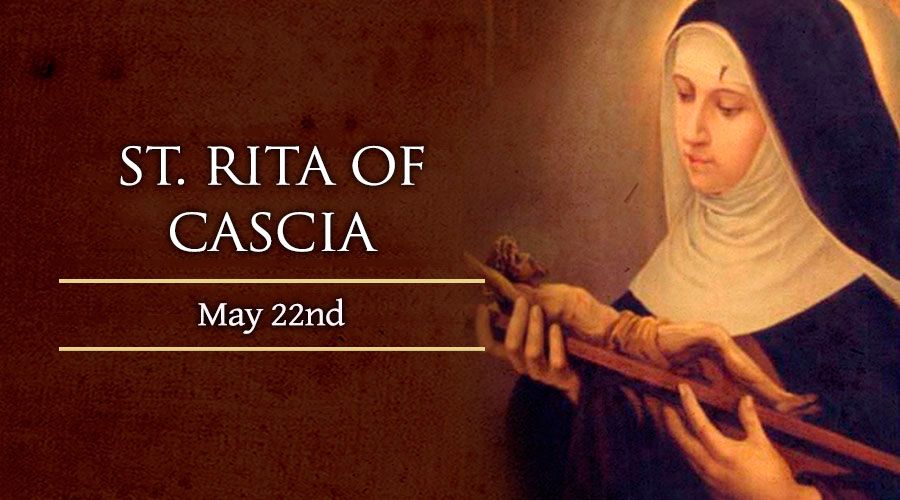 On May 22, the Church celebrates the feast day of St. Rita of Cascia, who the late John Paul II called “a disciple of the Crucified One” and an “expert in suffering.”

Known in Spain as “La Santa de los impossibiles” (the saint of the impossible), St. Rita has become immensely popular throughout the centuries. She is invoked by people in all situations and stations of life, since she had embraced suffering with charity and wrongs with forgiveness in the many trials she experienced in her life: as a wife, widow, a mother surviving the death of her children, and a nun.

Born in 1386 in Roccaparena, Umbria, St. Rita was married at the age of 12 to a violent and ill-tempered husband. He was murdered 18 years later and she forgave his murderers, praying that her twin sons, who had sworn to avenge their father’s death may also forgive. She was granted this grace, and her sons, who died young, died reconciled to God.

The saint heard the call to become a nun in the Augustinian convent at Cascia, but was refused entry at first. She asked the intercession of Sts. Augustine, Mary Magadalene and John the Baptist and was finally allowed to enter the convent where she lived the last 40 years of her life in prayer, mortification and service to the people of Cascia.

For the last 15 years of her life she received a stigmata-like thorn wound in answer to her prayers to be more profoundly conformed to the passion of the Lord Jesus. Rita was bedridden for the last four years of her life, consuming almost nothing except for the Eucharist. She died of tuberculosis at the age of 70 on May 22, 1456.

On the 100th anniversary of her canonization in 2000, Pope John Paul II noted her remarkable qualities as a Christian woman: “Rita interpreted well the 'feminine genius' by living it intensely in both physical and spiritual motherhood.”