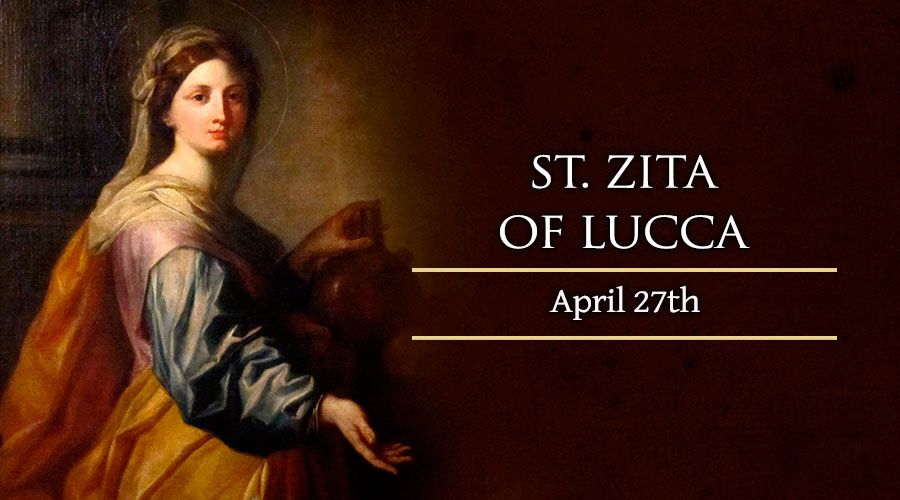 On April 27 the Catholic Church honors Saint Zita, a 13th century Italian woman whose humble and patient service to God has made her a patron saint of maids and other domestic workers.

Born into poverty during the early 1200s, Zita was taught by her mother from an early age to seek God's will in all circumstances. She had already developed a strong prayer life by the time she was sent, at age 12, to work in the home of the Fatinelli family in Lucca.

Zita's employers lived near a church where she managed – by waking up extremely early in the morning – to attend daily Mass. She looked upon her work primarily as a means of serving God, and kept herself mindful of his presence during long hours of exhausting tasks.

Her presence in the Fatinelli household, however, was inexplicably unwelcome and met with harsh treatment for a number of years. Zita suffered hostility and abuse from her employers, including fits of rage and beatings.

The young woman faced these trials with patience and inner strength developed through a life of prayer. In time, the members of the household came to value her service, and appreciate the virtues she had acquired through God's grace.

Zita maintained her humility when she was promoted to a position of responsibility within the Fatinelli home. She continued to view her earthly responsibilities as a service to God, and to seek his presence through prayer and fasting. She also refused to hold a grudge against those who once mistreated her.

Within her new household role, Zita was faithful to Christ's admonition that superiors should conduct themselves as the servants of all. She was kind to those under her direction, and mindful of the poor through frequent almsgiving to the point of personal sacrifice.

Throughout her life, Zita found a source of strength and consolation in the Mass and Holy Communion, which frequently moved her to tears. Despite her many responsibilities, she frequently set aside time to recall God's presence through contemplative prayer in the course of the day.

One anecdote relates a story of Zita giving her own food or that of her master to the poor. On one morning, Zita left her chore of baking bread to tend to someone in need. Some of the other servants made sure the Fatinelli family was aware of what happened; when they went to investigate, they claimed to have found angels in the Fatinelli kitchen, baking the bread for her.

After foretelling her own death and spiritually preparing for it, Saint Zita died in Lucca on April 27, 1271. Many residents regarded her as a saint and began to seek her intercession, to which a large number of miracles were attributed. Some writers even began referring to the city of Lucca as “Santa Zita” in her honor.

The Fatinelli family, which had once caused St. Zita such extreme suffering, eventually contributed to the cause of her canonization. The earliest account of her life was found in a manuscript belonging to the family, and published in 1688.

The Church's liturgical veneration of St. Zita was introduced in the early 1500s, and confirmed by Pope Innocent XII in 1696. In 1580, her body was exhumed and found to be miraculously incorrupt, but it has since been mummified. It is venerated today in the Basilica of St. Frediano, where she attended Mass during her life.

The Papal Foundation provides $800K in scholarships for studies in Rome