Pope Francis: ‘The Church is a great school of prayer’ Pope Francis said Wednesday that an essential task of the Church today is to teach people how to pray.

“The Church is a great school of prayer,” Pope Francis said in his general audience livestream on April 14.

“And this is an essential task of the Church: to pray and teach how to pray, to transmit from generation to generation the lamp of faith with the oil of prayer,” the pope said.

At his Wednesday audience, Pope Francis encouraged Christians to examine their lives to ensure that personal prayer is a priority. He warned that one of the devil’s tactics to attack the Church is to prevent people from praying.

“Everything in the Church originates in prayer, and everything grows thanks to prayer,” the pope said. “When the Enemy, the Evil One, wants to fight the Church, he does so first of all by trying to drain its sources by preventing it from praying.”

Speaking into the camera from the Vatican’s Apostolic Palace, the pope posed a question to everyone watching his weekly broadcast: “Do you pray?” he asked.

Pope Francis pointed out that the life of every Catholic parish is “marked by times of liturgy and community prayer,” which he called “a great patrimony.”

“After certain passages in life, we realize that without faith, we would not have been able to get through it and that prayer has been our strength. Not only our personal prayer, but also that of our brothers and sisters and of the community that accompanied and supported us, of the people who know us, of the people we ask to pray for us,” he said.

The pope encouraged people to find strength by drawing from the “inexhaustible well of Mother Church,” as each of the saints has done throughout history.

“Holy women and men do not have an easier life than others, on the contrary, they too have their problems to face and, moreover, they are often the object of opposition. But their strength is prayer, through which they always draw from the inexhaustible well of Mother Church,” he said.

“With prayer, they feed the flame of their faith, as was done with oil from lamps. And so they go on walking in faith and hope. The saints, who often count for little in the eyes of the world, are actually those who support it, not with the weapons of money and power, media communications, and so on, but with the weapons of prayer.”

The pope explained that the strength found in prayer together is why “communities and groups dedicated to prayer flourish continuously in the Church.”

“In the Church there are monasteries, convents, hermitages, where people consecrated to God live, and these often become centers of spiritual light,” he said. “They are communities of prayer that radiate spirituality.”

The pope said that these “small oases where intense prayer is shared” are vital cells not only of the Church, but for society itself.

“Let us think, for example, of the role that monasticism played in the birth and growth of European civilization, and also in other cultures. Praying and working in community keeps the world going. It is an engine,” Pope Francis said.

Pope Francis stressed that without prayer, the Church becomes “like an empty shell” in which no effective changes take place and which loses its direction to evangelize.

He said: “In Luke's Gospel, Jesus poses a dramatic question that always makes us reflect: ‘When the Son of man comes, will he find faith on earth?’”

“Or will he find only organizations, such as a group of ‘entrepreneurs of the faith,’ all well organized, who do many things for charity … but will he find faith?” the pope asked. 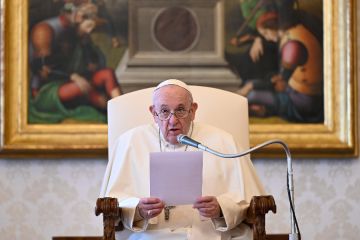 At this morning’s general audience, Pope Francis said that the communion of saints means that Christians are never alone in the darkest moments of their lives.

Pope Francis: It is our Christian duty to help people know Jesus

Pope Francis said Sunday it is our Christian duty to help people know Jesus, which we cannot do without giving of our lives in service and love.