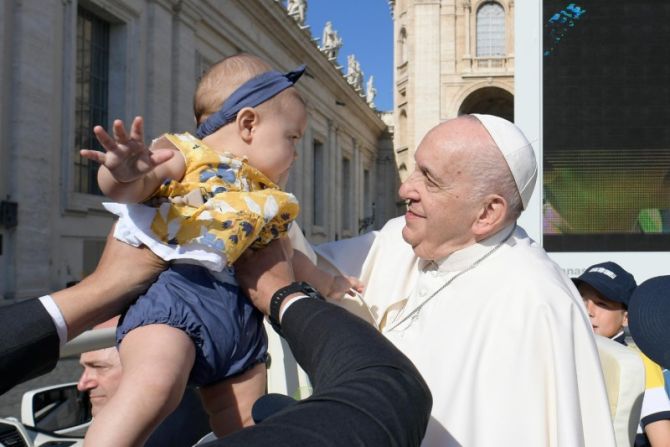 Pope Francis’ Angelus address on Sunday marked a substantial change of pace in the diplomatic action of the Holy See concerning the Ukraine conflict.

The pope stressed that in Ukraine, “there is no military operation, but a war which sows death, destruction, and misery.” He thanked journalists “who put their lives at risk to provide information,” saying that their service “allows us to be close to the tragedy of that population and enables us to assess the cruelty of a war.”

He also announced that he was sending two cardinals to Ukraine to bring his presence among refugees, displaced people, and others in need.

The appeal at the end of the Angelus was constructed in such a way as to answer many of the questions that have emerged in recent days.

First, by saying that the conflict is not a simple “military operation,” Pope Francis effectively denied the Russian narrative, which not only avoids the word “war” but goes as far as punishing journalists who use the term with jail.

A law approved by the Duma, the Russian parliament, threatens those who spread “fake news” with 15 years in prison, including those who speak of “war” or “aggression against Ukraine” and not of a special military operation. The law is why some of the most important international newspapers have withdrawn their correspondents from Moscow.

Thus, the pope’s praise of journalists’ courage suggested a clear stance against this development, though some observers argued that his words did not relate to journalists in Russia but only those reporting on the war from Ukraine.

The media have noted that since the start of the full-scale Russian invasion of Ukraine on Feb. 24, the pope has never used the words “Russia” or “aggression” in his public statements. But this is perhaps a marginal issue that should not make us lose sight of the fact that, with his Angelus address of March 6, Pope Francis made a substantial change to the diplomatic line that the Holy See has held up to now.

Suffice it to recall that on Feb. 24, in a completely unusual way, the pope visited the Russian Federation’s embassy to the Holy See to show his concern at the conflict and call for the humanitarian crisis to be addressed, according to the Russian ambassador to the Holy See, Aleksandr Avdeev.

It was striking that the pope did not call the ambassador to the Vatican, as is the norm for a head of state. Summoning the ambassador, however, could also have turned out to be too strong a signal, and the pope may have wanted to show his pastoral concern by making the trip to the embassy.

The Vatican has not, however, explained why Pope Francis did not also visit the Ukrainian embassy to the Holy See, currently led by a lower-ranking official. At the time, the elected ambassador, Andriy Yurash, remained in Ukraine because of the war (he hasn’t had the opportunity to present his credential letters to the pope.)

The visit was then rebalanced by two papal phone calls: one to Major Archbishop Sviatoslav Shevchuk on Feb. 25 and another to Ukrainian President Volodymyr Zelenskyy a day later. But the impression of unbalanced attention to Russia remained.

Still, the pope’s choice was a sign of a precise diplomatic decision. From the start of his pontificate in 2013, he has wanted to keep open a channel of dialogue with Russia. Not surprisingly, President Vladimir Putin has been received by Pope Francis three times, in 2013, 2015, and 2019.

The themes of the meetings were the situation of Christians in Syria and the Middle East, the crisis of Christian values ​​in Western societies, disarmament, and the international scenario — as well the conflict in Ukraine, which found the Holy See and Russia in distant positions.

In short, relations were good, although the Holy See continued to pay close attention to the situation in Ukraine. Parolin visited the country in 2016 and returned for a brief trip last year to celebrate the nation’s 30 years of independence.

In 2017, Cardinal Leonardo Sandri, prefect of the Vatican Congregation for the Eastern Churches, spent six days in Ukraine, coming very close to the conflict zone in eastern Ukraine. He visited Kramatorsk, a city that saw clashes between the Ukrainian armed forces and pro-Russian militants in 2014.

In July 2019, Pope Francis summoned the bishops and members of the Synod of the Ukrainian Greek Catholic Church for an inter-dicasterial meeting at the Vatican. During his intervention, Parolin used the word “war” in no uncertain terms to describe the conflict in Ukraine. Pope Francis used the word in his intervention at that meeting. He also spoke of a “hybrid” conflict in his speech to the prelates of the Ukrainian Greek Catholic Church.

Therefore, there can be no doubt that the Holy See was well aware of the situation in the region. But as Russian forces began the full-scale invasion, the pope preferred not to go directly into the question. It was a strategic choice, typical of pontifical diplomacy. The pope tries not to take precise positions because he always favors opening dialogue.

Indeed, Parolin spoke with the Russian Foreign Minister Sergey Lavrov on March 8, conveying the pope’s profound concern about the war.

At the same time, Parolin referred to “the war unleashed by Russia against Ukraine” in an interview with four Italian newspapers on Feb. 28.

The reference to the “legitimate aspirations of everyone” also represented an opening to consider Russian interests in an evolving situation.

On March 2, Sandri participated in a prayer meeting for peace in Ukraine at Rome’s Ukrainian Greek Catholic cathedral, at which he lamented the “unjustified invasion.”

On March 5, Archbishop Claudio Gugerotti, nuncio to the United Kingdom, attended a pro-Ukraine demonstration in London’s Trafalgar Square. The nuncio, who was the pope’s ambassador to Ukraine from 2015 to 2020, said: “We are all Ukrainians.” His words, it can be said, also represented the sentiments of Pope Francis, who authorized the nuncio’s presence at the event.

In short, there has been a double track: on the one hand, the prudence of the pope, who obstinately seeks dialogue, especially from a humanitarian point of view; on the other, Vatican officials who use harsher terms about the situation in Ukraine, even while trying not to mention Russia.

The Holy See, in fact, never tries to enter into a diplomatic confrontation and never breaks diplomatic relations with a country. Nor does it withdraw ambassadors, unless they are thrown out.

What, then, led to Pope Francis’ decision to take a different tack on the Ukrainian question last Sunday?

There is one detail that should not be overlooked. On March 5, Archbishop Giovanni d’Aniello, the apostolic nuncio to Russia, visited the Russian Orthodox leader Patriarch Kirill of Moscow.

According to a communique from the Moscow patriarchate, Kirill noted that the “moderate and wise position of the Holy See” on many international issues was “consistent with the position of the Russian Orthodox Church.”

He also stressed that “it is very important that the Christian churches, including our churches, should not become, voluntarily or involuntarily, sometimes without any will, participants in those complex, contradictory and conflicting trends that are present on the world agenda today.”

In practice, Kirill has taken a position of non-condemnation of the war and indirectly criticized the other Orthodox Churches. But unlike the Moscow patriarchate, many of these Churches have instead taken a clear-cut position, helping to redefine intra-Orthodox relations.

The Holy See did not want to be dragged into a situation of total neutrality or tacit support for the war. Therefore, all the initiatives so far undertaken testify that the Holy See is constantly focused on the Ukraine crisis. Pope Francis receives daily direct information from the ground, starting with the video messages that are broadcast each day from Kyiv by Major Archbishop Shevchuk.

These situations have contributed to a decisive change of pace in papal diplomacy. Pope Francis’ words at the Angelus certified to the world that neither the pope nor the Holy See is blind, and indeed they know the situation well. They want to signal that there is a diplomatic courtesy of the Holy See and the will to engage in dialogue. Still, there is not necessarily an alignment on Russian positions.

In this way, papal diplomacy clears the field of any possible over-interpretation. This is a way also for it to become a more credible partner for mediation. Indeed, in a March 7 interview with TV2000, the Italian bishops’ television station, Parolin underlined that the Holy See is willing to mediate, remembering however that the intervention of the Holy See does not end there.

“The intervention of the Holy See,” he explained, “takes place on several levels. First, the religious level is to invite an insistent prayer so that God may give peace to that tormented land and to involve believers in this choral prayer.”

“Then there is the humanitarian aspect, especially through Caritas and the dioceses, which are very committed to welcoming refugees who come from Ukraine.”

“And then, there is the availability of diplomatic initiatives. We have offered, as the pope said, the willingness of the Holy See to help in all ways to be able to stop the weapons and violence and negotiate a solution. And various attempts are taking place around the world.” The Vatican’s secretary of state “conveyed Pope Francis’ deep concern about the ongoing war in Ukraine.”