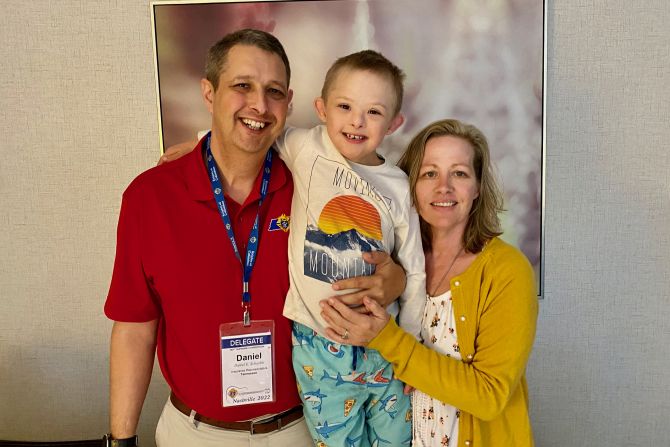 Daniel and Michelle Schachle with their son, Michael McGivney Schachle, 7, at the annual convention of the Knights of Columbus held Aug. 1-4, 2022, in Nashville, Tennessee. | Joe Bukuras/CNA

Seated in a small black wagon pulled by his father, 7-year-old Michael McGivney Schachle happily rolled along the hallways of the Gaylord Opryland Resort & Convention Center in Nashville last week, innocently unaware that people were staring at him in awe as he passed by.

His parents noticed. They’re used to it by now.

“He's like a living relic,” his mother Michelle Schachle said.

Numerous U.S. prelates and other Catholic dignitaries attended the Knights of Columbus’ annual convention at the hotel on Aug. 1-4. But few could match Michael’s star power, which radiated from his megawatt smile.

For good reason: Michael, whose family lives in Dickson, Tennessee, is the boy whose miraculous healing in his mother’s womb from a life-threatening condition led Pope Francis to beatify Father Michael McGivney, founder of the Knights of Columbus, placing him one step from sainthood.

Michael’s parents — his father Daniel is a knight and an insurance agent for the fraternal order — spoke to CNA at the convention about their son, their faith, and the miracle that will follow Michael for the rest of his life.

Michelle found out that she was pregnant with Michael, the couple’s thirteenth child, in December 2014. It was only one month later that Michael, who was originally intended to be named Benedict after Michelle’s grandfather, was diagnosed with Down syndrome.

In February 2015, an ultrasound revealed another complication: Michael had a rare condition called hydrops fetalis, in which fluid builds up in the baby’s tissues and organs, causing swelling. The doctor told Michelle that the baby’s condition was fatal and encouraged her to abort the child.

According to Michelle, the diagnosing doctor said that she had worked at the hospital for 30 years and had never seen a child survive as severe a case of the condition as Michael had.

“Daniel wanted a percentage [for chances of the child’s survival] and he was hoping she'd say like 10% or 15%,” Michelle recounted.

Because of their Catholic faith, however, abortion was not an option.

So, the couple turned to prayer.

It was Daniel who decided to seek the help of Father McGivney (1852-1890), an Irish-Catholic priest who ministered to immigrant families in New Haven, Connecticut, and founded the Knights as a mutual aid and fraternal insurance organization.

“Father McGivney, we both need a miracle. Please pray if it's God's will that this cup will pass from me and that my son will be healed. But not our will, but his will be done,” Daniel says he prayed, kneeling in his bedroom, the night after the diagnosis.

Daniel said he promised that if his son were cured, the boy would be named after the Knights’ founder.

He had not consulted with this wife on that part of the deal, however.

“She was like, ‘We're gonna name him Benedict. You can't change his name!’”

The next day the couple began asking their friends to pray for their son’s healing through Father McGivney’s intercession.

Despite the dire diagnosis, the couple decided to go forward with a pre-planned pilgrimage to Europe sponsored by the Knights.

The couple said they were given many signal graces on the trip. One of those graces came in Rome, while their priest, Father Michael Fye, offered Mass at the Vatican. Daniel said that the priest chose a random chapel in the church to celebrate Mass, and it turned out to be the same chapel that the Knights of Columbus had paid to restore an image of the Blessed Virgin Mary, Our Lady of Help, a few years earlier.

As the couple was praying for a miracle during Holy Mass, they were astounded by the scripture reading of the day from the fourth chapter of the Gospel of John. In the reading, a royal official whose son was sick in Capernaum asks Jesus to heal the boy.

Jesus responds, “You may go; your son will live.” Hearing those words, the Schachles were stunned. Daniel’s jaw dropped.

“There were just a thousand little things like that that happened on the trip,” Daniel said. “So, by the time we left, I was almost sure that God had done something because of all of those signs.”

‘A kiss from God’

When the couple arrived back home, Michelle went for her next ultrasound. What she saw that day would later be accepted as evidence in support of McGivney’s beatification.

After reviewing the image, Dr. Mary Carroll told Michelle that she would need to see a certain pediatrician with expertise in caring for Down syndrome pregnancies because the baby could be born a month early.

Confused, Michelle said that she thought the baby had a 0% chance of survival and that there was no hope.

“Honey, you just came back from Fatima. There's always hope,’” Michelle remembers the doctor telling her. Their son still had Down syndrome, but the ultrasound showed there was no trace of hydrops.

It was that day that the child received the name Michael McGivney Schachle, Michelle said.

Michelle began to weep. But according to Michelle, Carroll said to her, “Sweetheart, don't cry. That's the prettiest baby I've ever seen in my life.”

Michael was born on May 15, 2015. Providentially, May 15 is the anniversary of the chartering of the first Knights of Columbus council.

The Schachles have other curious connections to McGivney: Michelle and McGivney have the same birthday, and both Michael and McGivney were born into families of 13 children. The family also had named their homeschool after McGivney.

Today, “Mikey,” as he’s known, loves making people laugh with his jokes. He knows he was healed in his mommy’s tummy and says he loves God.

And those who know his incredible story stop and smile when he’s around.

On Aug. 2, Supreme Knight Patrick Kelly made a special mention of the Schachles in his annual address. A large video screen showed Daniel raising his smiling son in the air.

Seeing him, his mother says, is like “a little kiss from God — proof that God exists and that he loves you.” Larry Tutt, known to D.C. locals for spreading kindness on a street corner, was remembered at a Mass at the Catholic Information Center on Aug. 5. The band, made up of Dominican friars, played the Grand Ole Opry on Aug. 1.