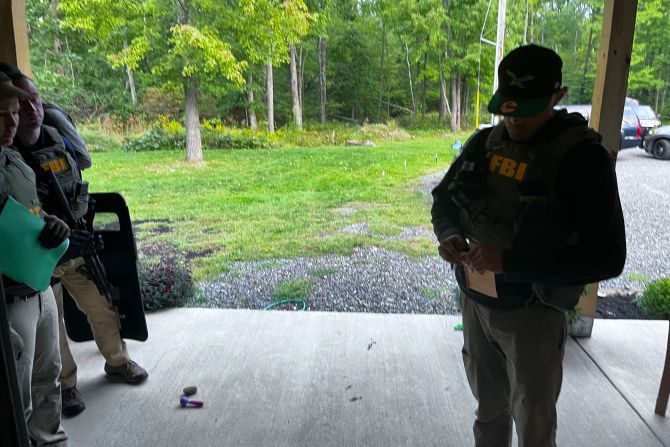 An FBI agent stands outside the Houck residence in Kintnersville, Pennsylvania, on Sept. 23, 2022. Mark Houck was arrested that day and charged with assaulting a Planned Parenthood escort outside an Philadelphia abortion clinic on Oct. 13, 2021. | Courtesy of the Houck family

The FBI is disputing published accounts of a “SWAT” raid on a pro-life Catholic family’s home in Pennsylvania last week.

The alleged circumstances of the Sept. 23 arrest of Mark Houck, a 48-year-old father of seven, have led to a public outcry about what many view as an unnecessarily aggressive show of force.

“A SWAT team of about 25 came to my house with about 15 vehicles and started pounding on our door,” she said.

“There are inaccurate claims being made regarding the arrest of Mark Houck,” the FBI’s Philadelphia office said in a statement.

“No SWAT Team or SWAT operators were involved. FBI agents knocked on Mr. Houck’s front door, identified themselves as FBI agents, and asked him to exit the residence. He did so and was taken into custody without incident pursuant to an indictment,” the statement continued.

An FBI spokesman declined to answer CNA’s questions about the number of law enforcement personnel at the scene and whether any drew their weapons and pointed them at the family.

“Extensive planning takes place prior to the service of any federal warrant. The FBI then employs the personnel and tactics deemed necessary to effect a safe arrest or search,” the statement said.

“While it’s the FBI’s standard practice not to discuss such operational specifics, we can say that the number of personnel and vehicles widely reported as being on scene Friday is an overstatement, and the tactics used by FBI personnel were professional, in line with standard practices, and intended to ensure the safety of everyone present in and outside the residence,” the statement concluded.

Brian Middleton, who has acted as the Houck family’s spokesperson, responded to the FBI’s statement.

“They’re turning this into a technical conversation about the representation of a woman who on Friday morning was awakened by a bunch of FBI agents armed with automatic weapons, some of them with body armor … pointing automatic weapons at her and her husband when they arrived in front of their children,” Middleton told CNA.

“This is absurd. If they’re not going to tell us the number, what they’re trying to do is make it look as if the Houcks aren’t telling the truth,” he said. “This isn’t a math contest. The issue is excessive force for the crime of maybe pushing another person.”

Middleton noted that publicist Tom Ciesieka will be taking over the role of family spokesman.

Mark Houck, the founder and co-president of a men’s spiritual formation apostolate called The King’s Men, faces the possibility of 11 years in prison if convicted of violating the federal Freedom of Access to Clinic Entrances Act, more commonly referred to as the FACE Act.

The law carries stiff penalties for those who engage in “violent, threatening, damaging, and obstructive conduct intended to injure, intimidate, or interfere with the right to seek, obtain, or provide reproductive health services,” according to the Department of Justice.

A federal indictment accuses Houck of twice assaulting a Planned Parenthood client escort, identified in the document as “B.L.,” outside a Philadelphia abortion clinic on Oct. 23, 2021.

Houck regularly prays the rosary, hands out literature, and “does some sidewalk counseling” outside the clinic, his wife told CNA.

Mark Houck maintains that he pushed the clinic escort away from Houck’s then 12-year-old son because the man was verbally harassing the boy, Middleton told CNA.

The man fell down but was not seriously hurt, Middleton said, requiring only “a Band-Aid on his finger.”

Middleton said the altercation was captured on camera, though he said Sunday that the Houcks were still trying to locate the video.

Middleton said after local authorities declined to press charges, the escort pressed charges in Philadelphia municipal court, but the case was dismissed when the man repeatedly failed to show up for court dates.

As of Monday afternoon, an online fund drive for the Houck family has raised more than $191,000.

Houck’s arraignment on the charges is scheduled for Tuesday in federal court in Philadelphia. In a press release issued Monday, the Thomas More Society nonprofit legal firm announced it is representing Houck.

The law firm said one-on-one altercations like the one involving Houck do not fall under the federal FACE Act, citing a decision in a similar case Thomas More lawyers won in June 2019 on behalf of a sidewalk counselor.

“This case is being brought solely to intimidate people of faith and pro-life Americans,” Peter Breen, a Thomas More vice president and senior counselor, said in a statement. “Mark Houck is innocent of these lawless charges, and we intend to prove that in court.”

The law firm said it informed the Department of Justice in June that if Houck were charged he would turn himself in voluntarily.

“Rather than accepting Mark Houck’s offer to appear voluntarily, the Biden Department of Justice chose to make an unnecessary show of potentially deadly force, sending 20 heavily armed federal agents to the Houck residence at dawn this past Friday,” Breen said.

“In threatening form, after nearly breaking down the family’s front door, at least five agents pointed guns at Mark’s head and arrested him in front of his wife and seven young children, who were terrified that their husband and father would be shot dead before their eyes.”

Accounts of how Houck was taken into custody have been met with sharp criticism from GOP lawmakers, including Sen. Ted Cruz of Texas and Sen. Josh Hawley of Missouri.

“I want to know from Merrick Garland directly why Biden’s DOJ is arresting Catholic protestors like terrorists — complete with SWAT-style tactics — while letting actual terrorist acts like firebombings go unpunished,” Hawley said in a tweet.

William Donohue, president of the Catholic League, wrote a letter to Republican Sen. Chuck Grassley of Iowa, a ranking member of the Committee on the Judiciary, imploring him to “get to the bottom of this duplicity.”

“I am not in a position to judge the veracity of the account offered by the FBI or Houck. But it surely seems that the FBI overreacted in its handling of this matter. Houck had seven children at home as the SWAT team pounded on his door, showing up fully armored, yelling at him to open it,” Donohue wrote.

“This kind of overreaction for a minor infraction of the law is deeply troubling, and it becomes even more troubling when paired with the underreaction by the Department of Justice when the pro-life side is targeted,” the letter said.

“Not only did I not receive a response from the attorney general, there have been no news stories on SWAT teams crashing the homes of abortion-rights terrorists,” Donohue said in the letter to Grassley.