Michigan attorney general Dana Nessel on Thursday released a report compiling allegations of sexual abuse directed at priests in the Diocese of Marquette, stretching back to the 1940s.

Nessel said the Oct. 27 document is the first of seven from her office on sexual abuse allegations against priests in each of Michigan’s Catholic dioceses.

“Since the very start of my term, I pledged to use the resources of my department to ensure that every case of sexual abuse and assault is thoroughly reviewed, and that whenever we are able to pursue justice, we do so relentlessly and aggressively,” Nessel, a Democrat who is running for re-election, said in a video statement accompanying the report.

“In the end, we hope this report provides a voice to those who have suffered in silence for so long and shines a light on those alleged offenders who escaped punishment for their crimes by hiding in the shadows.”

The report names 44 priests who ministered in Marquette who have been accused of abuse or grooming behavior since the 1940s. Thirty-two of the 44 priests named in the report are known or presumed to be deceased.

Of the 44, six are accused of sexual misconduct with adults 18 and over. Two of the 12 living priests have been charged criminally. One was convicted and the other’s trial is still pending. Neither priest is in active ministry.

The 149-page report does not represent an investigation into the credibility of the allegations it chronicles. Rather, the report is a compilation of information obtained from a tip line set up by the attorney general’s office, victim interviews, police investigations, open-source media, paper and electronic documents seized from the diocese, and reports of allegations disclosed by the diocese.

“The information is being released to the public as an acknowledgment to the victims of these alleged crimes and as a public accounting of the resources allocated to the Department of Attorney General to investigate and prosecute clergy abuse,” Nessel said in her Thursday announcement. She said her office has hired and trained a full-time victim advocate to support the victims of the alleged abuse.

Marquette Bishop John F. Doerfler issued a statement on the report in advance of a planned news conference Thursday.

“Words fall short when attempting to speak about something as sobering and disturbing as the report released earlier today by the Office of the Michigan Attorney General concerning its investigation into clergy sexual abuse in the Diocese of Marquette. However, something must be said, and our work to stamp out this grave evil must continue,” he said.

“On behalf of the Church, I offer a sincere apology to anyone who has been abused by clergy in the Catholic Church. You are, and should have been, our priority. There is no excuse for what happened to you. It is especially grievous if your voice was not heard. Thank you to those who have courageously come forward to bring light to this darkness which has brought about so much harm.”

In the statement, the bishop went on to highlight the limitations of the attorney general’s report.

“The Attorney General’s Report lists allegations without making any determination whether the allegations are credible or substantiated. However, you should know that no priest or deacon of the Diocese of Marquette with a substantiated allegation of sexual abuse of a minor is in active ministry. In fact, the last alleged incident known to the diocese of sexual abuse of a minor by a priest in active ministry was 25 years ago,” Doerfler said.

The bishop emphasized that the diocese has determined that an allegation against one of the priests named in the report — Father Mark McQuesten, a senior priest still in active ministry — was deemed not credible. He said the diocese conducted its investigation in that case under the norms for investigating alleged clergy sexual abuse established by the U.S. bishops’ Dallas Charter in 2002.

A significant majority of the allegations in Marquette contained in the report date from before the 1980s. The last substantiated allegation of sexual abuse against a priest in active ministry in Marquette was received in 1997.

“The possible criminal prosecution of many [of] these allegations is barred by the Statute of Limitations, or because the accused priest is deceased,” Nessel said.

The Diocese of Marquette on its site detailing accused clergy lists one priest, Father Aaron Nowicki, as being on administrative leave for non-criminal improper conduct with a vulnerable adult; following his 2019 removal from ministry, the Chippewa County Sheriff’s Department announced on Aug. 16, 2021 that Nowicki was arrested in connection with a “Ghost” operation concerning child trafficking, the diocese said.

The diocese also lists three priests who were permanently removed from priestly ministry, two in 2002 and one in 1993 — additionally, two priests were laicized, one in 1992 and one in 2010. Two Franciscan friars, who served in the diocese and are now both deceased, faced substantiated allegations of sexual abuse of a minor while ministering outside the Diocese of Marquette.

Michigan's then-Attorney General Bill Schuette launched an investigation into Catholic clergy in September 2018, following the release of a Grand Jury report in Pennsylvania which detailed decades of abuse allegations against 300 Catholic priests in that state. After the announcement of the investigation, Michigan's seven dioceses said they welcomed the investigation and pledged their full cooperation.

To date, the Michigan investigation team has reviewed hundreds of tips, as well as 1.5 million paper documents and 3.5 million electronic documents seized after police executed search warrants at all seven of the state's dioceses in Oct. 2018.

Nessel said the Marquette diocese worked in partnership with the attorney general’s office to provide information and resources.

“The willingness of the Diocese to provide information was instrumental in the compilation of the report. The report was shared with the Diocese of Marquette in advance of being released to the public to ensure accuracy and completeness,” Nessel said.

The release of the Marquette report comes less than two weeks before the U.S. midterm elections on Nov. 8, during which Nessel will face three challengers for her seat.

Nessel has made the investigation of abuse among Catholic clergy a major focus of her tenure as Michigan's attorney general, and has occasionally been accused of anti-Catholic bias. She also during her term moved to shut down faith-based adoption agencies in the state, arguing that the adoption agencies’ policies favoring heterosexual couples constituted illegal discrimination. Nessel has strongly supported Michigan's Proposal 3, a move to codify abortion rights which would “establish new individual right to reproductive freedom" and has given rise to vigorous opposition from Catholics in the state.

This is a developing story and will be updated. 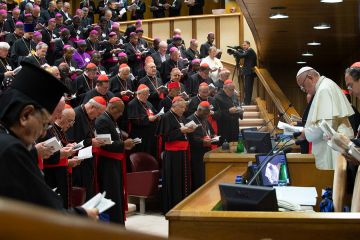 The Vatican revealed on Thursday the outline that will guide the next stage of discussions in the Synod on Synodality. The Catholic Church in England and Wales has said it will “carefully study” the contents of a national report concerning sexual abuse.