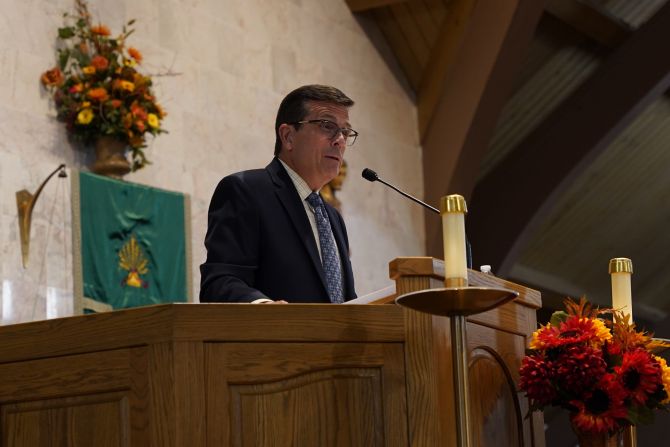 Longtime Channel 4 (WDIV-TV in Detroit) personality Chuck Gaidica speaks Oct. 27, 2022, at St. Stephen Church, part of Holy Trinity Parish in Port Huron, Michigan, about his recent reconversion to the Catholic faith of his youth. Gaidica, who spent many years as a nondenominational pastor in Detroit after his news days, said he was urged to return to the Church eight years ago by a woman at St. Stephen. | Photo by Daniel Meloy | Detroit Catholic

Chuck Gaidica has been in the TV business for more than 40 years, telling the stories of Detroiters as a well-known figure in the community.

But on a blustery fall evening at Holy Trinity Parish in Port Huron, Michigan, about 60 miles northeast of Detroit, the award-winning newsman reported on a story on which he has the ultimate scoop: his return to the Catholic Church.

“Tonight, I want to be honest with you, I want to be blunt with you, and hope I can be really encouraging,” Gaidica said Oct. 27. “Because, to borrow a phrase from the TV news business, ‘I have breaking news, but first, these messages.’”

Gaidica’s talk, “Taking the Long Way Home,” was part of a relaunched speaker series at St. Stephen Church, part of Holy Trinity Parish, that recently resumed after the COVID-19 pandemic.

It was the second time he’d spoken at St. Stephen, Gaidica said. He’d also been invited to speak in 2014, as the faith leader of a different denomination.

Gaidica, who grew up Catholic and later became a nondenominational pastor in Detroit during his television career, which included more than 30 years as an anchor and meteorologist on Channel 4 (WDIV-TV) in Detroit, acknowledged he didn’t expect to be back — especially not under these circumstances.

“I assumed the only time I would speak to this group in this place, in this parish, was eight years ago,” Gaidica said. “Then God, and a woman from this parish — or someone who was visiting that night — had a different plan, and that’s part of my story.”

Gaidica recalled telling the story about how he grew up on the northwest side of Chicago in a flat with three generations of his family.

After a successful career in TV news, he left full-time reporting to pursue a master’s degree in ministry and leadership and became the pastor of a large, nondenominational church in Novi, Michigan. He was invited to St. Stephen as part of the parish’s lecture series to discuss his faith journey and was enjoying coffee and cooking in the church when a woman approached him.

“The evening was over, I’d done my talk and answered some questions,” Gaidica said. “I was standing over by some people when this lady walked out, an older lady, older than me. She walked up, and as I extended my hand, she took my hand, grabbed my forearm and looked at me and said, ‘You have to come back to the Church.’”

The woman left before Gaidica could come up with a response. Intrigued, Gaidica later reached out to the parish to try to find her but could only remember “a woman who was wearing a coat,” he said. The parish had no idea who she was.

“Her fingerprints, which means this place’s fingerprints, are on my spiritual journey, and that’s why I’ve come back,” Gaidica said. “And I know so many people along the way, including the Hale family, who have prayed for me, because goodness knows I could use the prayer.”

“So now, breaking news, I have returned to the Catholic Church,” Gaidica said to an applauding audience.

Gaidica said the mysterious woman planted a seed in his mind about returning to his childhood faith. His conversion meant leaving the church where he was pastor and explaining his decision to his wife, his family, friends, and the congregation. But as he began to research, he couldn’t shake the thought.

“The big ‘why’ is, ‘Why did I come back to the Catholic Church?’ And the intriguing part of that question is summed up best, I think, by a quote from G.K. Chesterton,” Gaidica said. “Why I am Catholic is that there are 10,000 reasons all amounting to one reason: that Catholicism is true.”

Gaidica’s TV career has taken him all over the world and allowed him to do some incredible things, including flying with the Blue Angels and becoming a scuba-certified diver and an instrument-graded pilot. But all those things came later in his life, Gaidica said, including his decision to return to the Catholic Church at age 64.

“I am here tonight for two reasons: to say thank you,” Gaidica said. “The second is to encourage. There is a lot going on in the world right now that is crazy. There is a lot going on in the Church that is crazy. So be encouraged. Those looking for a place to find peace in a very anxious world should know about the Catholic Church. They should be encouraged. The world is filled with anxiety. Others who have fallen away from the faith, and have given up, should be encouraged. It is never too late.”

Gaidica recalled when, during his childhood, his family stopped attending Mass. After the death of his uncle, whom Gaidica described as his best friend and affectionately called “Unc,” Gaidica said he had given up on the Church.

“I look back and think, ‘Did I fix my gaze on the wrong thing?’” Gaidica said. “Was I looking for an excuse not to come back? Looking back on it now, I wish my dad had the gusto in that part of my young life, as he did later in life, to attend church, to get involved in parish life, because that would have helped me.”

“And for those of us who fix our gaze on the wrong things instead of what is true and beautiful and art-filled and real in the Catholic Church,” Gaidica said, “I urge you to take your concerns to the foot of the cross. Take them to Jesus.”

Gaidica said his faith journey became a wrestling match with God. He found solace in Protestant churches, bouncing from denomination to denomination. He never considered returning to the Catholic Church — especially after the revelations of the 2002 sexual abuse scandals in Boston and elsewhere.

Several years ago, Gaidica recalled driving in his car listening to a news report about the scandals, when he said aloud, “God, how can I ever come back to this Church?”

“And an answer came back to my head,” Gaidica said. “I did not hear a voice. I didn’t see a flash of lightning. I didn’t see a talking donkey walk up my driveway; I heard nothing. But the message came right back into my head: ‘Why not? The Church never left you.’ I had to pull my car over because the answer was true. The Church has been, is, and will always remain. It is always here. I pictured God standing with his arms saying, ‘Come on; I knew you were coming. Come on.’”

Despite living in Northville, Michigan, today, Gaidica said he jumped at the chance to tell his re-conversion story in Port Huron, where a chance encounter eight years ago with a still-unidentified woman changed his life.

“He was encouraged to come back to the Catholic Church when he was here the last time, so he actually reached out to us and asked if he could come back,” Karen Clor, coordinator of adult faith formation at Holy Trinity Parish in Port Huron, told Detroit Catholic. “Because whoever said to him, ‘Come back to the Church,’ was here, so he came back to say thanks.”

Gaidica took questions after his talk, including one from an audience member who asked what it was like breaking the news to his nondenominational church that he was rejoining the Catholic faith, and another who asked what makes him hopeful for the Church’s future.

“I think God didn’t need me back; he wanted me back,” Gaidica said. “He wants you back. All he wants for us is to be back and be all in, to be part of this rescue mission that is the greatest story ever told. So I’m encouraged. And if the Church — with Truth with a capital ‘T,’ with the Father, Son, and Holy Spirit — are all there, then they’ve got my back. I’m encouraged, and I hope you are, too.”

This story was originally published at Detroit Catholic, the news site of the Archdiocese of Detroit, and is reprinted here with permission.

Daniel Meloy is a staff reporter for Detroit Catholic. Head football coach Marcus Freeman told members of the press Sept. 15 that he had tried to keep his recent conversion to the Catholic faith under wraps.