Dozens of Catholic members of Congress issued a statement on Friday claiming that denial of Holy Communion to pro-abortion politicians... Read more

The U.S. Conference of Catholic Bishops this week voted to move forward on several action items, including a draft of... Read more U.S. bishops held extensive debate on Thursday before voting on whether to draft a teaching document on the Eucharist, at... Read more

On Thursday afternoon, the U.S. bishops are scheduled to debate and vote to begin drafting a teaching document on the... Read more

While some U.S. bishops on Wednesday pushed for no time limits in debating a motion to draft a teaching document... Read more 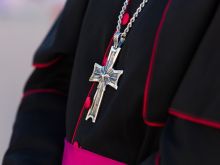 From June 16-18, 2021, the bishops of the United States will gather for their annual spring meeting, held virtually this... Read more

A poll by a Catholic advocacy group released on Tuesday found that, among Catholics who attend Mass regularly, the vast... Read more According to Vatican sources June 15, there is no meeting currently scheduled between Pope Francis and President Joe Biden. Read more This CNA explainer goes through the essential background questions about the term eucharistic coherence in preparation for the USCCB spring... Read more

While some activists claim that the U.S. bishops will be voting next week on denying Communion to President Joe Biden,... Read more

The U.S. bishops next week will deliberate and vote on whether to draft a teaching document on the Eucharist –... Read more The Archbishop of San Francisco said this week there must be a “major effort” to “recatechize” Catholics on the Eucharist... Read more

Another U.S. bishop has reproached efforts to delay discussion of “Eucharistic coherence” by the whole conference. Read more

Two U.S. archbishops on Tuesday responded to attempts by other U.S. bishops to delay consideration of a teaching document on... Read more Bishop Wall on politicians and Communion: 'Our concern is not political but pastoral'

Bishop James Wall of Gallup responded Tuesday to a recent essay from Bishop Robert McElroy, in which the Bishop of... Read more

The Archbishop of San Francisco on Monday responded to House Speaker Nancy Pelosi (D-Calif.), who said last week she was... Read more

The Bishop of Phoenix said on Thursday that he is protecting the Eucharist, not “politicizing” it, by teaching that Catholic... Read more

House Speaker Nancy Pelosi (D-Calif.) on Thursday said she was “pleased” with the Vatican’s recent letter to U.S. bishops on... Read more The prefect of the Congregation for the Doctrine of the Faith wrote Friday to the head of the US Conference... Read more