George Weigel, a Catholic American author, was born on April 17, 1951. He has written many books and articles, covering topics such as St. John Paul II, Catholicism in America, and cultural issues. Some of his works include, Witness to Hope: The Biography of St. John Paul II and most recently, Not Forgotten: Elegies For, and Reminiscences Of, a Diverse Cast of Characters, Most of Them Admirable, published in 2021. He now is a Distinguished Senior Fellow at the Ethics and Public Policy Center in Washington D.C. Some scholars and former students of Pope Emeritus Benedict XVI raised the prospect of the late pontiff’s canonization and recognition... Read more The papal biographer said the Vatican ought to realize that ‘appeasement of communist regimes never works.’ Read more 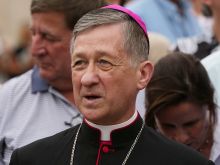 Archbishop Jose Gomez, president of the U.S. bishops' conference, showed courage in releasing a statement on the day of President... Read more Catholic author George Weigel this week praised the heroic witness displayed by members of Courage, an apostolate that ministers to... Read more The publisher of a new book by papal biographer George Weigel said Tuesday that it sent Weigel’s latest text to... Read more

Evangelizing countries where the faith has been watered down and resolving the ongoing financial crisis in the Vatican are challenges... Read more How St. John Paul II 'bent the course of history' St. John Paul II had just celebrated the closing Mass of his historic trip to his home country of Poland... Read more Materialism, 'rejection' of Christianity factors in World War I

Scholar and author George Weigel proposed that World War I was caused and prolonged not only by political struggles and... Read more George Weigel was honored Oct. 22 with the Blessed John Paul II Award for the New Evangelization, for his work... Read more